With an intricate design based on a Chinese legend, Blue Willow china is both beautiful and captivating. Whether you have some Blue Willow pieces inherited from your mother or grandmother or you're planning to start your own collection, learning more about this fascinating china pattern will make collecting it even more special.

The Story of Blue Willow China

Developed by Thomas Turner in 1779, the Blue Willow pattern eventually became a classic fixture on many tables around the world. The pattern is actually English, although it is based on similar blue landscape designs in Chinese porcelain. By the end of the 18th century, several English potteries were making Blue Willow patterns, and it immediately captivated the imaginations of consumers. Potteries continued to make Blue Willow throughout the 19th century and 20th century, and it is still made today. Part of what makes Blue Willow so popular is the story it tells in its design. 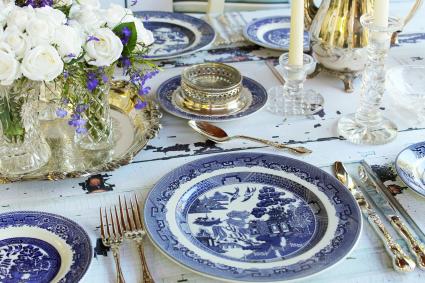 In the Blue Willow legend, a the beautiful daughter of a powerful man fell in love with her father's secretary. Discovering their love, the father banished the secretary and constructed a great fence to keep his daughter contained. She could only walk by the water and the willows. She despaired until she received a message from her lover. At a banquet, he rescued her, but her father noticed and chased them across a bridge. The got away, but years later, her father caught up with them. The secretary was killed, and the daughter died as well. In pity, the gods turned them both into doves so they could fly together forever.

Motifs on the China Pattern

Blue Willow china is highly symbolic with many motifs from this legend in the design. If you look closely, you'll see the fence the father built to keep his daughter in, the bridge he chased the lovers across, the willow and stream by which the daughter walked, and many more elements of the legend. At the top, there are two doves to represent the couple. 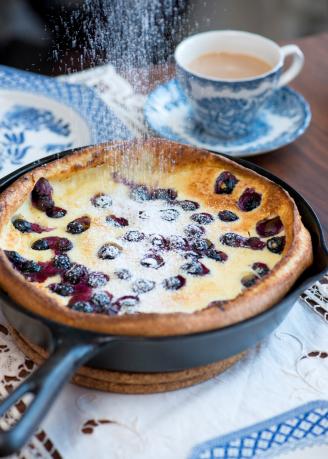 This distinctive china pattern holds an important place in antique dinnerware history, and versions of it were made by dozens of different potteries. These have subtle variations, and some are more desirable than others. Additionally, companies have made this pattern for over two hundred years; there may be as many as 500 different manufacturers spanning this long period of production. Identifying a piece of Blue Willow china can be a complex process because of all the versions out there.

Look for the Willow Pattern

There are many Chinese-inspired motifs that look similar to Blue Willow, but they may not have the characteristic pattern of the Blue Willow legend. Identifying this china pattern is easy. Look for the fence, the bridge, the two doves, the willow tree, and the stream. If it doesn't have this pattern, it isn't Blue Willow. 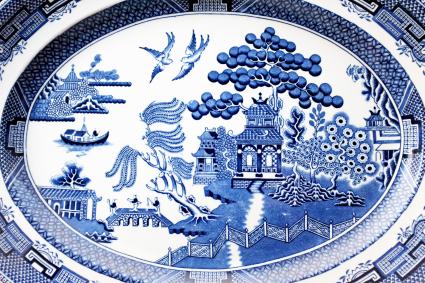 Blue Willow is a transferware pattern. Transferware is made when an engraved plate is inked and pressed onto tissue. The tissue is then used to transfer the design onto the piece. This process creates a delicate, repeating pattern, usually all one color. There may be subtle lines where the tissue was crinkled or where motifs join together. You'll usually see willowware in the classic blue color, but you may also see it in colors like pink, black, brown, and green.

Many Blue Willow pieces feature a mark, but some do not. Turn the piece over and look on the back or bottom for any stamped designs. Ruby Lane has a good listing of marks, although there are far too many to include in one spot. After 1891, English pieces will feature a country of origin mark as well. According to Blue Willow dealer Rita Entmacher Cohen, it's sometimes impossible to tell which pottery made a piece. The earliest pieces were often unmarked. Sometimes, pieces feature a small initial on the bottom that is a potter's mark. The potters might move from one pottery to another, using the same mark at different companies. A mark can help you with identification, but unless it clearly states the name of the pottery, you may need to use other clues.

Look for Clues About the Date

According to International Willow Collectors, there are some clues that can help you determine whether you have a piece of antique Blue Willow china or a modern reproduction:

The value of antique Blue Willow china is dependent on a variety of factors. Before assigning the value, take a look at the piece and see what you can find out about it.

If the piece has a maker's mark, note that. Also try to identify the type of piece you have. If it's a plate or bowl, it may be easy to find a value. Less common pieces like soup tureens and specialty items may be more challenging, but if you are able to identify these, the rarer pieces may be worth more.

Like any antique item, condition will affect the value of a piece. Look for chips, cracks, repairs, staining, and crazing. In older pieces, these condition issues may have less impact on the value, but they still matter. Items in excellent condition are worth the most. 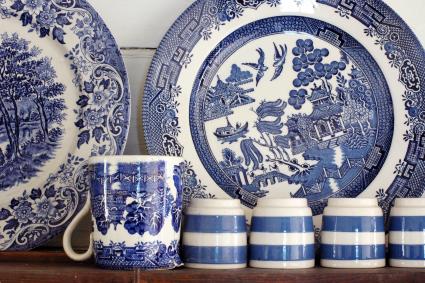 Look for Similar Pieces That Have Sold

Once you are able to identify your Blue Willow piece, you can look up the sales prices of similar pieces online. Always check the price for sold items, not for items currently listed for sale. Here are a few examples of values for recently sold Blue Willow pieces:

Have Your China Appraised

If you're in doubt about the history or value of your Blue Willow china, it's a good idea to have it appraised. Antique dish values can vary widely, and with its long and storied history, Blue Willow is a sought-after pattern that may be very valuable. Doing your research will help ensure you get a fair price for pieces you plan to sell or pay a reasonable price for those items you add to your collection.