Antique Buffalo china is a favorite for collectors. This sturdy restaurant ware comes in a variety of patterns and colors, and it's a fun item to collect. Learn how to spot a piece of Buffalo china.

According to Collectors Weekly, Buffalo china was part of the railroad china boom, which resulted in a number of companies making inexpensive china items for use on trains and in restaurants and hotels. Buffalo Pottery was founded in the earliest days of the 1900s by Larkin Soap Company. The company wanted to produce an inexpensive item to be given away with soap purchases made by their customers, similar to carnival glass and depression glass. The company wanted to make a china that competed with the English Staffordshire potteries and created what was to become one of the most popular lines for collectors, Deldare Ware. Buffalo went on to create china for both commercial and personal use. Their clients included railroads, restaurants, the military, and cruise ships. 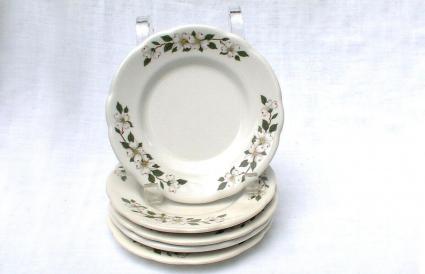 Over the years, Buffalo china explored various patterns and trends. Some of the most popular and lovely include the following.

Deldare Ware was an olive green color and had colorful scenes overlaying it. These scenes were reproduced from drawings by English watercolorist, Cecil Aldin. The Fallowfield Hunt was a sequence of images:

It was produced from 1908 to 1909 and then again in 1923 to 1925. Although it had originally been conceived as a soap premium, it was only offered in the 1922-1923 catalog. Because of this it is a relatively rare and expensive example of Buffalo China. 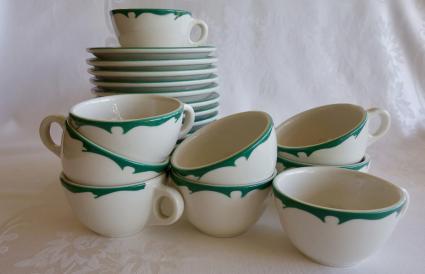 Rarer still than the Deldare is the Emerald Deldare. It was produced in 1911 for only one year and is the most highly prized of all antique Buffalo China amongst collectors. The design is classic Art Nouveau, hand painted with a floral and geometric motif on a delicate olive green background. It generally has a verse written inside the piece.

From 1911 to 1913 Buffalo produced Abino Ware. This was pale green and rust colored and included boats, windmills, and sea scenes.

The Bonrea pattern is an almost Asian motif in royal blue on a white background. It was made from 1905 to 1916. 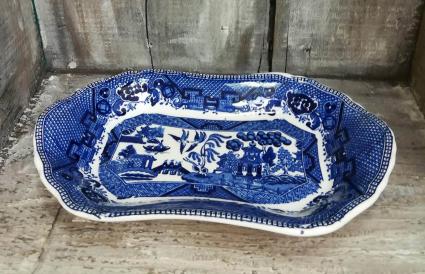 Buffalo produced the first American version of the Blue Willow pattern in 1907. Blue Willow is an ancient Chinese love story in pictures. The legend is that a young girl, betrothed to an older man who had been chosen by her father, was actually in love with a young man. She ran away and married her true love, but the fiancé followed them and killed them. The doves in the pattern represent the souls of the young lovers. Blue and white china has been popular with collectors for decades, and Buffalo's Blue Willow pattern is no exception. 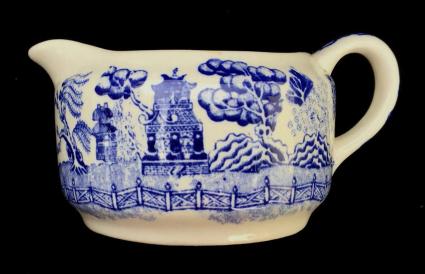 The Blue Bird pattern was made from 1919 to 1922 and has bluebirds in the Art Deco style flying toward the center of the plate. The plate is white with a blue rim.

The Chessie Cat pattern was a white dish with a tabby cat sleeping in a bed, showing just its face and ear. It was made in 1933 for the Chesapeake and Ohio Railroad.

Mandalay was made in 1930. It is an oriental floral motif in pinks, lavender, and blue with sage green leaves. The florals are against a white background.

Statler was a design of tan flowers with blue and green on a lighter tan background. It was released in 1910.

Buffalo Pottery is one of the easiest antique china companies to identify because they almost always have the name, Buffalo Pottery as well as a buffalo and the date stamped on the bottom of the china. Although the look of the maker's mark has changed over the years it is still easily identifiable as Buffalo. In fact, until 1940 the stamp always included the name of the customer for even easier identification. 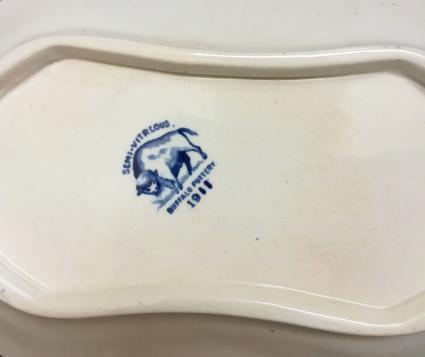 Easy to Find and Collect

You can easily find antique Buffalo China on eBay, online antiques sites, local antique stores, and even garage sales. It was a well made item, and plenty of it exists for the collector today. Buffalo China still exists as part of the Oneida Company and is still making commercial china. This makes it a great choice for people planning to start an affordable china collection.