Antique China head dolls have delighted children and adults alike for years, and the passion for these antiques continues unabated. Whether you purchase high-end, museum-quality examples, or you delight in a doll which survived some dings and chips, collecting china head dolls means entering in a world of history, fashion and fairytales.

What Is a China Head Doll?

China head dolls are those dolls with head, neck, and shoulders (also called shoulder plates) made from china. Sometimes, the lower legs, feet, hands, and arms were also made of china. The china sections had small holes punched in them, and were sewn to doll bodies made of fabric and stuffed with horsehair, straw, sand or other materials. Dolls came in all sizes, from a few inches to nearly 36" or more; the size depended upon the china factory's ability to mold larger body sections. 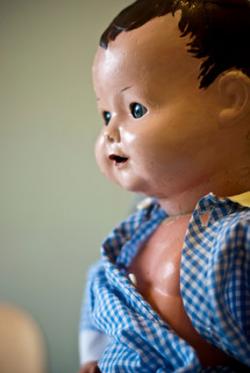 China dolls first began to appear in the 18th century notes the 2001 Childhood Playthings exhibit from the Shriver-Weybright Exhibition Gallery, although they were far less available than the wood, gesso, wax and papier mache dolls of the era. Many "dolls" were, in fact, figures made for creches, the Christmas manger scenes set up in churches and homes. China was imported from the East to Europe, until the secret of porcelain making was revealed, and Germany started to produce fine china in its own factories. By the first part of the 19th centuries, china head dolls were claiming their place in the home.

As china manufacturing methods became more dependable, china head dolls started to fully enter the market by the 1830s according to Collectors Weekly. They had varied looks. In Europe, dolls china factories began to turn out dolls resembling the young Queen Victoria after she took the throne. European and American factories molded dolls with popular hairstyles, pretty faces and delicate hands. Many dolls represented young women and girls, although boy dolls and baby dolls were also manufactured.

Are China and Porcelian Exactly the Same? 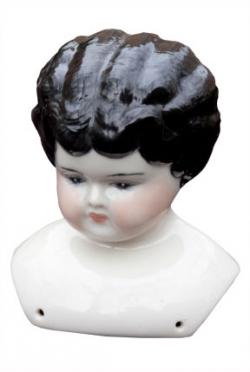 China was first made in the East, where the process was secret, according to Global Times newspaper. It's called "china" because that is where the pottery originated. China is made from a mixture of clay and minerals mixed with water, molded or shaped and then baked at high temperatures.

China provides the base for both porcelian and bisque/parian, as both KnowledgeNuts and the Childhood Playthings exhibit explain; the small differences are what brought about the separate names.

Famous Manufacturers and Their Marks

Unfortunately, many factories did not identify their products, since they were making parts for resale and not complete dolls. Other factories were sold and resold, changing their names and their marks, but still making dolls and doll parts. Some makers placed a doll (or child's) name on the shoulder plate, without noting the factory.

Just a few well-known china head doll manufacturers among the dozens who produced them included:

American companies, along with other German, French and Czech factories also produced dolls, but, as previously mentioned, many of the dolls were unmarked and little is known about the smaller companies. Collectors Weekly notes that from the 1860s until the 1930s or so, millions of china head dolls were made and sold, and are still popular in the antiques marketplace. If you know the maker of a doll, you may be able to find it on Doll Links, which lists china head and other doll manufacturers from the 19th century on.

Dating a china head doll takes research and experience, although there are a couple things that can help clue you in to the date of the doll.

China head dolls had painted faces and molded hair, although Biedermeier dolls, or dolls from an era in German history that overlapped with the English Regency from around 1815-1848, often required a wig. The time period became associated with this style of doll and many dealers use the term to refer to these wigged dolls from the previously mentioned dates.

Hairstyles may give a hint about who the doll may represents, or when she may have been popular, but doll manufacturers might used a head mold for years, even after the hairstyle was out of date.

Hair color can also help date a doll's manufacture. China head dolls were made with black, very dark brown, and blonde hair. Red hair was not very popular: it had the reputation for being an unlucky color, so that may have deterred doll manufacturers from using it.

Dolls were dressed and changed and loved by children, so many times the clothing on a doll is not original. A china head doll with original clothing (or at the very least, clothing from the doll's era) is more valuable than a doll without the correct clothing. Some doll collectors wait years before they locate accurate clothing for their china head doll. Do not remove or destroy any clothing from a china head doll, no matter how poor the condition: clothing can offer many clues to the doll's age.

An excellent publication for identifying (or purchasing) china head doll clothing is Antique Doll Collector Magazine, which lists dealers and resources for research.

Several factors enter into what makes a china head doll rare or valuable.

Taken all together, a china head doll has to have a lot in place for it to command the highest prices. For example, one particularly interesting china doll was Frozen Charlotte, which was a one-piece doll of china -- head, limbs, and body. They could be very tiny (about the size of a modern penny), a few inches tall, or more rarely, 10" or more: the name came from a folk song about a girl who didn't dress warmly enough on a sleigh ride and froze to death.

Rarity is difficult to define, but can mean an object which comes up for sale only only or twice every decade and has collectors willing to pay highly for it. Antique china head doll collectors are avid in their search for the best condition, the most complete clothing, and the most unique doll, driving prices up each year.

China head dolls still show up in antiques shops and at flea markets; keep an eye out for modern reproductions which are thick looking, with little detail. However, there are places where you can purchase fine china head dolls online. Prices may range from $100 and way, way up.

China head dolls have been adored for more than two centuries, and there is no reason to believe that they will ever lose their appeal to collectors. Assembling a collection can be expensive, but the reward is knowing you are helping keep the traditions of playtime and make-believe alive and well.