Antique fishing reels are a popular collectible among fishermen throughout the United States. In essence, each reel has its own set of fish tales to tell. They were cared for and used by men and women who fished for pleasure, for necessity, or simply for sport. There are also those collectors who marvel at the evolution of this simple, yet effective hand-powered machine.

What to Look For in a Reel

If you are collecting reels and want to stick with those that will increase in value over time look for these traits:

Types of antique fishing reels are as varied as the sport of fishing. However, there are a few major classifications that you should know about.

Some characteristics of fly reels:

Casting reels are geared for a rapid line retrieve. American versions are all cousins of the Snyder reel that was developed in the 1800s. Most have about a 60- to 100-yard capacity. Larger versions were often used for trolling or salt-water surf casting. The most famous of these reels, the "Kentucky," is distinguished with click-and-drag buttons on the headplate.

These reels range in size from 150 yards to a large 20/0 Big Game Reel. When collecting, the larger the reel the more valuable it is. Most of these were produced in the United States.

Trolling reels usually look like oversized fly reels. They are still popular with deep-water trollers and you can find many modern versions that are currently manufactured. Some of their characteristics are:

One of the most widely collected reels; the spinning reel has two major classifications--open face and closed face. Unusual styles are starting to bring high prices on the market. Many of them originated in Europe and were imported into the US in the 1950s.

Determining the Value of a Fishing Reel

There are several elements to take under consideration when determining the value of your fishing reel. For example:

Age is not the key determining factor in value, but rather the rarity of the reel or availability of it on the marketplace. The level of quality of the original manufactured product can also play a significant role in the value.

The more qualities listed above that a reel has, the more valuable it is. Hand-made reels, which took great time and care to make are very collectible because it was likely better made than a factory produced reel, and the materials used to make the reel were often much higher quality. Hand-made reels were also produced in smaller quantities, making them scarcer on the marketplace today.

Also keep in mind, that no matter how old or rare a reel is, the condition of the piece is also of paramount importance. It might have all of the hallmarks of a collectible reel, but it needs to be in excellent condition to garner a high price on the market. 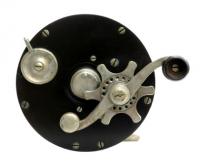 Determining the Age of a Fishing Reel

Many companies have manufactured reels over the last few hundred years. In addition to the big manufacturers, there are also hundreds of small hand-made reel shops that only made a limited quantity of reels. To give you a baseline of some of the bigger names to look for when collecting antique fishing reels, the list below might be helpful.

If you want to learn more about antique and vintage fishing reels check out the following websites. You will find a plethora of information about this wonderful hobby.