Buying and selling vintage Kodak cameras is easier if you understand the models and the factors that affect value. Many of these old cameras are still usable today, and a resurgence of interest in film photography is driving demand for vintage Kodaks in good shape. If you're considering buying one or have an old Kodak from your grandparents, take a moment to learn about it and its value.

Since its beginning in 1887, Kodak has made hundreds of models of cameras. It all started because Kodak founder George Eastman worked to find ways to make photography easier and more accessible to people. Eastman began by inventing a machine to rapidly coat glass plates with photo-sensitive emulsion, but he didn't stop there. The glass plates were heavy and awkward to carry, and Eastman wanted to create something even easier. In 1884, he patented the first commercial roll film. Eastman and the Kodak company went on to introduce a variety of different film sizes and cameras to shoot them. 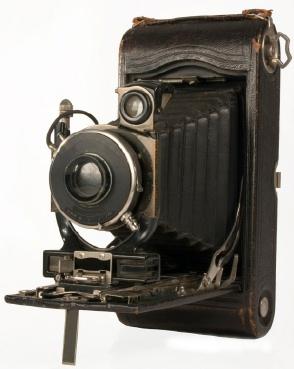 In 1888, Kodak introduced the Kodak #1. Advertised to the public with the slogan, "You press the button, we do the rest," sales of this camera were aimed at amateur photographers of the day. At a cost of $25, the camera was sold loaded with film to take 100 exposures. Once the film was finished, the customer would mail the camera back to the company. For a cost of $10, the camera was reloaded, which needed to be done in a darkroom, and returned to the customer along with the 2 ½-inch prints of the pictures it had taken. Although the price at the time was not inexpensive, the camera became very popular because people did not have to bother with the technical processes and chemicals involved in developing their pictures. These cameras almost never come up for sale on the antiques market, since few of them survive.

Introduced in 1900 the Brownie camera is perhaps the most well known of the Kodak cameras. With a sales price of only one dollar, the first Brownie cameras made photography accessible to the masses. Over the years, the Brownie has been manufactured in both box and folding styles. Box cameras are simply a box, similar to a pinhole camera, but with a lens, while folding Brownies have a clasp that allows the lens portion to fold out from the body on a bellows. Both are easy to find in antique stores and online. Brownie cameras take different film sizes, and some are still usable today. Early models can be very valuable if they are in good condition. 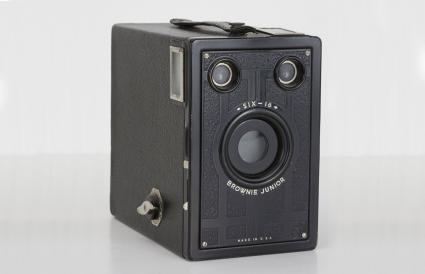 Kodak didn't limit itself to roll film cameras. It also produced large format cameras that used sheet film. One notable model was the Eastman Kodak 2-D, which was made of wood. These came in a variety of sizes, including 5x7, 6.5x8.5, 7x11, and 8x10. You can find these large format Kodak cameras in antique stores and online, and many are valuable.

If you have a vintage Kodak camera or are considering purchasing one, there are several things to consider. Take a few moments to look at the following.

There are hundreds of different vintage Kodak camera models, but it's easy to identify which model you have. Most Kodak cameras have the model number printed right on them. If you can't find identifying information written on the camera, this tool can help. All things being equal, older models are more valuable.

No matter what model you have, it will be more valuable if it is in good condition. This means cosmetic condition, such as leatherette that isn't peeling and metal parts that aren't dirty or rusty. However, it also means functional condition. Although some people like decorating with antiques like cameras, the most valuable Kodak cameras still work as cameras and not just display pieces. These are a few things to check:

Originally, there were dozens of different film sizes, and Kodak made cameras to accommodate them all. However, today, there are only a few sizes of film that are still made. The easiest to find are 35mm, 120, 4x5, 5x7, and 8x10. If a Kodak camera model uses film that still exists today, it may be worth more. Camera Wiki has an extensive list of Kodak models and their associated film sizes. Here are a few you might encounter that use modern film and would be valuable to photographers and collectors:

One of the best ways to find out how much your vintage Kodak is worth is to check recently sold listings. Here are few vintage Kodaks and their sales prices:

Beautiful Examples of the History of Photography

Whether you enjoy collecting cameras, learning about the history of photography, or simply enjoy looking at cameras from the past, vintage Kodak cameras are beautiful examples of the evolution of photographic technology. Many of these cameras are available at antique stores, thrift stores, and online. Knowing what to look for can help you spot a camera that will look gorgeous, function well, and be valuable.