Noritake is a china collector's dream, with thousands of colorful, hand painted patterns and ceramic designs appearing on everything from pin trays to dinner plates, vases to teapots. This may be the perfect choice for anyone seeking an affordable, elegant, and sometimes whimsical, collectible.

In 1876, Japanese businessman Ichizaemon Morimura and his brother Toyo opened the Morimura Brothers shop in New York City to sell Asian antiques and decorative arts in the U.S. and bring American money into Japan through export trade. The shop was successful, but the brothers continued to look for new products for American customers. They knew that china and porcelain were used in every home for dining, washing up, or displaying the family's good taste with decorative pieces, but European factories had production locked up. (Although not technically the same, "china" and "porcelain" are often used interchangeably, and refer to a white, translucent ceramic.)

In 1889, Ichizaemon visited the Paris World Exposition and seeing fine French porcelain, was inspired to create porcelain for the U.S. market by opening a factory in Japan, his home country. The Morimura brothers hired experts to learn porcelain manufacture, and by 1904, they had built a ceramics factory in Noritake, Takaba-village, Aichi, Japan. This allowed the company to control the quality of their goods and designs and ensured that the patterns appealed to U.S. buyers.

The ceramics were hand-painted and gilded by individual artists, and Noritake instituted production line painting and decoration to satisfy future demand. It took nearly 10 years for the company to develop their fine china, but the result continues to enchant collectors today, and the company still thrives.

Noritake china is often referred to as antique, vintage, or collectible, but this terminology can be confusing to a new collector.

Based on the U.S. Customs definition, antiques must be at least 100 years old, so the earliest Noritake pieces are antiques. "Collectible" can be used to mean pieces under 100 years old, and much of Noritake falls under that definition. And finally, since Noritake still produces dinnerware and other items, the products can also be considered new, contemporary, or vintage and retro (roughly 25 years for vintage and under up to 50 years for retro): just remember that these are informal terms with no official definition, and different dealers may use the terms interchangeably.

The following tips will help you determine whether a piece is a Noritake one.

The Noritake Collectors Guild has one of the most extensive listings of backstamps online, including many of the modern marks. Spend some time there and become familiar with how the stamps changed through the decades, which will help you when you purchase Noritake pieces.

Since its founding, the Noritake company has produced millions of pieces of china and porcelain, so collectors can find items for a few dollars or a few thousands of dollars. Local antique shops generally have pieces in stock, but if you want to go beyond your neighborhood, try the following: 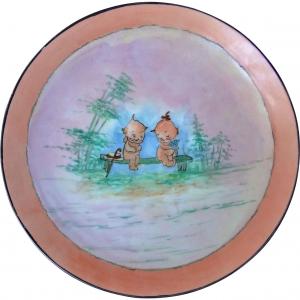 Collectors often learn this the hard way: it can be more difficult to sell than to buy. If a Noritake piece is unusual, rare, in excellent condition and a sought-after pattern, then a sale may be simple to arrange. If you have six "Tree in the Meadow" plates (somewhat common), you may need more time to sell, especially if you require a certain price for them. While you may see your plate listed for $50 at an antique shop, remember that the seller advertises, has a following, and may carry that plate as inventory for months.

Valuing Noritake takes research although online sources like What's It Worth? can help. To sell your Noritake, consider the following resources:

The best way to learn about Noritake is to see it. If you are planning a trip, consider a detour and stop where you can experience Noritake in all its glory, up close. If you can't get away anytime soon, there are also some outstanding online "museums" that let you examine rare and unusual Noritake items.

Noritake is still affordable for a new collector. Pieces can include ashtrays, biscuit jars, dinnerware, novelties, bells, jam jars, spoon holders, and so on. No one is completely certain how many patterns were made by the company, but there are a few major patterns that attract collectors and are instantly identifiable as Noritake.

Noritake has had a complex history, with many backstamps, thousands of designs and unidentified or forgotten patterns rediscovered every year. Keeping up with this information can be overwhelming, but there are a number of excellent online and in-print resources for learning about Noritake china, among them:

Noritake porcelain remains one of the most enjoyable areas for new or advanced collectors. There's always something new to dazzle or intrigue, so take some time to learn about this company and its contributions to the decorative and utilitarian ceramic arts people still enjoy and treasure.