Antique playing cards are a unique art form that has changed through the centuries. Although the hand painted versions beloved by royalty can command thousands of dollars at auction, even mass produced cards are very collectible.

According to Collectors Weekly, playing cards have a long and fascinating history. Although there is indication that cards were used in games as early as the ninth century in China, cards as they are known today are thought to be from the early 1300s. Playing cards immediately fascinated people as an art form and they began to show up in collections by the 1600s.

In the 15th century, woodcut decks were common. A technique for woodcut prints to fabric was tweaked so that it was usable on paper. Starting in the early 1400s, printed decks were manufactured in Europe by professional card makers. The decks were so popular that playing cards were almost as common a use for woodcuts as traditional devotional images. Another technique that was being developed was that of engraving. Engraved cards were more expensive than the woodcuts, and both are very rare today.

Up until the middle of the 19th century, the backs of most playing cards were blank. The front side, where the numbers or figures were, had ornate decorations. In some cases, there were even gilt designs and hand painting. Face cards frequently featured famous people or literary characters, such as Joan of Arc, Shakespeare, and more. 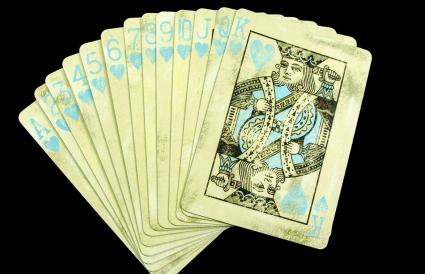 Modern card designs came about in the late 1800s. During this era, the reversed figures and small numbers became popular, since players could hold the cards in a "hand" and see all of them at the same time. Bicycle cards became popular during the 1870s, and many antique decks were made with this design.

In the late 19th and early 20th century, companies began to produce cards for tourists. Some featured pictures or designs from tourist locations, and others. included the logos for railroads, hotels, airlines, and more. The logo cards were often free gifts to entice customers to come back. You can still find these tourist cards in antique stores today. 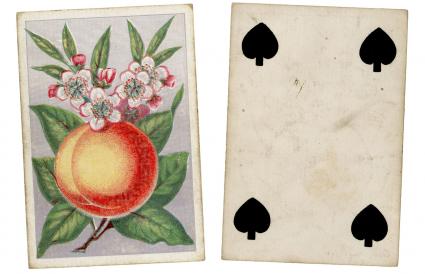 If you're wondering how much a card or deck of cards may be worth, there are several factors to consider. Some of the oldest, rarest examples can fetch hundreds or thousands of dollars, but most cards are worth less than that.

There are several factors that can affect the value of playing cards: 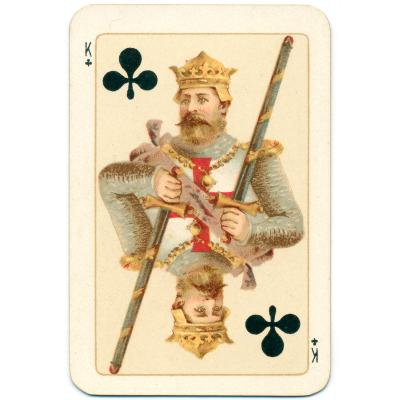 How to Assign Value

If you suspect you have an especially valuable card or deck of cards, it's always a good idea to have it professionally appraised. If you're considering purchasing a card and wonder if the seller is asking a fair price, take some time to look up similar cards that have sold recently on eBay or other sites. Here are some examples:

Celebrate History With Your Collection

Just like collecting trading cards or baseball cards, collecting old playing cards is a rewarding hobby. Some individual cards can be very affordable and make a great option for people who want to start a new collection, while serious collectors can buy and sell more valuable cards. Either way, this is a fun way to celebrate the history of playing cards and social games.