Antique rocking chairs are a beautiful addition to porch or parlor. While Victorian rockers are usually easiest to find, you may also come across older, Colonial rockers especially if you are traveling through New England. With so many styles and eras to choose from you can find the perfect chair for your home.

One style of antique rocking chair was manufactured by the Thonet Brothers Manufacturers in Vienna, Austria during the mid-1800s. They bent soft beech wood to form their furniture. Thonet rockers are valuable and their designs are widely copied, both in antiques and contemporary chairs. 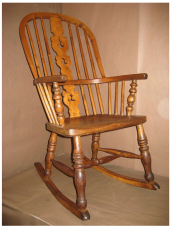 You might come across the term synthetic fibers when looking into antique wicker rocking chairs. Around World War I, machines twisted paper to form these artificial wicker reeds.

It is also important to take notice of the designs woven into wicker rocking chairs. For instance, star-shaped or heart-shaped patterns, as well as figures such as boats, make them more desirable.

Rocking chairs are often associated with the country and the outdoors. For instance, the common location for a rocker is a front porch.

In the 1700s, Windsor chairs were in widespread use in rural parts of England and known as garden chairs. They have spindles running down their backs and armrests, and if they have rockers, their legs are fitted into them. In America the Windsor-style chair became one of the most important chair styles of the eighteenth century. A Windsor rocker was part of many homes through the early 1900s. 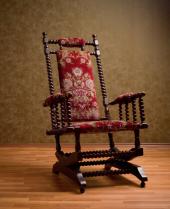 Platform rockers are chairs that have seats that rock while the base remains stationary. These were solved several problems of the regular rocker, including the chair creeping across the floor as it was rocked. It had springs that allowed movement.

Similar to the platform rocker is the glider rocker, patented in 1888. 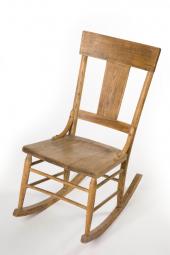 Sewing rockers were small rocking chairs without arms, or with very low arms. Some were upholstered and others were simply wood. These were used by the lady of the house for mending chores as well as nursing babies. The lack of arms gave the occupant more freedom of movement than other rocking chair styles. They were a common part of a complete Victorian bedroom set. 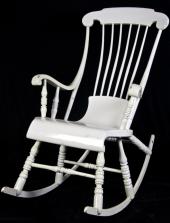 The Gungstol rocker was unusual in that it had three legs on each side. This allowed the occupant to rock vigorously without the worry of tipping over. It was first made in Sweden in the mid 1700s and produced for over two hundred years. These unique chairs are not easy to find, however you can enjoy these images of Gungstol rockers. 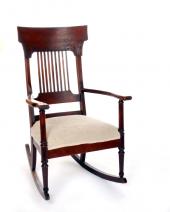 Upholstered rockers were popular in the Victorian era. They were generally considered "parlor" chairs and upholstered in luxurious materials. They may have intricate carvings, or embellishments as well. These are also called Lincoln rockers because President Abraham Lincoln was sitting in one the night he was assassinated at Ford's theater. 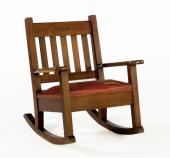 Misson rockers usually had upholstered seats and sturdy backs and arms. They were simple, yet elegant, made without carving or decoration. You will often see a Mission rocker with leather upholstery. This is a very masculine style of chair and is fabulous in an Arts and Crafts style home.

Where to Buy Antique Rockers

Most antique stores and antique auctions will have a few rocking chairs. You may have to be diligent in your search and check often to find what you are looking for. The benefits of finding one locally are that you will save money on shipping as well as being able to physically examine the chair for defects.

If you can't find one locally, all is not lost. The Internet is full of antique rocking chairs in various styles, eras, and price ranges.

You can find anything on eBay, including antqiue rocking chairs. Remember that many sellers on eBay are not experts. You run the risk of buying something that is mis-identified, priced too high, or in poor condition. Always be careful, read the seller's feedback, and ask plenty of questions.

Ruby Lane is an online antique mall that carries numerous items. The variety is similar to eBay but the sellers tend to be antique dealers rather than just people selling something that may or may not be antique. Still, with any online venue, read everything carefully.

Go Antiques is an auction site for antiques and collectibles. It is owned by Worthpoint which gives the auctions a bit more credibility than eBay. Still, let the buyer beware.

Mr. Beasley's Antiques is located in Riverside, California and is used by many of the major motion picture studios for historic sets.

Antique Rockers Are Meant to Be Used

Antique rocking chairs do not normally need to be treated like they were delicate. Like all antique furniture, they should be kept out of direct sunlight and heat sources. Humidity can cause problems as well. Rubbing in lemon oil on a regular basis will help keep the wood moist and the chair in good condition.

Enjoy your antique rocker as so many generations before you have.