Although they are often found at garage sales, flea markets, and estate sales with very low price tags, there are several models of antique Singer sewing machines that are highly sought after by collectors. These beautiful pieces of sewing history are popular with antiques collectors and sewing enthusiasts alike.

Because of the many technological changes Singer introduced over the years, examining the serial number on any Singer will reveal the time period in which the machine was produced. To identify and date your sewing machine, look up the serial number on a chart like the free one in this article.

If you need help downloading this printable, check out these helpful tips. 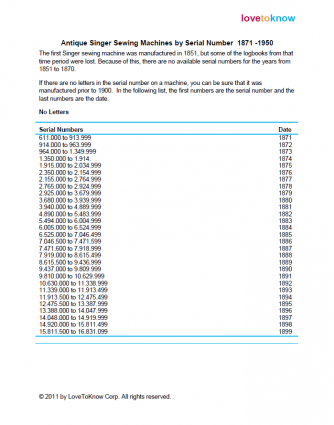 In the early 1850s, Isaac Merritt Singer inventing the first really practical sewing machine of the times. Instead of a circular shuttle movement and a horizontally angled needle, the Singer machine used a straight needle that worked vertically. This made it comparatively easy to use and inexpensive to produce, and "Singer" rapidly became a household name in sewing.

The first Singer sewing machine was patented in 1851. It was the first rigid-arm model and included a table to support the cloth. A vertical presser foot kept the cloth in place during the upstroke of the needle. Most importantly, the machine was the first to have a foot pedal instead of a hand crank. These first machines were designed to be set up on the packing crate that they were shipped in.

The Turtleback was the first machine designed for home use. It had a rocking treadle and a driving wheel.

The Letter A machine improved upon the Turtleback. The foot treadle was wider and easier to use.

The New Family machine was released in 1865. This machine had a lockstitch and an adjustable feed. It was black with a gold scroll design on the machine.

Singer made a modification to the New Family machine with its "Medium" sewing machine, released in 1867. It had more room under the arm, which made it easier for the seamstress to manipulate large amounts of fabric.

The Singer Class 66 model was a treadle machine. Later Class 66 models had a motor and numbered tension dial added. The 66 is easily identified by the "red eye" decals decorating it.

Singer introduced the model 99 electric sewing machine. It was the first portable electric machine and included a bolted on electric light so that the work was easier to see.

The Featherweight, model 221, was introduced at the Chicago World's Fair. This beautiful machine was black with a scrollwork faceplate and gold decals. It included a chrome-rimmed handwheel and a stitch regulator plate. If you can find one in its original case and with the accessories, it will be worth more than just the machine.

In 1939 Singer introduced the 201 and 201K. These are considered by many collectors to be the best machines that Singer ever produced. The machines sewed seams smoothly, with little vibration

The Singer Blackside was manufactured during the years of World War II. It was called Blackside because all of the parts, including the cover over the light bulb, were painted black.

The 301 was the first slant shank and needle machine. It had a vertical, side-loading rotary hook and an aluminum body. While it was similar to the 201, there were some differences as well. The feed dogs drop and it had a marked needle throat plate.

Singer introduced the 206 model. It was the first domestic zigzag sewing machine.

Where to Buy Antique Singers

Because of their popularity and durability, finding antique Singers is relatively easy. If you're looking for a specific model, you may need to do some extra searching. Depending on the model and condition, Singer sewing machine values can vary dramatically from about $50 to upwards of $500.

Some of the best sources for finding a vintage Singer machine include the following:

Many of even the oldest Singer sewing machines are still in use because they were made to last. Unlike machines of today, these old machine were made of heavy duty materials and easily replaced parts. If the instruction manual is missing, you can often get another at the Singer website.

Whether you treasure antique Singer sewing machines because they bring back nostalgic memories of years past, are historically significant, or simply beautify your home, you're not alone. Each one, regardless of its commonness or rarity, held a valued place in a home of yesteryear.