Antique Windsor chairs are a popular style of antique wooden chairs starting in the 18th century.

LoveToKnow recently spoke with antique expert Sandy Summers about antique Windsor chairs. Sandy has been involved in the antiques business in England for 35 years. She is a member of both the BADA (British Antique Dealers' Association) and the LAPADA (Association of Art and Antique Dealers). She has appeared as an expert on the BBC antiques program "Going for a Song."

LTK: How did the Windsor get its name?

SS: The most likely reason is that from early times in the 18th century stick back chairs were being made in the Thames Valley area of England, and the town of Windsor was the distribution point from where they were transported to London and other counties.

LTK: What is a Windsor chair?

SS: It is a chair where the design construction is centered around the seat; the legs are jointed up into the underside of the seat, and the back of the chair and arms are jointed into the top.

Earlier chairs, and other styles of chairs, were constructed as a framework of right angle joints, with the seat dictated by the space created by this framework.

The development of the Windsor chair reflected a growing understanding that chairs with shaped seats and curved backs suited the human body better than the older style chairs. Windsor chairs were an ergonomic design development in their day.

Windsor chairs were first made in the 18th century, but examples made before 1790 are rare.

Windsor chair making increased during the 19th century, particularly with the increasing levels of mechanization which took place during the Victorian era. The majority of good quality Windsor chairs date from 1820 to 1870 while this was still a small cottage industry. 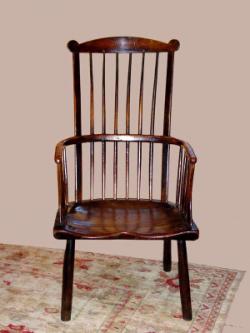 An example of a comb back Windsor chair

LTK: What woods were Windsor chairs traditionally made from?

SS: Most English Windsor chairs are made of either yew wood, or ash and elm, although other woods were also occasionally used.

As yew wood was relatively rare compared to the common ash, yew wood Windsor's were a status symbol. Owning a set was a demonstration of your wealth. The ash and elm Windsors were made for those who could not afford yew wood.

LTK: Are there different styles of Windsors?

SS: There are no standard definitions of different styles, but a broad way of categorizing based on the style of the back is:

Within these broad styles there are distinct variations in design depending on the region of England where the chair was made.LTK: Are there differences in antique European and American Windsors?

SS: Although the basic construction and build are the same, there are some notable differences.

The Americans favored a more utilitarian approach. So the "splat back" style with the decorative central splat was rarely made. The legs were normally connected by a simple "H" stretcher, whereas the English Yew Wood Windsors almost always had a curved crinoline stretcher, a mark of quality craftsmanship.

The angle of joining the legs to the seat is different, with American Windsors having legs pointing out at a steeper angle than English ones.

The timber was different. American Windsors commonly used pine for the seats, hickory for the spindles, and maple for the turned arms and legs.

What to Look For 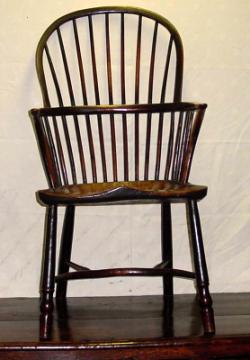 A stick back Windsor chair

LTK: What should a collector look for in an antique Windsor chair?

SS: A collector looking for a quality English Windsor chair would always aspire to one made from yew wood.

The wider availability of 19th century Windsor's makes them a practical option for a collector looking for a set of fine dining chairs.

Sets will always be harlequin, and the main thing to look for is how well matched the set is. The design of central back splat, and the number of spindles either side, the design of turnings to the under-arm supports, and the turnings to the legs should all match. Minor variations are acceptable. And, of course, back height and general size of the chairs should match reasonably well.

Avoid any Windsor chair with coarsely done repairs, bad breaks and metal repairs holding the chair together, or one in need of significant repair, unless you know a restorer used to dealing with yew wood. To get a good restoration job done you really need to use someone who specialises in Windsor chairs, Yew wood and country woods.

Buyers should be wary of buying from antique centers, small antique shops selling a wide range items, or small independent auction houses. Windsor chairs sold from such outlets are frequently mislabelled as this is a specialist area. The woods used in the chair are not always correctly identified, sometimes the circa date is incorrect; sometimes repairs and restorations are not adequately described or even pointed out at all. It is buyer beware. 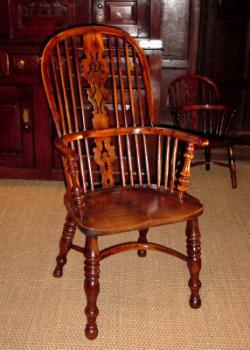 A splat back Windsor chair

LTK: How can you tell the difference between an antique and a reproduction?

SS: The short answer is years of experience.

A few general pointers are:

I knew the dealer who the chair originally belonged to, and the client who later bought it from him in 1999. I had the pleasure of sitting in the chair myself and it was every bit as comfortable to sit in, as it was to touch, and it was the most magnificent handsome chair to stand back and to look at.

LTK: Sandy, one last question. How should you care for antique Windsor chairs?

SS: Polishing with traditional antique furniture wax polish keeps them in good condition by feeding the wood and helping to prevent it drying out.

LoveToKnow would like to extend thanks to Sandy and Adams Antiques for the invaluable information and images that they supplied.