Civil War political cartoons often illustrated the beliefs and thoughts of the time using visual satire to show the vast differences that existed between the people of the North and South. The cartoon below shows Jefferson Davis, the only President of the Confederate States of America in a Union prison. He is complaining about the food to unsympathetic guards. The guards had survived two terrible Confederate prisons, Libby Island and Andersonville.

What is a Political Cartoon?

Political cartoons, also called editorial cartoons, use humor and satire to relay messages relating to the politics and current affairs of the time. Although many political cartoons are humorous, their main purpose is to sway the viewer's opinion to that of the cartoonist. Often viewers do not even realize that the techniques used in an editorial cartoon have the power to change their point of view.

Political Cartoons of the Civil War 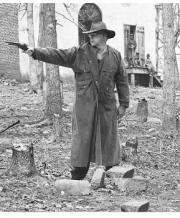 If you enjoy Civil War memorabilia, you love this slideshow on Civil War weapons.

Unlike the images of early photographs, political cartoons of the Civil War years were based more on the viewer's imagination then on the reality depicted in the daguerreotypes, cartes de viste and ambrotypes of the era. The cartoonists' renditions of the military events of the war and the political, racial and social happenings of the times provide a glimpse into the tumultuous years of the Civil War and the strong viewpoints that existed.

From the first shots fired on Fort Sumter on April 12, 1861, to the surrender of the Confederate Army by General Robert E. Lee on April 9, 1865, editorial cartoonists chronicled the war using satirical drawings. Several of the most important topics include:

These cartoons are of great interest to historians, as well as to collectors of Civil War ephemera and those that collect military items from the Civil War, such as Civil War rifles,uniforms or flags.

Political Cartoonists of the Civil War

Although the years leading up to, during, and after the Civil War, were filled with diverse opinions and beliefs, the number of political cartoons representing the North and South was far from equal. Most of the editorial cartoons were published in New York City and stressed strong Northern viewpoints.

New York City, home to booming lithography and newspaper industries, had a high literacy rate and a strong newspaper readership. The popularity of New York's seventeen daily newspapers, including the Times, Tribune and Herald combined with others such as Harper's Weekly and Frank Leslie's Illustrated Newspaper, provided New York political cartoonists' ample venues for their visual satire.

In his book Blue & Gray in Black & White, author Brayton Harris writes of the number of active newspapers in existence on the eve of the Civil War further clarifying the reason for the vast imbalance of political cartoons depicting Southern viewpoints and opinions. According to Mr. Harris there were:

Important political cartoonists of the Civil War include:

Where to Find Civil War Political Cartoons on the Internet

The Internet offers a view into the political satire of the Civil War, which is enlightening, informative and at times disquieting.

Civil War political cartoons offer a look into an important time in the history of the United States that was full of diversity and turmoil.