The Civil War was an important time in American history, and it was also a significant factor in the lives of many quilters. Quilts changed during this era, often based on the available materials, the beliefs of the quilters, and the useful nature of quilts in a time of war. Whether you're a modern quilter hoping to emulate the style of this period or you're simply interested in the history of quilting, it's fun to learn more about the patterns that were popular in the 1860s.

Popular Patterns of the Civil War

The quilters of the Civil War years used some of the same patterns popular in previous decades, but they also had a few designs that typified this point in history.

Appliqued stars and shades of red, white, and blue were popular among Union quilters. One beautiful example from the American Folk Art Museum features 34 stars in the center, representing all of the 34 states that made up America at the time. This meant that the quilter believed in unity for the country.

Perhaps because of the shortages in the South and the need for thrift in the North, many Civil War patterns used small pieces. The quilter of that era could collect these tiny pieces from leftover materials or in some cases, old clothing. One of the most iconic patterns that uses tiny scraps is the Double Nine Patch.

You can see a completed example at Historic American Quilts (scroll to the bottom of the page) or make your own using this free pattern. If you need help downloading the pattern, Adobe tips can help.

For each block, you'll need to cut 45 of piece A and four of piece B. All pieces use a 1/4-inch seam allowance. To construct the quilt, you make five nine-patch blocks out of the smaller squares, using two contrasting colors or prints. Then assemble those five blocks into a larger nine-patch block using piece B. Your finished block will be 12 1/2 inches square, giving you a 12-inch block once it is sewn into the quilt top. 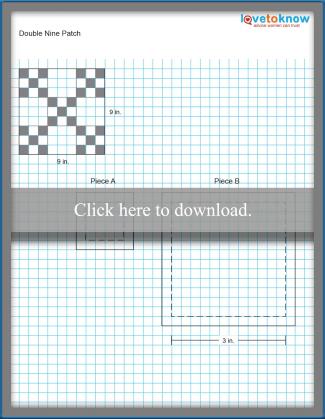 Marriage quilts weren't new to the Civil War, but they continued throughout this era. Young women often worked for years constructing quilts to take with them when they started families. The American Folk Art Museum has a gorgeous example of an appliqued Bird of Paradise quilt top showing popular motifs from the era. The quilt top features a bride but no groom, although the researchers at the museum speculate that there is an empty square where the groom was supposed to be.

Variations on star patterns were popular in both the North and South. You can see a great examples of a star quilts at Civil War Quilts. You can make your own version of this block using this free pattern.

This pattern makes a 12-inch star. You'll need eight of piece A and 16 of piece B in two contrasting colors or patterns. If you wish, you can skip cutting piece B and make half-square triangles with a finished size of three and a half inches on each side. 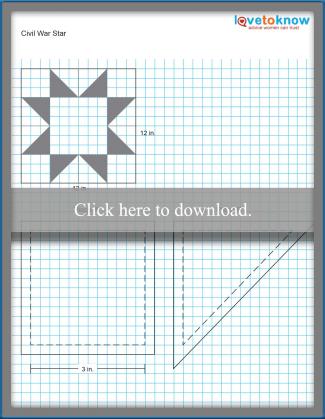 Some quilts featured encouraging messages from the quilters to soldiers in the field. Called album quilts, they offered a way for women at home to provide hope and love to the men who were far away. According to Kirk, these patterns were especially popular in the North.

"These usually had a white cross in the middle," she said. "Many were inscribed in ink with signatures, dates, towns, and messages to the soldiers."

Geometric patterns, featuring triangles and squares, were popular during this era and the years that followed. A particularly lovely example was given to one family as a moving gift just after the Civil War, according to the Fredrick News-Post. You can make this pretty hourglass quilt using this free pattern.

You'll need to cut five of piece A and 16 of piece B in two contrasting colors or patterns. Assemble the hourglass blocks first, and then square them up before assembling the rest of the block. 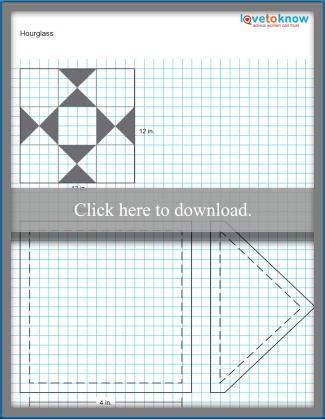 You can also create a quilt to commemorate the Civil War. You can make up your own version or try a pattern book like The Civil War Anniversary Quilts by Rosemary Youngs. It has 150 quilt patterns to signify 150 years since the Civil War. Some blocks are original patterns from the era, and others are new designs that have symbolic meaning.

Kirk mentioned that quilts can also tell the story of the Civil War, particularly from the point of view of slaves.

"There were probably quilts made after the war," she said, "chronicling the journey someone made from South to North."

If you buy a quilt at an antique store or inherit one from a relative or friend, it can be difficult to prove that it actually dates from the time of the Civil War. The pattern itself isn't enough to date a quilt, since many quilters continued to make the same patterns for decades. Kirk said that there are a few clues that can help, however.

One of the easiest ways to authenticate a Civil War quilt is to look for a date on the quilt itself or other proof that it was made during a certain year.

"The only definitive way would be to find a Sanitary Commission stamp on the back, or a date written on the front or sewn into the quilting or embroidered," Kirk said. "Sometimes, if the family letters were saved you might find a reference to a particular quilt which still exists in the family. Otherwise, you make an estimate based on the history of the quilt if known, the fabrics used, and the style."

Kirk said that many Civil War era quilts featured red, white, and green fabrics, popular during the middle of the nineteenth century. However, these fabrics were used primarily for home quilts, not for those quilts sent to soldiers.

"Quilts made for the field tended to be in darker colors with lots of madder browns," Kirk explained.

Having an authentic pattern is an important first step in creating a reproduction Civil War quilt, but there are a couple of other factors to consider. Keep these in mind if you're trying to emulate the style of this era.

You'll need to hand piece and hand quilt your project for the most authentic results. Although the home sewing machine had been invented in the early 1860s, most families did not yet own one of these new tools. Instead, quilters painstakingly pieces each quilt top by hands. Often, many people would work together to do the quilting after the top had been pieced.

Although you may love some of the modern fabrics out there, your quilt will look more authentic if you choose fabrics that could have come from the 1860s. Kirk said that this takes research and thought.

"Select your fabrics carefully," she said. "Most reproduction lines only have one original colorway of each print, so spend some time looking online at good sources. The International Quilt Study Center is a good resource for accurate colors for the period.

Quilters of the North and South

During the 1860s, the quilters of the North and South had very different experiences. This affected the type of patterns they used and if they quilted at all.

According to antique quilt expert and owner of The Kirk Collection, Nancy Kirk, material availability had a major impact on the art. In fact, very few quilts were actually made during this period in the southern states.

"The South was blockaded; very little fabric, thread or needles got through. The fabric that already existed in the southern states went to clothing and bedding," she said. "Very few quilts were made in the South during the war. It would have been considered unpatriotic to cut perfectly good cloth up into little pieces and sew it back together, wasting all that cloth in seam allowances."

In the North, on the other hand, quilting became a way for women to support soldiers from home. Materials were readily available, and the Sanitary Commission requested that women donate quilts to keep their soldiers warm. Kirk said they made thousands of quilts to the specifications required by the Sanitary Commission, although few of these quilts survived the conflict.

"The Sanitary Commission requested quilts that were 56" x 72", basically a small single bed size," she said. "Most men were smaller than today's soldiers."

An Important Part of the Civil War

Quilts served many purposes during the Civil War. From acting as a medium for patriotic statements to serving as a way to keep soldiers warm in the field, these historic textiles had an important place in the conflict between North and South.