Antique and vintage mantel clocks make beautiful display items, whether it's a single clock adorning the mantel or a collection of clocks displayed in a bookcase. An old mantel clock makes a perfect anchor piece in a vintage vignette or stands out as an eclectic accent on a floating shelf in a modern home office. Begin your journey of collecting mantel clocks by getting to know their history.

According to the experts at Merritt's Antiques, the 15th century technological advancement of a wound spring to power a clock provided the basis for bringing timekeeping instruments out of towers and into homes in the sized-down forms of mantel and wall clocks. However, a hundred years would pass before spring powered clocks were put to practical use, rivaling traditional weight driven clocks. 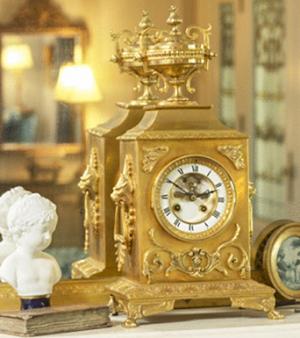 Mantel clocks first came into fashion in France in the mid 1700s, according to Collectors Weekly. Developed from French regency bracket clocks, they adorned the numerous fireplaces of royal palaces and wealthy manor homes. Frequently made from brass, these clocks featured intricate embellishments and detailing and were sometimes accompanied with candleholders or vases. A well-known French maker of mantel clocks in the early 1800s was Raingo Freres.

England was behind by a few years but the first shelf clocks came in the form of lantern clocks and then bracket clocks featuring both brass and wood cases. Bill Harveson, an antique clock dealer, member of the National Association of Watch & Clock Collectors (NAWCC), and author of DiscoverClocks.com, points to three key advancements in clock making during the mid-to-late 1600s that also contributed to the miniaturization and portability of clocks: the pendulum, anchor escapement, and rack and snail striking method. The National Institute of Standards and Technology also points out that the pendulum and anchor escapement helped keep more accurate time in clocks, too.

The style of lantern and bracket clocks remained mostly unchanged through the 1700s, with slight variations in the dials and some had rounded instead of flat tops. Eardley Norton was a skilled English clockmaker producing clocks from 1760 to 1792, and became a member of the Clockmakers' Company in 1770.

With the help of water powered machines in the early 19th century, a small group of inventors revolutionized the clock making business, changing it from an artisan craft to a factory process. Eli Terry and his associates Seth Thomas and Silas Hoadly began to design small clocks with inexpensive wooden moving parts instead of the more costly brass. Encased in a simple wooden box, the glass door contained reverse painted numbers that served as the clock's face. See an example of one of these early mass-produced mantel clocks, known as the Box Clock online at the National Museum of American History.

Mantle clocks dated at 100 years or older qualify as antiques, with the majority of clocks dating from the mid-1800s to the early 1900s, prior to 1930.

Seth Thomas went on to become one of the most successful clock makers in the U.S. Thomas' family run company continued to prosper well into the 20th century, long after his death in 1859. According to Collectors Weekly, some of the most notable Seth Thomas mantel clocks include:

In the mid 1800s, Elias Ingraham created the triangular steeple clock, which inspired similar spin-off styles such as the double steeple and the beehive.

A few other notable collectible clocks made during this era include: 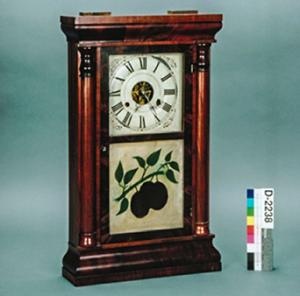 During the 1930s, the Art Deco design movement was in full swing in America and mantle clocks took on a new, streamlined look. The machine-like, geometric aesthetic and smooth, sleek finishes of Art Deco style continued to dominate the look of mantel clocks through the 1940s and 1950s. 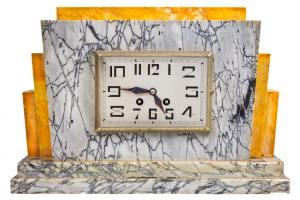 According to Collector's Weekly, France and Switzerland were the leading producers of Art Deco mantel clocks in Europe. French clocks were made from marble, onyx, brass, glass and chrome, with many featuring columns on the sides and Roman numerals on the face.

German clockmakers such as Hermle and Junghans made substantial mantel clocks with beautiful wood veneers and sleek, curvaceous cases.

Plenty of American clock makers were producing Art Deco mantel clocks in the 1930s as well, including Thomas and Ingraham. Joining them in their endeavors were:

Some of the most popular and modern materials for clocks of this era include Bakelite, the first synthetic plastic and Catalin, a similar translucent form of plastic often in a butterscotch color.

Many of the later Art Deco mantel clock designs from the 1940s through the 1960s are a fusion of Art Deco and Midcentury styles, such as the Jefferson Golden Hour Mystery Clock, dating from the 1950s. 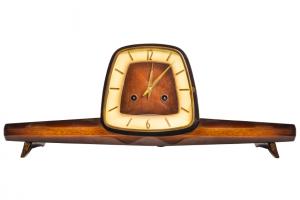 The numerous styles of antique and vintage mantle clocks can make it overwhelming for the beginning collector. Browse through some auction sites and online antique dealers to familiarize yourself with clock maker names and styles of Mantle clocks that appeal to you.

Consider the type of clock that would best complement the style of your home. Art Deco and Midcentury style mantel clocks fit well in modern or contemporary settings, while antique clocks look right at home in traditional settings. You may also want to collect clocks by a certain maker, style or time period. If you need help dating a clock, The Antique Clocks Price Guide has a lot of helpful information.

Factors to Consider Before Buying

Other things to look for or do before buying an antique or vintage mantel clock include:

Although an auction site like eBay offers the largest selection of antique and vintage mantel clocks, consider visiting a local antique shop or thrift store when searching for your first mantel clock. Nothing beats a first-hand experience of getting to examine the piece and actually hear it ticking or chiming before you buy.