A guide for collector marbles gives you the various types of marbles and their values. You can use the guide to help you determine which marbles you wish to collect and how much the ones you have collected are worth.

Handmade collector marbles are found in a wide range of types and designs. All handmade marbles aren't glass since the most ancient marbles were made of clay. A few of the vast types of handmade glass marbles include Swirls, End of Days, Banded Opaques, Clambroths, Indians, Lutzes, Sulphides and Moonies.

There are many types of swirl marbles. Each marble design has specific attributes that defines it and makes it a desirable collectible.

A Core Swirl marble feature inner swirls of color within a base colored marble. The different colored canes are twisted to create the swirls. 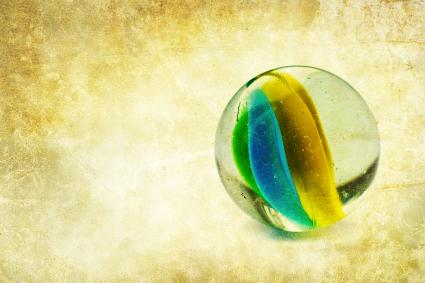 The Solid Core Swirl marble has a clear base, but the spacing of the one-colored or several colored bands/strands of color are closely packed together you can't see any clear spaces within the core.

How to Determine Value of Solid Core Swirls

The Divided Ribbon Core Swirl is formed by three sometimes more separate bands. The bands form a core with clear spaces in between each band. These swirls feature an outer layer of bands/strands.

There are a few things that determine the value of a Divided Ribbon Core Swirl Marble. The better the outer bands duplicate core spaces, the more prized the marble is. Five to six bands are rarer than a three to four banded core. For example, a divided four-ribbon core marble sold for around $26.

Like the name, this marble design features a lattice shaped core. The most common lattice color is white, although rarer Latticinio marbles are orange, yellow and green with other bands/strands. An excellent condition white lattice marble sells for around $10. A yellow lattice sold for around $50. 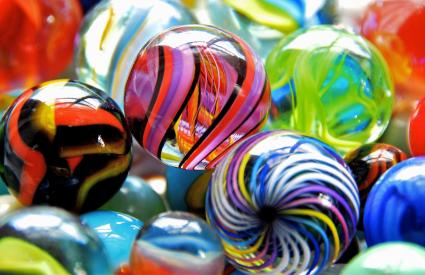 How to Determine Value of Latticinio Core Swirl Marble

One of the rarest Latticinio Core Swirl marbles is a left-hand twist. If you have a Latticinio core swirl marble featuring a red or blue core, then you have the rarest of all designs and a higher valued marble. Rarer specimens feature four and five layers of swirls.

Ribbon Core Swirls marbles feature wide swirls with the core ribbon created by several strands of one color, although some may feature several colors. The center color band is typically flat.

A coreless or banded swirl marble features outer strands/bands of swirls. The core doesn't have any swirls. The marble base is usually clear, green or blue. 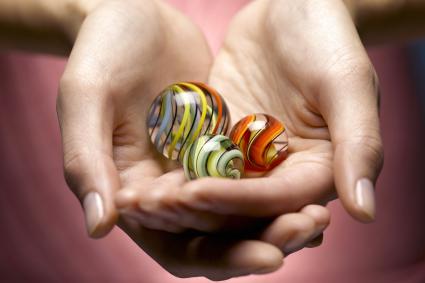 Value of Coreless or Banded Swirls

The swirls are usually different colors and the more colors used for the swirls, the more valuable the marble is. Marbles that feature no spaces between the colors are the most prized as collectibles. A few of these include: 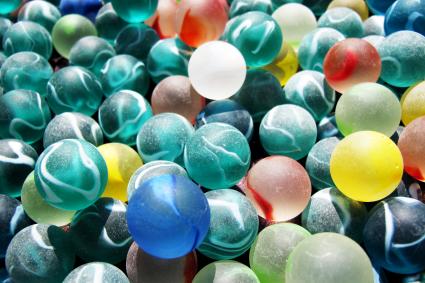 A clambroth is made of hard and soft glass and features an opaque base with swirls of eight to eighteen bands/strands equally spaced. This marble is a very rare find. A Clambroth marble with green stripes sold for around $125.

The Submarine marble is a mix of several styles, such as flecks, panels, and other features. It always has a transparent base glass. If you find a Submarine marble, you'll end up with a very rare marble. A translucent Peltier Green Submarine marble sold for around $30.

A Sulphide marble features a transparent base with a figurine centered inside the marble. The figurine is often an animal, human figurines (bust of full bodied), flowers, and other objects. The figurines were thought to be made of Sulphur, but they are made from clay. A rare Sulphide find contains two figures known as doubles. A Vintage Sulphide Cat marble sold around $75. A rare Sulphide doubles featuring a girl and dog sold for $995.

Other Types of Handmade Glass Marbles

There are other types of handmade glass marbles that don't follow the same design rules as other glass marbles. These include:

Aggies were marbles that made from agate. It became a common name used for almost any type of stone marble. Many times, Aggies were colored with mineral dyes to create a range of green, blue, black, gray and yellow marbles. A Christensen Agate Company marble sold for around $11.

A popular must have, was the steelie. These novelty marbles were ball bearings that were relegated to be used as marbles. A grouping of various sizes of steelies sold for around $10.

What Marbles Are Worth Money?

As with any collectible, the trend for what is considered valuable depends on the rarity and demand of the marble. The marbles that are rare finds certainly will be worth more money.

The history of collector marbles goes back to ancient Rome. The popularity of marbles has withstood the test of time.

Collector marbles have been around in some form since the Roman Empire. Various Roman writers mention marbles throughout their works, and archaeological digs have uncovered early marbles made from clay and then baked in primitive ovens. These marbles often had markings to distinguish them as belonging to one person, and they were used in all types of games. 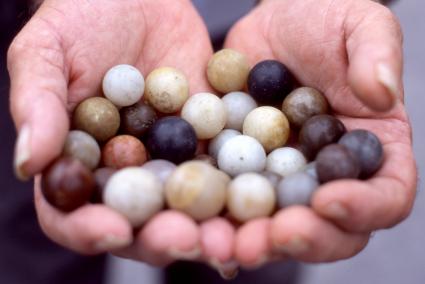 Throughout the next several hundred years, artisans fashioned marbles out of wood, stone and other materials. These marbles had to be cut and molded by hand, which made them more expensive than most people could afford. In 1848, a German glassblower determined a way to make marbles out of glass with a more efficient method. He developed a tool, called a marble scissors, that would allow him to make marbles quickly so that they could be sold to the general public.

The United States became a hot marble market quickly, but that took a downturn when World War I ended German imports. American glassblowers stepped in to find a way to mass produce marbles. They developed machinery to do it, and manufacturers still use these types of machines to drop out marbles quickly.

Collector marbles come in all sizes. Though the standard used in children's play is about one-half inch in diameter, marbles do come in many other sizes as well. Collecting marbles is about finding unique designs and rare availability. Several factors go into making this determination.

Marbles will be worth more money if they are completely rounded. For older marbles, the roundness indicates the amount of time an artisan put into making the toy. More time means a better shape and more value. With newer models, perfectly round marbles have been well kept. Because the marbles are machine made, they start out round but can get chipped over time.

Today's marbles are pretty basic. They are made of agate or glass and come in all colors and designs. There are thousands of marbles of each design produced. Marbles of yesteryear, though, are more unique. Collector marbles that are very rare will fetch a larger amount of money. Many of these marbles can be worth hundreds of dollars, with the rarest ones worth thousands.

Most marbles do not come in packaging, or they have basic netting bags. Others are sold in tins or boxes and having these packages intact and with the marble increases the value of the item.

Deciding Which Collector Marbles You Wish to Collect

Once you begin to delve into the various types of collector marbles, you can decide which marbles you wish to collect. You may wish to start out with a few prized marbles and augment your collection with more common marble designs.