A Brief History of the Sewing Machine

The first patent for a sewing machine was awarded to the British cabinet maker Thomas Saint in 1790. While it is unclear if he ever actually built a working prototype of his machine, which was designed for leather working, a machine built using Mr. Saint's patent drawings did not work.

Between 1800 and 1820, no fewer than five different attempts were made to build a working sewing machine, none of which were successful.

Then, in 1830, a French tailor named Barthelemy Thimonnier invented a machine that used a single thread and a hooked needle to make a chain stitch of the sort used in embroidery. This machine was powered by a treadle and what's more, it worked! Soon he had eighty machines going and a lucrative contract for army uniforms from the French government. His success was short-lived. Fearful of being unemployed because of the new machine, area tailors destroyed Mr. Thimonnier's factory.

1846 saw the first American patent for a sewing machine awarded to Elias Howe. His machine could create a lock stitch with a process that utilized thread from two different sources. Mr. Howe had difficulty marketing his invention and defending his patent. One of those who adopted his mechanism was a man who would make the treadle sewing machine a household item, Isaac Singer.

The history of the "domestic" treadle sewing machine, as well as its foreign counterparts, would not be complete without a discussion of the attempts to improve on this technology. These efforts reached their height between 1880 and 1900 with some very interesting add-ons for the treadle sewing machine.

How to Identify Your Treadle Sewing Machine

You know you have a treadle machine because the foot pedal (or treadle) on the base is what drives the needle. However, it can be a bit more challenging to determine which treadle machine you have. The following process can help. 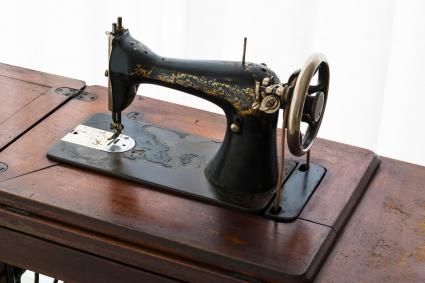 1. Start by Finding the Brand

Most sewing machine manufacturers placed their brand name somewhere on the machine and/or the stand. You can often find it as part of the cast iron base or printed proudly on the machine itself. Common brands include Singer, White, Howe, Willcox & Gibbs, National, and many others. Knowing the brand will help you narrow down the manufacturing date and model number.

2. Look for Model Numbers and Other Identifiers

The machine will likely have numbers printed on it somewhere. In the case of Singer machines, serial numbers are often on the base of the machine itself. White sewing machines frequently include a metal plate with the serial number printed on it. Once you've found any identifying numbers present on your machine, use a resource like the International Sewing Machine Collector's Society to look up the details about the machine. You may be able to determine the date from the information you have.

3. Find Clues About the Date

Treadle machines were made into the 1950s, but they were most common during the late Victorian years. The most reliable method for determining the date of your machine is looking up the serial or model number. However, you can also find some clues in the design. In general, more elaborate, ornate stands and bases signify machines from the late Victorian era. Simpler designs often indicate early 20th century models.

You can also browse through listings on antique and auction sites to find similar machines. If you look at the photos and see your machine is similar, it will offer clues about what you have. Check out eBay and Etsy for partial and complete treadle machines. Even if only part of the machine is present in the listing, it can help you compare models.

One area where collectors need to be wary is with the issue of vintage reproductions that foreign manufacturers are putting the Singer name on. In the United States, they are labeled as vintage reproductions, but they are also being sold in other parts of the world where manual power, that is by treadle or hand-crank, is still necessary. These machines can be expensive and are generally inferior to their antique counterparts. They feature very crude decals, in either the 1930s lightning and eagle motif or the Egyptian Memphis motif, and their black enamel is quite thin. In spite of the good work they put out, these machines are easily distinguished from genuine Singer machines by the poor quality their workmanship.

The treadle sewing machine is one of the most enduring pieces of technology ever devised. Still in use around the world, the treadle's reliable design has made it a favorite since 1830. While you must beware of imitations and reproductions, the real thing is certainly worth finding.