Finding the Manufacturer's Mark on a Rocking Chair

What Type of Mark to Look For

The manufacturer mark on an old rocking chair could be on a label where the information is written in pencil or pen, then the label is pasted to the chair. A branded or stamped maker's mark is also possible. Look for any type of marking that features words, numbers, or a combination of letters and numbers. You could see things like the company name or the year it was made. Finding a year on the mark is the easiest way to tell if the chair is old.

Where to Look for the Mark

The maker's mark on rocking chairs is most often found on the underside of the chair's seat. You could also find the mark on the back of the chair back or on a spindle. If you don't find a mark in these places, inspect the whole chair, but be aware the tag might just be missing.

Identifying the Age of a Rocking Chair Through Materials

Knowing how to tell how old a rocking chair is can help you identify the chair as much as a maker's mark can. Everything from the material and finish to the style can give you clues about a rocking chair's age. 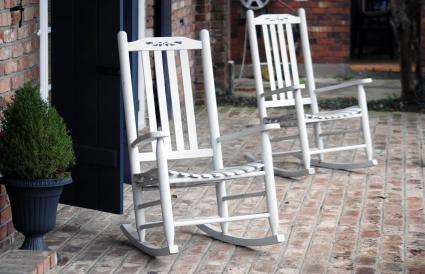 Identify the Type of Wood

Wood is the most commonly used material for old rocking chairs because things like plastic weren't invented yet. While almost any wood could be used today, the type of wood your old chair is made up can be one clue in solving your puzzle. Most antique rocking chairs you find will be traditional English or Colonial American.

Wooden rocking chairs often have a finishing coat to help protect the wood. You can test the finish to find out exactly what it is if you can't tell by looking, but the test required will damage a small spot on the chair so it's not recommended.

Identify How the Chair Was Produced

There is no surefire way to tell if a chair is old just by looking at it, but if you examine the wood and the joints, you might be able to tell if the chair was handmade or machine made. Keep in mind that modern craftsmen can still use old techniques, so you need to look at the chair as a whole to determine its age.

Leather, silk damask, and wool moreen were the main chair upholstery materials used. Upholstered rockers were popular in the Victorian era because it wasn't until this time that fabrics could be mass produced and coil springs were invented. Upholstered rockers are sometimes called Lincoln rockers because President Abraham Lincoln was sitting in one the night he was assassinated at Ford's theater.

The bentwood Thonet rocking chair was introduced in the mid-1800s in Austria by Michael Thonet and the Thonet Brothers Manufacturers. There were many variations on this chair design, but it was always made with steamed beech wood bent into a variety of swirls. Thonet rockers are lightweight and often feature cane seats and backs. In good condition they sell for about $100 to $250 depending on the style. 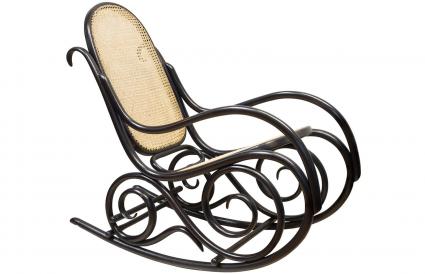 Despite the name, Boston rockers were actually made in Connecticut. Boston rockers were traditionally made of oak and pine, painted black, and embellished with fruit and flower designs. They have a scrolled seat, spindled back, and a rolling headpiece. The Boston rocker was most popular from 1830 to 1890, and Lambert Hitchcock was one of the premier manufacturers. Depending on condition and the exact style, these are worth anywhere from $250 to $750. 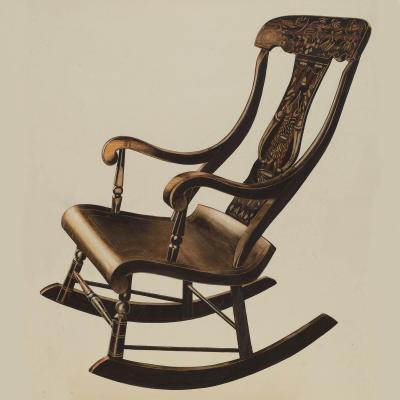 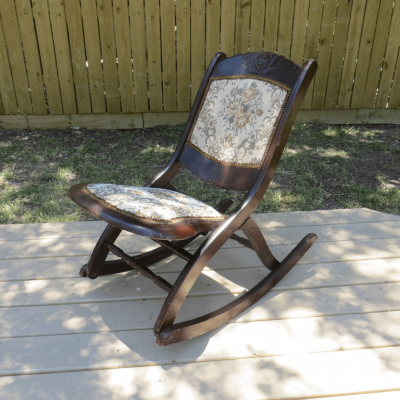 Jenny Lind furniture was named after a popular Swedish opera singer in the late 1850s. More accurately known as spool-turned, the style is easy to identify by the turned spindles on the back, legs, and crossbars. This Jenny Lind style of rocking chair is often used for baby and children's furniture. It's difficult to value these chairs because there aren't a lot of sold listings online, but sellers aren't asking more than $100, so you can assume these aren't very valuable. 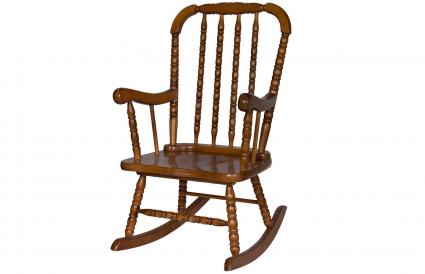 The classic ladderback rocker is what many people think of when they think of a country rocking chair. It is easy to recognize with its tall back and horizontal slat design. Values vary based on style, age, and condition. 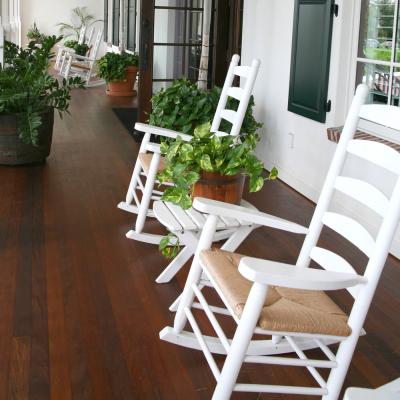 Misson rockers usually had upholstered seats and sturdy backs and arms. The mission style is simple, squared off, and squat. They were simple, yet elegant, made without carving or decoration. You will often see a Mission rocker with leather upholstery. This is a very masculine style of chair and is fabulous in an Arts and Crafts style home. A Charles Stickley mission style rocking chair sold on eBay in 2020 for about $700. 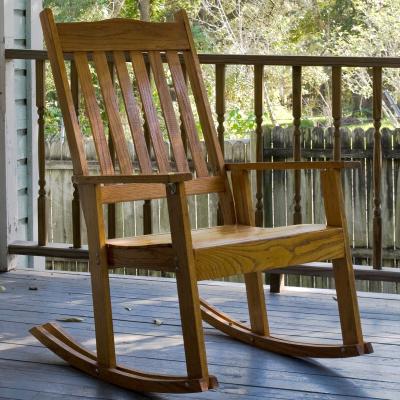 Platform rockers are chairs that have seats that rock while the base remains stationary. These solved several problems of the regular rocker, including the chair creeping across the floor as it was rocked. It had springs that allowed movement. Similar to the platform rocker is the glider rocker, patented in 1888. Platform rockers like a Dexter chair are only worth about $125 to $275. 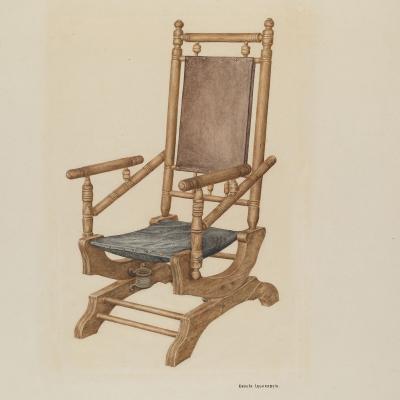 The pressed back rocking chair was part of the colonial revival style that lasted from about 1870-1920. You can easily identify this style by the raised design of the wood on the back. Beware of reproductions, this style became popular again in the 1980s. An early 1900s colonial American pressed back chair sold on eBay in 2020 for $400. 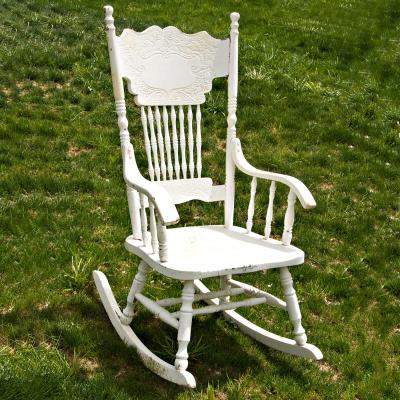 This small chair is a ladies sewing rocker, sometimes called a nursing rocker or slipper rocking chair. The chair is always bigger than child-size but smaller than a full size rocker would be. The lack of arms allowed the lady of the house to easily nurse an infant or sew a shirt while she rocked. These are utilitarian chairs, usually simple and made from pine. A sewing rocker in good condition from the late 1800s sold in 2020 for $125. 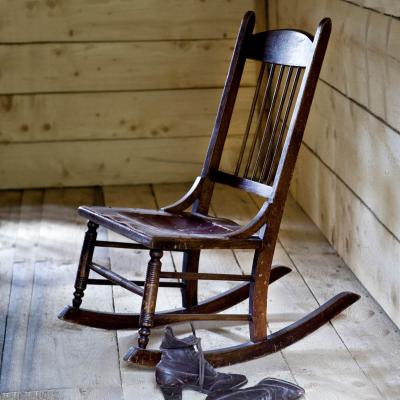 You might come across the term synthetic fibers when looking into antique wicker rocking chairs. Wicker has been used since Roman times to create furniture and was popular as early as the middle of the 1700s in the United States. Victorians perfected the design and loved wicker because it allowed them to have all their scroll work and details their hearts desired. It is also important to take notice of the designs woven into wicker rocking chairs. For instance, star-shaped or heart-shaped patterns, as well as figures such as boats, make them more desirable. Wicker rocking chairs from the early 1900s can be worth about $350. 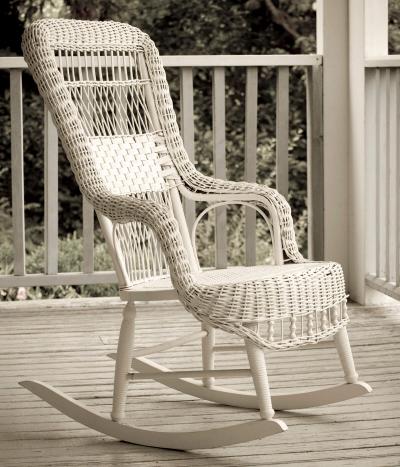 From the early 1700s to early 1800s, Windsor chairs were in widespread use in rural parts of England and known as garden chairs. They were introduced to America in the 1720s. Originally, they were made by attaching rockers to a standard Windsor chair. Windsor rocking chairs have spindles running down their backs and armrests, and if they have rockers, their legs are fitted into them. The Windsor style was used by many manufacturers, so values vary. 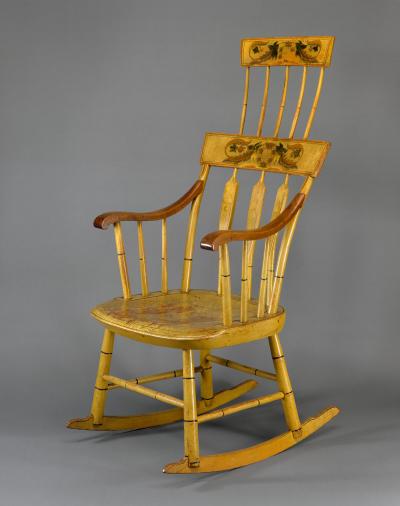 Get a Professional Opinion

As with most antiques, your best option for identifying and finding the value of your antique rocking chair is to consult an expert. Antique furniture appraisals by chair experts and rocking chair experts or experts on the style of furniture you have are ideal. Local auction houses and antique stores are great places to find an appraiser, but you can also get free antiques appraisals online through expert websites and marketplaces.

Beyond the Rocking Chair

Rocking chairs are more than furniture, they've been a way of life, especially for Americans, for decades. Because old rocking chair identification can be very difficult, it's best to consult an antique furniture expert. They'll know which details and features were used at different times throughout history and use that information to help identify the piece.