Morton pottery was once one of the most popular manufacturers of pottery in the United States, and it was sold in nearly every city and town. It's also among the most affordable antique collectibles, and pieces are widely available for collectors.

The term "Morton pottery" refers to the work of several companies that were all located in Morton, Illinois. Morton pottery was produced in the late 1800s through the late 1970s. These companies included:

Morton Pottery and the Rapp Brothers

The original Morton pottery company, the Rapp Brothers Brick and Tile Company, was started in 1877 as the brainchild of six German brothers from the Rapp family. In the beginning, they focused primarily on producing utilitarian bricks and tiles, as the name suggests. One of the original Rapp brothers and his sons started Cliftwood Art Potteries in 1920 and became the first company to produce mostly decorative items, which the name "Morton pottery" became known for. In fact, today usually only serious collectors even know that Morton Potteries began to produce materials just for the building trade.

Cliftwood Art Potteries' decorative pottery was produced with high end artistic values, rather like its contemporary Roseville Pottery. Matthew Rapp was particularly talented at creating drip glazes, particularly chocolate brown, cobalt blue, and jade colored. Some pieces even used very thin gold or platinum decoration. Because the metal was so thin, it could be rubbed off easily, and so it's very rare to find these pieces in good condition. The company produced hundreds of thousands of various novelty figurines, Morton Pottery vegetable shaped planters, and "wall pockets," pieces that were mounted on walls and could hold flowers or grasses, selling them door to door as well as through five and dime shops throughout the nation. It eventually closed in 1944 after the business was destroyed in a devastating fire. 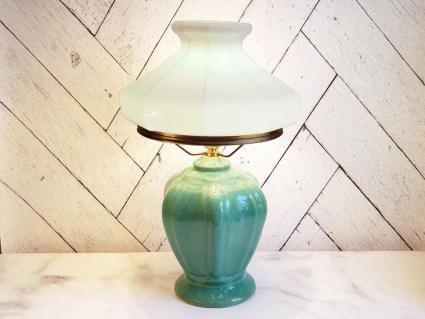 The sons of Matthew Rapp formed American Art Potteries in 1947. However, they were plagued by a series of financial and management troubles, including fires, competition from cheaper overseas production, IRS seizures, and bankruptcies, that started in the 1950s. Their molds and manufacturing equipment were purchased by the Morton Pottery Company, which was run by another set of sons of the original Rapp brothers.

The Morton Pottery Company produced a number of different types of pottery during the following decades. They were known for making beer steins, lamp bases, decorative art pieces, and political memorabilia items until about 1969 when the company was sold to another set of Rapps. Unfortunately the company eventually faced bankruptcy and stopped making pottery items in favor of more utilitarian pieces for sale such as insert for crock pots until they finally closed in 1976.

As mentioned above, Cliftwood's drip glazes one of the most recognizable features of Morton pottery. Color is another identifying factor, and some of the most common were blue, green, yellow, and white. Morton pottery can be difficult to identify because it was made by so many companies and many did not leave pottery marks. There are collectible guides you can purchase to help you with learning more about the different lines, such as Morton Potteries: 99 Years - A Product Guide by Doris Hall, which can be found used from various booksellers. You can also look for a "Morton USA" stamp on the bottom or in some cases stickers, though it's rare to find pieces where they have not been removed. Another identifying feature of Morton pottery, at least with their animal figurines and planters, is the heavy, thick walls and finished insides with unglazed bottoms.

Morton pottery had several themed lines made by the different companies that can help with identifying whether it's a true piece of Morton pottery. Figurines and animal planters, especially birds, were the most commonly produced, but it also produced items in smaller batches, most of which are quite rare.

Many of the pieces made by Cliftwood have a more "high-end" appeal and were lovely decorative pieces for the home. These include flower vases and bowls and decorative bases for lamps. Some common decorative themes featured were birds, flowers, and Japanese cultural themes like pagodas. Some lamps featured animals in dramatic poses such as panthers and buffalo. 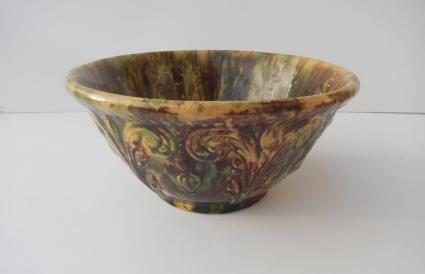 Most of the animal figures today stand out as kitsch. The various animals have exaggerated features and impossibly sweet expressions. One of the more iconic themes are the Morton lovebirds. While more realistic, the lovebirds are cuddled together sentimentally and painted in rather translucent pastel colors. There are also a series of flowerpots and planters with animal shapes such as pigs, lovebirds, parrots, turkeys, ducks, bears, kangaroos, cats, and bulldogs. 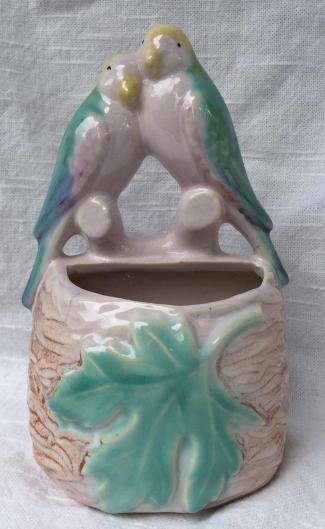 Some rarer Morton pottery pieces are the antique vegetable shaped planters, of which there are 18 designs featuring fruits and vegetables. An example is the Mother Earth Fruit and Vegetable planters, which are shaped like yams or sweet potatoes.

Because the Morton Potteries has such a strong association with the Illinois heartland, some prominent politicians used them as campaign memorabilia. FDR ordered miniature beer steins to remind potential voters that he promised to end Prohibition. The Republican State Senator and presidential candidate Everett McKinley Dirksen commissioned pottery elephants and ashtrays with elephants. John F. Kennedy, whose brother, Joe Jr., trained during WWII with Gilbert Rapp, a descendant of the founders, commissioned donkey figurines.

You can find several other smaller lines of Morton pottery that were made in smaller batches. For example, Davy Crockett figures were made to capitalize on the popularity of the television show. Baby shoes in blue or pink and formed as planters were also popular decor for children's nurseries. Decorative figurines for nurseries were also produced, such as teddy bears in pink or blue. A miscellaneous theme that predated the Chia Head was the Paddy O'Hair pieces, which were planters shaped like a bald man's head.

Morton pieces are generally easy to find online on websites like eBay and Etsy. You can also often find Morton earthenware in antique stores. Prices are usually affordable and are based on rarity and condition. The fine art pottery usually costs about $30 to $60, while the novelty decorative items usually sell for between $10 and $30. If you're looking for an easy way to begin collecting pottery, Morton pottery is a great choice because there are many pieces available and won't break your budget.