The market for rare vinyl records exists for many reasons. The sound quality of the phonograph record may be better than the CD, or no compact disc may have been issued. Perhaps the record was pressed on colored vinyl or is a promotional copy only sent to radio stations. Maybe the record is scarce because not many people held on to it when it first came out.

Since 1986 Jerry Osborne has been writing a weekly syndicated Mr. Music newspaper column about records and music history.

- The Complete Library of American Phonograph Recordings comes out annually and describes every record released during that year.

- Rockin' Records by Jerry Osborne prices over one million records.

In addition to his monthly auction, John Tefteller owns an immense collection of rare records that he exhibits at his online record museum. Here you can see the only known copy of Gary US Bonds' Dear Lady Twist from Legend records on yellow and green swirl vinyl, or the rare original Terraplane Blues by Robert Johnson from Vocalion.

According to his website, John Manship is an authority on soul records and has been dealing rare vinyls since 1969. He also sells several price guides. This U.K. dealer might have a different stock than U.S. dealers. 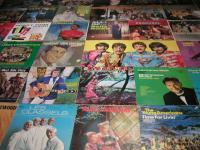 A characteristic of vinyl records is the large sleeve for artwork. The Beatles' Sgt. Pepper's Lonely Hearts Club Band and Abbey Road albums are as famous for their covers as for their music, while Yesterday and Today with the original baby butcher cover is an extremely expensive rare vinyl record. Additionally, many albums came with extras such as postcards and posters that don't fit into the CD's small jewel case.

Album covers can be searched by musician, title or keyword. There is also a forum, chat room and links to other websites about album artwork.

Goldmine Magazine has been an authority on collectible records and music memorabilia since it was established in the 1970s. They also have a significant online presence.