It isn't difficult to understand how the red dragonfly cast iron teapot came to be. Throughout ancient Asian culture, the dragonfly represents beauty, happiness, freedom and even harmony. The dragonfly as artwork on most items is a symbol of both harmony and good luck. Even Native Americans considered the dragon fly as representative of success. Additionally, the color read has meaning throughout Asia as symbolic of success and luck as well. Together, a red dragonfly cast iron teapot is a perfect gift to wish a loved one future success and luck.

Throughout various Asian cultures, cast iron teapots were more than just something used to pour tea. Tea drinking is a spiritual, ceremonial practice in most Asian countries, so the container that holds the tea has a very special place and purpose within those ceremonies.

The Importance of the Dragonfly

Cast iron teapots are central to those tea drinking rituals. In Japan, the tea ceremony is called "chanoyu." In China, there are similar ceremonies, but they are all centered upon the concept of Tao, the Yin and Yang forces that, in balance, bring harmony and peace to one's life. The Japanese ritual, in particular, paid extreme attention to every detail of the tea drinking ceremony, including the aesthetics of the setting, the colors and images on containers and utensils, and the atmosphere in the room itself. Taking this into consideration, and the meaning of the color red and the symbol of the dragonfly, it is easy to see why so many people have such reverence for the red dragonfly teapots.

Because these old cast iron teapots were used throughout Asia for centuries, teapots made of this heavy metal are easy to find. However, discovering the very special red cast iron teapots with the beautiful dragonfly mold on the side is like finding a treasure. Used in Japan many centuries ago, Japanese cast iron tea pots, called tetsubins, are sought after by collectors across the world. Manufacturers of contemporary teapots even use some of the same casts that were created many centuries ago. 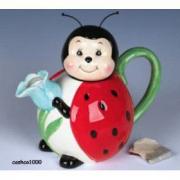 Japanese tetsubin tea pots are rare items to find in American auctions, except at an auction for Asian artifact collectors. At these auctions you'll likely have to compete with very wealthy collectors or museums. Many of the older cast iron teapots are a prized item as part of larger private antique and art collections, as well as in many museums around the country.If you love the artistic and historic value of these beautiful cast iron teapots, there are many companies that manufacture replicas of the ancient pots. Most of these companies utilize the same casts that were used to create their antique counterparts. Other companies online, usually Japanese antique dealers, offer authentic antique tetsubin teapots. The following companies offer the red cast iron teapots with the butterfly mold on the side.

Whether or not you are a collector of Asian antiques, the history and beauty of these stunning works of art jump out at you whenever you're in the presence of them. They are very difficult to miss when browsing the wares at any high-end antique sale, and if you are ever lucky enough to obtain one, you can be proud of owning one of the most culturally significant and beautiful antique items that you'll find anywhere.For additional information about antique teapots, read the following LoveToKnow articles: