Whether you are a serious collector of Doulton figurines or want a couple of cute Toby Jugs to decorate a shelf, having an up to date Royal Doulton price guide helps you to make an informed buying decision based on the current market price.

From its early beginning in 1815, the London-based Doulton Company grew to become one of the most well known pottery companies in the world. For almost 200 years, Doulton products have been considered to be among the finest in quality and craftsmanship.

Since its inception, the company started by John Doulton, did business using the following names:

The beautiful ceramic pieces being produced by Doulton & Company in the late 1800s were noticed by the British Royal family including Queen Victoria. The Queen liked the pieces so much that in 1887 she knighted Henry Doulton for his contributions to England's ceramic art.Fourteen years later, King Edward the VII issued a Royal Warrant to the Doulton factory. By bestowing this royal honor upon the company, King Edward was also giving them the right to be called Royal Doulton.

Today Royal Doulton is part of the Waterford Wedgwood Group, operating as part of Doulton Home. There are three brands that make up Doulton Home:

The Importance of Royal Doulton Identification and Price Guides

For almost two centuries Doulton has produced a wide array of different products, often causing confusion among collectors. The company has used numerous backstamps, marks and logos over the years. Many figurines have the artist's initials stamped on the bottom. Other figurines are signed by the artist. However, there are also a large number that do not have any artist identification at all, only a backstamp. The antique and collectible world of Royal Doulton is often complex and confusing. Many seasoned collectors consider their identification and price guide an invaluable reference and refer to it often. 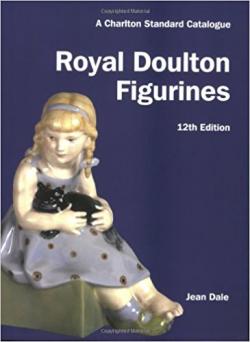 The following price guides for Royal Doulton antiques and collectibles are from The Carlton Press. Each Charlton Standard Catalogue is available from Amazon.

A Royal Doulton price guide that is up to date is an essential tool for anyone that collects, buys or sells these exquisite antique or collectible treasures.