While most people are familiar with the Salem witch trials, few know that the Salem witch memorabilia associated with the trials are a source of the American souvenir industry. These antique collectibles are among the first available from the United States. Although the trials put a damper on Massachusetts at a horrific time, there was one jeweler in the area who seized on the opportunity to make money from the ordeal.

Beginning in 1692, the people of Salem Village succumbed to the idea that witches existed and could infect the community. The episode, which started with a group of teen girls, led to the inquisition and execution of dozens of people over a 13-month period. Historians differ on why the witch trials started or what was happening. Some people believe that the girls' jobs in a hemp factory led to the delusions while others contend that the girls used the trials for attention. The end of the witch trials left families devastated and a community forever tarnished. People in the town of Salem today are quick to point out that the witch trials actually took place in present-day Danvers, though the town was at the time called Salem Village.

It would seem odd that a souvenir market would creep up from such a tragic event, but Daniel Low decided that the town could benefit from the types of souvenir pieces he had seen during trips to Europe. Mr. Low set about making a spoon with a witch design, and its popularity soon encouraged him to create another design. These spoons began selling wildly, and Salem's symbol quickly became a witch. She was plastered on everything in the town and remains a popular symbol even today.

The souvenir craze had hit Europe already, and Low was responding to what he saw as a cottage industry in England and other nations he visited. Symbolic jewelry and silver had long been a Celtic tradition, including the use of witches, but Low was the first to bring this custom to the United States. Low's first spoons were fairly simple, but the designs became more ornate. The witch who was the symbol of Salem in the early days of the craze looked like a mean witch, but over time, as the souvenirs became popular, the witch became friendly to meet the needs of more people. As Salem's popularity soared, people in other towns began to adopt symbols to build their souvenir industry. 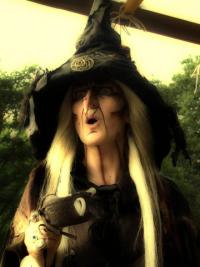 The memorabilia that came from the Salem trials does not just stop with spoons. The following additional pieces are today considered the prime collectibles of American Halloween celebrations. Some of the best pieces you should seek out for your Salem collection are below. These collectibles in good condition from the witch trials era will fetch a good deal of money.

Many of these items will sell today at auctions for $40 at a minimum. Some, like the spoons, will go up to $150 or more if they are in good shape. A good collectible price guide should give a sense of how valuable a Salem item is today.

Pamela Apkarian-Russell is a collector of Salem and other Halloween artifacts, and she aims to open a museum in Salem. The official theme of the museum would be Halloween, but as Apkarian-Russell has more than 15,000 items for inclusion, many of them are specific to the town of Salem. Apkarian-Russell has postcards, candy, costumes, toys, and more all related to Halloween and Salem. In addition, Salem boasts a couple of bed and breakfast inns that encourage visitors to stay in this historic village to learn more about its past.