Chinese art spans thousands of years and like the country and its people, is by turns colorful, traditional, sophisticated and innovative. Whether the artist produced screen paintings or porcelain, the aesthetic and symbolism of the art was as important as the form or figure. The beauty, grace, and sometimes fragility of Chinese art belies its power, which has intrigued viewers and collectors through the ages.

China's long and complex history is divided into many eras based upon the ruling cultures, and each era played its own role in the development of art and design. Although the periods are defined by rulers and dates, art is bound only by the need for it, so certain styles overlapped and others disappeared in a generation.

As far back as 10,000 BCE, Chinese art had an important place in the Neolithic culture when funeral customs became codified and burials included grave goods. The Yangshao culture of northwest China began to develop agriculture as a way of life and was also known for its crafts, including pottery, textiles and metallurgy.

Clay pots, including funerary urns, were coiled, and slip-decorated with geometric designs. The Hongshan culture shaped jade into decorative and ceremonial items such as swords, reaping knives and plaques. Painted designs were made with brushes, beginning an artistic tradition that continued into modern times. Bronze statues and vessels were cast for religious purposes, although wine vessels in the shape of animals are known. 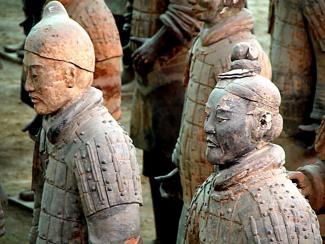 The Qin era (221 BC - 206 BC) included the building of the Great Wall of China, and an emphasis on structure and rules, which resulted in the destruction of many books written by earlier scholars. This dynasty was concerned with warfare and defense, leaving little time or money for art.

This is illustrated by perhaps the most famous art of the Qin Emperors period, the Terracotta Army of Qin Shi Huang, 210 BCE. The army, consisting of more than 8,000 life-size soldiers, horses and archers, were made of terracotta, baked and unglazed clay. The statues were buried in order to accompany and serve the Emperor in the next world. Each statue's face is different from the rest, although who the subjects were remains a mystery. 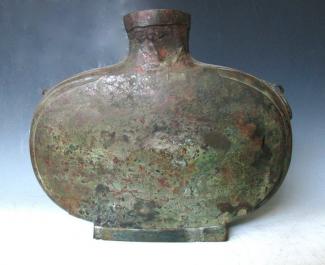 The Han Dynasty (206 BC - 220 AD) contributed much to Chinese art, and the world. Paper now replaced silks as a writing surface. The trading route known as the Silk Road was now in use, spreading Chinese culture across Asia. It was during this dynasty that porcelain began to gain favor.

As if the Han Dynasty did not contribute enough to Chinese art, it was the era when painted clay tiles depicted landscapes and deities, which later became one of the most important subjects in Chinese art.

Buddhism and the Tang Dynasty

During the centuries 220 - 581 AD China was divided into regional dynasties, and Buddhism was introduced from India. Buddhist beliefs in enlightenment and in the practicality of gaining knowledge entered Chinese art through naturalistic, rather than abstract, designs. 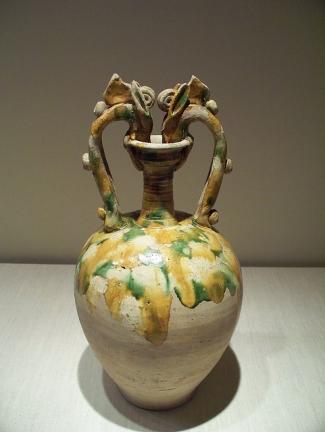 The Tang Dynasty (618-907 AD) was among the great ages of Chinese art and society. During this period, calligraphy became a prized Chinese art. Both men and women practiced it, and each developed a style and method all their own. Silk had given way to paper, and more artists had access to the materials. The art of calligraphy was rooted in the belief that the characters were a balance of "bone" and "flesh", or thickness and thinness, and that the pressure of the brush, the depth of the ink and the movement of the calligrapher's hand created a world which could be read in an ink mark.

The golden age of painting began during this period. Paintings (on scrolls and silk) by artists such as Han Gan and Wu Daozi began the Chinese devotion to figures and landscapes as painting subjects. Artists depicted the landscapes of their world, from the great mountain peaks to gardens and flowers.

Great artists were recognized by the Emperor's court, and their work was sought after by the wealthy and powerful. When the Tang Dynasty began to weaken in power, artists emphasized the natural world as a place of retreat, where man could flee from the political chaos around him. 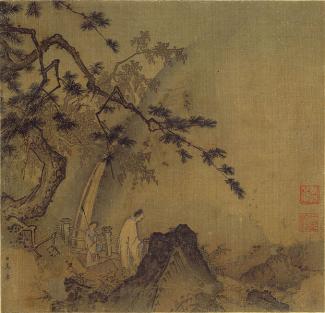 Scholar by a waterfall Ma Yuan

The Song dynasty (960 - 1279 AD) was known for the beginning of a new social class, the scholar elites, men who created an aesthetic sense which defined Chinese life and society. This was the dynasty which introduced government testing to select the officials best suited to a job; before this, bureaucrats often inherited a position or were appointed after military service. The Song scholars were learned, but also skilled in one of the arts, whether it was calligraphy, painting or poetry. When these men left office, they pursued the arts, and contributed to the glory of the dynasty. Neoconfucianism was the eminent belief system, 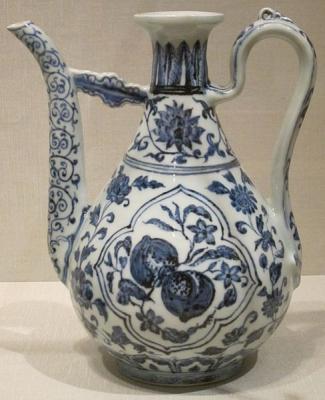 During the Ming dynasty (1368-1644 AD), the Mongols were defeated and Chinese emperors returned to the throne. The great Forbidden City was built, and art came under the direction of the government. Painters were encouraged to return to the older, natural styles, in a nostalgia for ancient times. 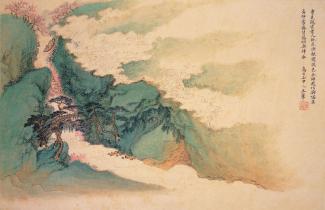 The Qing dynasty (1644 - 1911 AD) was that of the Manchu, who were not indigenous Chinese and who ruled firmly through a strong military. Despite their desire to remain apart from the Chinese, the Manchu were excellent leaders; taxes were low, people were relatively safe and Chinese art thrived. During the dynasty, three types of artists developed:

This was the dynasty most active in trade with Europe and the American market, a time when ceramics were lushly decorated with bright colors more appealing to this "new" world. Designs covered nearly every inch of the pottery, resulting in a swirling, sometime jangling, surface far distant from the elegant and pure porcelain of earlier times. Portraiture became an important style, with artists organized into workshops, where individuals completed different sections of a painting. 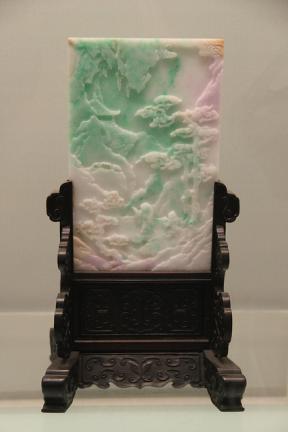 The Qing Dynasty was also known for changing the art of jade carving. The stone was a favorite artist's medium since Neolithic times, used for everything from jewelry to burial suits and decorative items.

The twentieth century saw China undergo many changes - political, social and religious - and during Mao's Revolution, the glory of old China was disdained and forgotten.

Today, modern China continues to produce art, from paintings to porcelain, but many of the traditions and skills came close to extinction, leaving only the original paintings, pottery and sculptures by which to recall the beauty and philosophy of the ancients.

There are many excellent online "museums," which offer a viewer the chance to see art from all of China's dynasties. Among them:

What and Where to Collect

Chinese art was collected first by the Chinese themselves, later by cultures along the Silk Road, and eventually by Europe, and the Americas. Chinese art inspired periods of "chinoiserie" in Europe, when pottery and paintings drew from Chinese styles. The Europeans did not discover how to make porcelain until the mid-18th century, because the Chinese fiercely guarded their methods.

While prices today for the finest ancient antiques can be out of range for most budgets, the following items can sell for well under a thousand dollars, and are worth watching for at auctions and sales:

As with any art, collecting can be tricky and with Chinese art, doubly so because of the fine reproductions and fakes which have appeared for centuries (especially jade snuff bottles). The best way to collect antique Chinese art is to work with a knowledgeable dealer online or in person. Here are some galleries and dealers who have extensive knowledge in the field, and who offer items from $100 to millions of dollars.

As the Chinese economy has boomed, ancient Chinese art prices have skyrocketed as well. Whether you want to spend thousands of dollars or only a few hundred, there are items available. The best way to begin is to do your homework and learn about what you want to collect, then start with small collectibles and always buy the best you can afford. Chinese art is priceless, no matter what you pay for it.