Today's journeys can be fraught with cramped seats, overhead storage and lost bags, but once upon a time, travel could be a bit more stylish and the luggage, a bit more tolerant of being tossed and trammeled. The history of vintage bags and trunks reveals a world far different than that found on today's jumbo jets.

The story of luggage goes back a thousand years or more. Early travelers carried as little as possible, unless they were fortunate enough to have a wagon or cart to lug their stuff around, which is where the word "luggage" comes from. Wealthy people traveled in groups, usually with servants and horses to carry their possessions. The common people didn't travel very much, or they carried as little as possible in sacks.

By the Renaissance, travel and exploration were becoming more common, and thus the need for luggage increased as well. Seafarers and coach riders packed their needs in trunks, which were solid, roomy and could be carried on a shoulder, should the traveler be strong enough. Trunks came in all styles, and for more than a few centuries were the portable closet of choice. 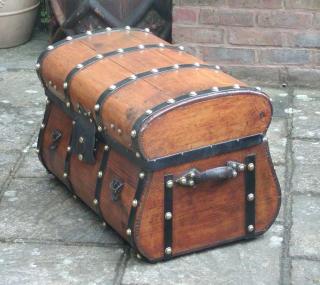 The Jenny Lind trunk was named after Jenny Lind, nicknamed the Swedish Nightingale for her beautiful singing voice. She made her debut in the U.S. during the mid-19th century with P. T. Barnum and was adored everywhere she went. Her stylish clothing became all the rage, as did her luggage.

The Jenny Lind trunk was "loaf shaped" when seen from the side, and was often decorated with metal bracings, leather coverings and fancy locks. These trunks are difficult to find in their original condition, and should date from before 1870 or so. Expect to pay $500 or more for a restored model, and double that for one in original condition.

Steamer trunks were large, flat-topped and made of wood, waterproofed leather, metal frames and strong locks. The trunks were also known as "packers" and could be stacked on top of each other while traveling to or from a ship or train.

These trunks were solid and protected a traveler's belongings fairly well, withstanding the dings and bangs caused by busy porters. Steamer trunks bring from $300 and up on the market in good condition.

Saratoga trunks were named after the city of Saratoga Springs, NY, the most popular summer resort of the 19th century. Wealthy families from the South and the cities packed up and went to Saratoga for the summer to relax, gamble and promenade on the avenues. The most popular luggage of the time was a Saratoga trunk, or camelback trunk. These wooden, round top trunks came complete with wood and cardboard inserts for personal belongings, and were gilded, strapped and decorated as much as possible. 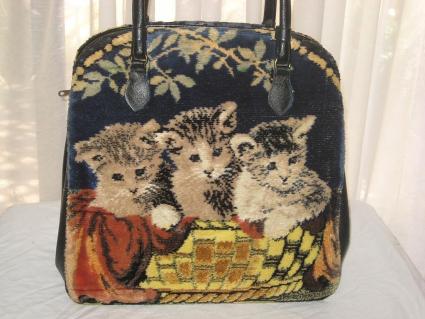 A Saratoga trunk was strong, and it did not allow the porter to stack anything on top of it, so you were sure to see your trunk unloaded before everyone else's. Saratoga trunks can still be found in good or better condition, although a lot of them have been restored.

Carpetbags were made from heavy-wearing carpet and could hold enough clothing for a trip. The bags differed from trunks in that bags were carried onto the vehicle, instead of being stored.

The antiques listed above gave rise to the later luggage from the 20th century and on. As train, ocean, air and auto travel became more accessible to the middle classes, luggage needs changed. No more would a top-heavy trunk suffice, but only smaller, more modern carriers, such as suitcases.

There is no lack of vintage luggage for sale, with examples turning up for sale online, at flea markets and in antiques shops. Many people use the luggage for furniture or decor, stacking suitcases atop one another for visual impact.

Vintage luggage makes great storage space, since the container is fun to look at, as well. There are some tips for collecting which should steer you in the right direction, and make certain your bon voyage buying spree is successful:

Purveyors of vintage luggage can be found on Etsy, eBay and other online shopping sites, but check out these shops as well:

Vintage luggage is as personable as the people who carried it, and today, it adds style and flair to travel. Whether you enjoy owning a Mary Poppins carpetbag or a James Bond suitcase, the sky is the limit when it comes to luggage.