The Early American (1640-1700) furniture style was first practical designs of ladder back chairs, trestle tables and pieces with raised panels. The design focus was mostly on functionality than aesthetics to accommodate the practicality of the Colonists' lifestyles in the New World.

Designs Evolved With Introduction of Motifs

As the furniture designs evolved, the craftsmen began added chipped carvings of various motifs, such as crescent shapes, leaves, florals, and scrolls. Some of the features that identify Early American furniture designs included, finials, turned table and chair legs. The woods used for the furniture depended on the regional and local trees, such as maple, cherry, pine, and oak.

Louis XIV (1660-1690) period furniture was oversized and adorned with massive ornamentation. Sculptures and carvings were bronze gilded. Marquetry was used with different colors of exotic wood species. Ivory and mother-of-pearl were used for inlay designs.

Queen Anne (1720-1760) ruled from 1702-1714, but her furniture style didn't take off until 1720 and grew as a mainstay favorite design. The curved cabriole leg is the signature mark of Queen Anne furniture. The pieces featured curved lines in legs, arms and backs that were daintier than earlier period styles. Cushioned seats often covered with tapestry fabrics added comfort. There was very little ornamentation. The main motif was a modest shell shape. C- and S- scrolls and the S-curve (Ogee) were also featured. The woods used were cherry, maple, poplar, and walnut. 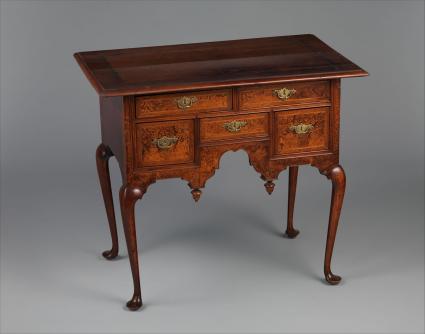 Louis XV (1715-1774) period furniture was less boxy and utilized curved lines. The furniture was lighter and styled more for comfort. The inlay styles of Louis XIV were still favored. The Regency period (1715-1730) continued much of Louis XIV designs. Around 1730, Louis XV's taste emerged and by 1750, he rejected the massive and excessive ornamentations. The furniture style shifted toward Neoclassical designs with Classical Greek and Roman motifs. 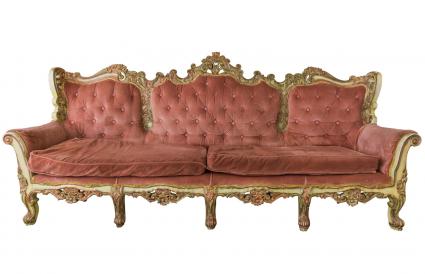 Louis XVI (1731-1811) furniture replaced the past ornate and bold lines for Neoclassical elegance. The popular motifs used were laurel leaves, swags, oak leaves, acanthus scrolls, and the Greek key. The backs of chairs featured either a shield, round or rectangular shape and were upholstered. The legs were column-shaped and fluted. Armrests were extended into a graceful scroll that ended at the front edge of the seat. 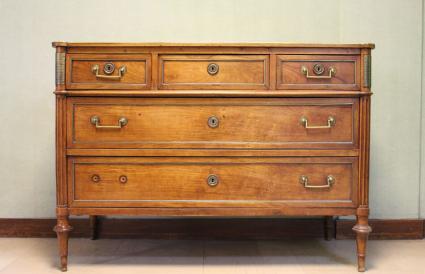 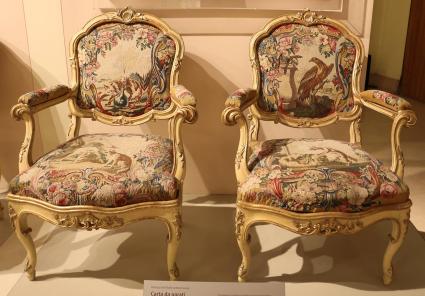 The genius of Tomas Chippendale melded different aspects of other furniture designs, such as Gothic arches, the s-curves of Rococo and the wood lattices of Chinese designs. Chippendale also used the ball and claw design for furniture feet. He carved out of wood the claw grasping a ball, influenced by the Chinese fu dog designs. Chippendale also used fretwork on the legs of chairs, backs of chairs, and the edges of tables. He incorporated the popular cabriole leg from the Queen Anne furniture styles.

Sheraton furniture designs featured round legs that were tapered. Veneer inlays contrasted with the furniture woods. The woods most commonly used for the veneer inlays were tulipwood, mahogany, rosewood, and sycamore. The fittings were made of brass. Carved flutings, swags, and festoons were some of the more common motifs. The pieces were lightweight and favored the straight lines. 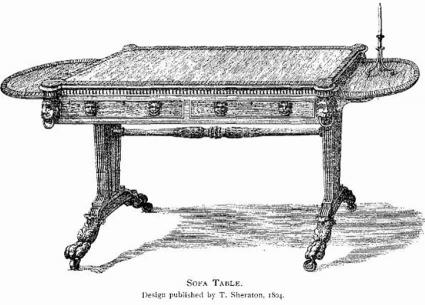 Hepplewhite preferred working with curves and symmetry. The arms on the chairs were curved and contrasted with straight legs. The chair backs featured the iconic shield-shape. The beauty of the wood and inlays were highlighted with very little ornamental carvings. The carving used were swags, feathers, ribbon curls, and Classical urn shapes. Seashells and bellflowers were created using contrasting colors of inlays and veneers (marquetry). Mahogany was Hepplewhite's preferred wood species, although he did turn to maple and satinwood. The furniture feet were tapered or rectangle spade shape.

The Gothic Revival (1740-1900) covered a long period, while the Gothic Revival of furniture covered a shorter span of time (1840-1876). The furniture from the 16th century Gothic period was made from oak. These furniture pieces were often cabinets designed for storage as well as chests. The Massive four posters beds and other furniture pieces featured the Gothic arch often referred to as a cathedral spires as well as carvings of mythical creatures. Dining chairs were high-backed, often backs and seats were upholstered. Other motifs included, four-petal flowers, five arched shapes, and grooved panels.

Some of the features of Victorian (1830-1890) furniture styles included deep seats and balloon backs. Low arms and even armless chairs were designed for women's fashionable wide skirts. The wood furniture was heavily decorated with embellishments of intricate carvings. These ornate carvings traveled over the wood tops of couches and chairs and along the chair arms. There were many motifs that included Fleur-de-Leis, ribbons and bows, fruits, vines, leaves and chubby cherubs. The woods were stained dark and often gold gilded.

There are many antique furniture styles that you can explore. You may decide to mix a few period styles of furniture for an eclectic décor.