People have used lamps for thousands of years, from oil-filled clay to modern examples which exude style as well as light. Overcoming the darkness and having light at hand's length wasn't as easy to do as it might have seemed, and a look at how lamps and shades began sheds light on our domestic history as well.

Ancient lamps used oil made from animal fat, butter, olive oil and other natural fuels. These lamps (and candles) gave off some light, but they smelled or turned rancid (and smelled even more). The smoke turned the room into a foggy mess, and a spilled oil lamp could spread fire quickly. Candles were not much better, dripping hot wax onto floors, furniture and people.

Still, lamp designers kept trying new fuels and new styles in order to improve interior lighting. Lamps had mirrors added to reflect more light into the room. By 1763, the French used hanging lanterns or street lamps with polished metal to light the dangerous highways and byways of Paris.

A major change to lighting soon came from gas lamps, which were fed through gaslines laid around cities. Gas burned brighter than most fuels, but if the rooms were not well -ventilated and the flame went out, then the room's occupants could suffocate. Gaslights were not common in rural areas, so another type of lighting was needed, and that came in the mid-19th century, when kerosene became the fuel of choice for lighting. 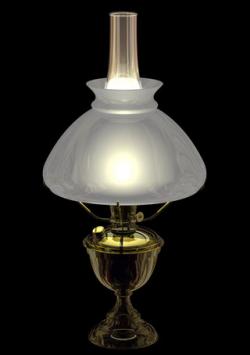 The kerosene lamp was not really new, the design having been used with other fuels. The lamp had a central wick, a base which held the fuel and a chimney which kept the flame safe from drafts while still drawing oxygen. Kerosene itself burned brighter and with less smoke than other combustants, and the fuel became a staple, still used today.

The new lighting was harsher and brighter. The next step was the addition of a lamp shade to soften the light, and since the chimneys could get very hot, the shades were made of glass to prevent fires. Later, electric lights also required shades for ceiling, wall, floor and table lamps. Once shades became popular, companies began producing them in the millions, and today antique lamp shades are avidly sought after by collectors and designers. 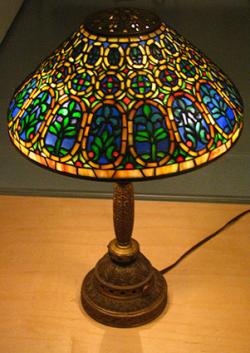 By the 1880s, lampshades were among the most prominent items in a home. Whether the shade was a plain, pressed glass or an elaborately pieced work of art, a shade turned up in every room.

Shades were shaped like flowers, shells, poufs of fabric, balls, cylinders - whatever the designer could imagine eventually turned up in a lampshade. The Art Nouveau period, with its emphasis on curves and the natural world, inspired perhaps the most famous lamp and shade company, Tiffany, to create shades which have brought more than $1 million at auction. But there were many other companies that made glass lampshades which are collectible and sometimes, extremely rare.

Although this New York glass company was short-lived, during its few years in business their lamps and shades rivaled those of the more famous Tiffany company. Their designers included Gazo Foudji, a Japanese artist who trained in French art schools. 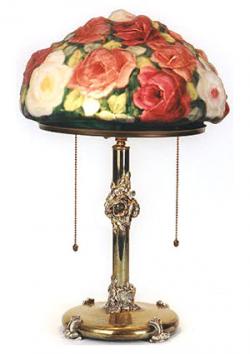 The Pairpoint Corporation produced lamps beginning in 1897. They were well known for their Pairpoint puffies lampshades with pushed out or "puffy" sections. The company received a patent for the process, which involved pouring molten glass into molds, and then polishing and painting the glass. These "reverse painted" shades required extreme skill to manufacture since the artist had to lay down the paint in reverse; the front of the rose was, in fact, facing away from the artist.

Like many lamp companies, Handel was producing glass shades in the early 1900s, along with Tiffany and Pairpoint. The Handel Company was famous for reverse painted shades. The shade was usually a conical shape, and the painting may have been a landscape, still life or floral scene. Handel shades were lovely, and more affordable than Tiffany examples.

In addition to the more famous companies above, glass lampshades were manufactured by other less remembered, or even forgotten, companies. Small factories in Pennsylvania, Ohio and West Virginia produced pressed, blown and hand-decorated glass shades by the score, and many examples can still be found in antiques shops and online.

Among the types of rare glass shades you may encounter are: 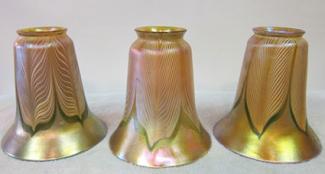 Shedding Light on the Past

If you do purchase rare glass shades, be careful to use only a very weak bulb, since modern bulbs can heat the lamp to the breaking point. Still, lampshades are lovely, and collecting them sheds a whole new light on the past.