If you collect antique glass insulators, you may encounter the venerable Hemingray-42 telegraph insulator. This recognizable model came in many different colors, some of which are rare and valuable. Learn about the history of the Hemingray-42, as well as how to identify one you may have found.

History of the Hemingray-42 Insulator

If you've ever driven by old telegraph lines next to a railroad, you may have noticed the glass insulators sparkling at the top of the poles. During the era when telegraphs were a primary method of communication, these glass insulators kept the wires from coming into direct contact with the sometimes wet poles. This helped insulate the signal and allow it to travel across the country. According to Hemingray Info, the Hemingray-42 was one of the most common styles of glass insulators. Millions of them were produced between 1921 and 1960. Even today, they are extremely common in antique stores, flea markets, and even garage sales.

In general, it's easy to identify a Hemingray-42 insulator. The glass is embossed with the name and style number; both are clearly printed on the insulator. There may be other markings, including numbers, dashes, and dots.

The numbers and other markings on an insulator can help you establish a manufacture date for it. After 1933, the company began to include these marks to indicate the production date. Insulators.info reports that you may see the following Hemingray glass marks:

You'll find Hemingray insulators in many different colors. The most common color for Hemingray-42 insulators is "Hemingray blue," a pretty clear teal color that many people associate with glass insulators. However, it is also common to find them in aqua, pale ice blue, clear, and light green. Rarer colors include a deep, clear green, ruby red, two-tones that happened when glass colors were changed, and very rarely, iridescent carnival glass coatings and milk glass. 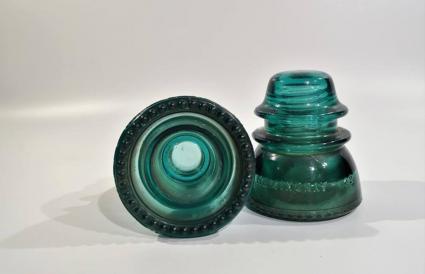 The Hemingray-42 insulator came in two main styles. In the standard style, the small scallops or "drip points" along the bottom of the skirt are rounded. In a rarer variation, they are sharp points. You'll see both at antique stores.

What Are Hemingray Insulators Worth?

Because the Hemingray-42 insulator is one of the most common, they tend to be an affordable collectible. Most sell for under $10. You'll find them in most insulator collections, but there are certain factors that can make them worth a bit more.

These are antiques that had a practical purpose, and many glass insulator spent years or even decades outside in the weather. Most have chips, cracks, discoloration, and other damage. So if you find an insulator in pristine condition, it may be worth more.

While Hemingray blue is beautiful, insulators in this common color won't fetch much. If you have a Hemingray-42 in a rarer color, such as deep green, it may be worth considerably more. Milk glass insulators are some of the most valuable because of their rarity.

To assign a value to a specific insulator, you need to compare it to recently sold models in similar condition. Here are a few sample Hemingray-42 values:

If you're considering expanding your collection or simply enjoy learning about this important part of telecommunications history, take a moment to read up on antique glass insulators. There are dozens of brands and many different styles and colors out there, making collecting insulators a fun and affordable hobby.