Vaseline glass is one of the more unusual types of antique glass that collectors can investigate. This glass has certain chemical properties that actually allow it to glow in the dark under a black light.

What Is Vaseline Glass?

Vaseline glass is also known as uranium glass. The vaseline name comes from the yellowish color that looks similar to petroleum jelly. The uranium name comes from the fact that there is between 0.1 to 25% uranium dioxide in each piece of vaseline glass, although some may think it's a reference to the glass' ability to glow in the dark which makes people believe it's radioactive. Most vaseline glass had a tiny amount of uranium dioxide of around 0.1 to 0.2%.

Uranium dioxide has been used to make glass for centuries and pieces have been found as old as from 79 A.D. It became popular to add uranium dioxide to glass in the 1830s and an interest in vaseline glass boomed around the 1880s. Some of the most common glassmakers were Adams & Company, Steuben Glass, Baccarat and Cambridge Glass Company. Vaseline glass makers began with the yellow pieces and eventually added in iron oxide to make pieces with the green color which were referred to as uranium glass, although technically the yellow and green pieces are both uranium glass. 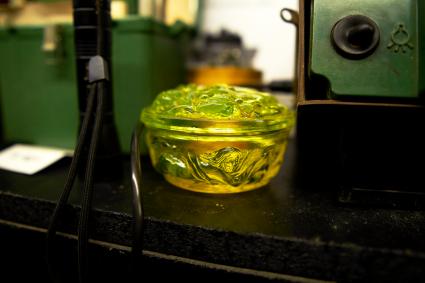 The glass faded in popularity after the 1920s as regulations were enacted in 1943, heavily restricting the use of uranium due to its use in the World Wars. This lasted until 1958 when the laws were loosened and glass makers began producing vaseline glass again in limited quantities as uranium oxide, although available, was cost prohibitive to use widely in glass making.

Vaseline Glass In Other Countries

The term vaseline glass is used in other countries to refer to different glass formulations.

Because it contains uranium and glows, you might think that vaseline glass is radioactive. It does have some tiny degree of radioactivity to it, but not in levels that would be harmful to humans. The glow is also not caused by radiation but because ultraviolet light causes the electrons in the glass to become excited and emit photons. Although there have been rumors about glassblowers dying from cancer, there is no direct proof linking their deaths to blowing uranium glass. Vaseline glass was reported to be safe by the U.S. Nuclear Regulation Commission in a 2001 report that examined the potential for harm and found that you're more likely to be exposed to higher radiation from everyday household electronic items.

How to Identify Vaseline Glass

Vaseline glass can be identified primarily by its color and whether it can glow under a black light. The glass should range in color from a bright yellow to a greenish-yellow shade. When placed under ultraviolet or fluorescent light, it should glow a bright green color. Vaseline glass collectors have popularized a saying regarding the glass, "If it doesn't glow green, it's not vaseline." The glass is also usually translucent and has been described as having an "oily" look to it. Vaseline and uranium glass pieces tended to be dishware, pitchers, mugs, bottles, vases, chandeliers, jewelry and figurines. 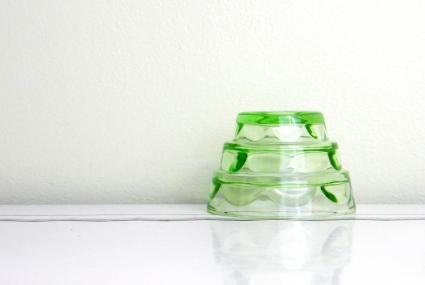 Custard glass is another type of yellow glass that was popular during the same time period. It also is made with uranium and will glow under an ultraviolet light. However, custard glass has an opaque rather than translucent appearance. It also has a "fire test" that collectors can use to identify it. If a piece of custard glass is held up to light, a reddish opalescence sheen should appear.

While some collectors enjoy finding vaseline glass pieces for their novelty, others enjoy the glass for its unique beauty and coloration. If you want to start looking for vaseline glass pieces at your local antiques store, make sure you bring a black light flashlight along with you to test out its glowing properties.