Ranging from a single, elegant pearl to an ornate collection of beads and jewels, antique hat pins once served the practical purpose of securing women's hats to their hair. Today, collectors show off these little jeweled treasures in displays or wear them on the lapels of jackets. Because they were so ubiquitous during the Victorian and Edwardian eras, there are still many hat pins available for new and established collectors to purchase.

Where to Buy Antique Hat Pins

Whether you've been collecting for years or are just beginning this enjoyable hobby, you can find hat pins at a variety of retailers on and offline:

Hat Pins Through the Years 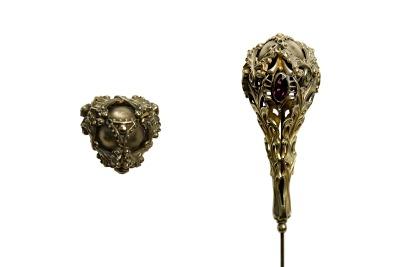 The heyday of hat pins began in the 1820s as the Regency period drew to an end and women began securing their hats to their upswept hair with hat pins. According to the American Hatpin Society, advances in manufacturing contributed to the huge number of pins created in the late 19th and early 20th century. Each era saw changes in the design of these important fashion items.

Hat Pins in the Victorian Era

The large, elaborate hats of the Victorian period required long pins, sometimes up to 14 inches in length. Common hat pins were made for the average person and known as a "working girl" hat pin. Working girl hat pins were mass produced and had a simple black or white bead on the end. Fancy hat pins featured precious metal and gemstones, and these were for special occasions or the wealthy. Oriental influences were popular during this period, and in the later part of the Victorian era, the Art Nouveau movement resulted in designs inspired by nature.

Hat Pins in the Edwardian Era

The fashion of the Edwardian period included very large hats and very long hat pins. However, it also coincided with the women's suffrage movement. Fearing that women would use their long hat pins as weapons as they fought for the right to vote, states passed laws to limit the length of hat pins and also stated that hat pins had to have the sharp pin end covered with a safety guard. During the 1910s and 1920s, the Art Deco movement contributed to layered, geometric hat pin styles.

End of the Hat Pin Era

As women's hair styles and fashions changed, hat pins became obsolete. The short bobbed haircuts and bare heads of the 1920s and 1930s meant that elaborate hat pins were no longer necessary.

Over the years, manufacturers have crafted hat pins out of a variety of materials:

It should be noted that there are many fake antique and vintage hat pins on the market. According to the American Hatpin Society, the chances of buying a fake hat pin at an antique shop or from an online auction are approximately ninety percent. Hat pins are one of the easiest antique items to produce a fake. Before you buy, take the time to learn how to tell the difference between original antique hat pins and fakes. The following resources can provide more information about hat pin collecting, as well as advice about spotting a fake.

Whether you have only one or two hat pins or dozens of them, these beautiful works of art were designed to be seen. You can display your collection in a cabinet or on top of a dresser or show off one or two pretty pins on a small pillow. When you're going out, it can be fun to wear a favorite pin on your lapel. No matter how you choose to show them off, these pretty pins will turn heads just as effectively today as they did a hundred years ago.