Different in looks than a traditional copper penny, the 1943 steel penny's value and appearance make it notable to collectors and enthusiasts. The wartime history of this old penny is also fascinating to learn. Find out how to identify a steel penny from 1943 and how to figure out its value.

History of the 1943 Steel Wheat Penny

In 1943, the United States was in the middle of fighting World War II. Many resources were being diverted to the war effort - from food and fuel to metals like copper. Previous and subsequent pennies were made of copper, but the 1943 penny is different. Because ammunition and electrical wires had to be crafted from copper during the war, the US Mint decided to make the 1943 penny out of steel instead. The pennies were produced in all three US Mints: San Francisco, Philadelphia, and Denver. Each penny had a thin coating of zinc over a steel base, giving it a unique silver color.

How Many 1943 Steel Pennies Are There?

How to Identify a 1943 Steel Penny

Identifying a 1943 steel penny is fairly easy. On one side, you'll see Lincoln's head and the date 1943, and on the other, you'll see the wheat design used in older pennies. Beside the unique silver color, steel pennies have another identifying feature. They're magnetic. Copper pennies are not magnetic; if you hold a magnet next to an ordinary copper penny, it won't stick. However, if you hold a magnet next to a steel penny, it sticks just like it does to your refrigerator. 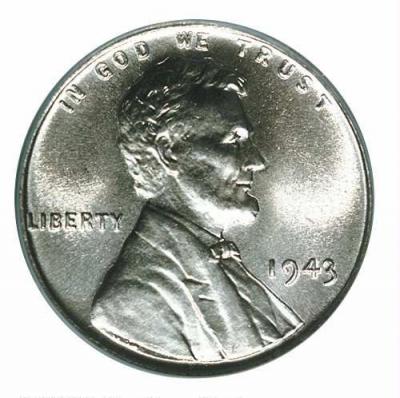 Obviously, condition has a huge effect on the 1943 penny values. The Numismatic Guarantee Corporation offers these grading guidelines:

The best way to determine how much your steel penny is worth is to have it appraised. However, its only worth appraising if you suspect it may be valuable. You can get an idea about the value by comparing sales of similar coins:

1943: A Fascinating Year for Pennies

If you love rare pennies, the 1943 steel wheat penny is just one of many interesting examples. The same year, an accident resulted in some of the pennies being struck in copper or bronze. These 1943 pennies are even more valuable than their steel counterparts because of the mistake and are among the most valuable pennies. Regardless, 1943 was an important year for pennies and offers a fascinating glimpse at wartime history.