Every beginning coin collector should educate themselves so they can make good decisions when buying and selling coins. A basic library of coin collecting references is a necessary resource for the beginning collector.

The nine coin collecting books listed below were written by experienced numismatics, are informative, helpful, fun, and outstanding resources for the beginning coin collector. These books can teach them about the coins, their history, what to look for, and guide them as they begin to build their coin collection.

Coin Collecting for Dummies, written by Neil S. Berman and Ron Guth, appeals to coin collectors at every level, from beginner to advanced. It's a great general reference that can excite and keep you excited about coin collecting. It covers topics such as what coins to collect, how to store them correctly, repaired, restored, and recolored coins, pricing coins, finding a good coin dealer, and buying coins at auction. It also explores rare, expensive, and esoteric coins. It has an abundance of useful information to help a newcomer get the most out of coin collecting. 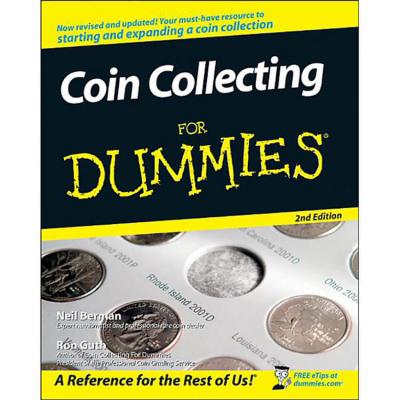 For Dummies: Coin Collecting for Dummies

2. A Kid's Guide to Collecting Coins

You don't have to be a kid to appreciate A Kid's Guide to Collecting Coins written by Arlyn Sieber. This is the ideal book to aid beginners in understanding, appreciating, and starting a coin collection. It is a great reference book with general information and color photos. It covers each coin's history, which coins are valuable, and what makes them valuable.

3. Whitman's Guide to Coin Collecting: An Introduction to the World of Coins

Whitman's Guide to Coin Collecting: An Introduction to the World of Coins by Kenneth Bressett, former president of the American Numismatic Association, is the definitive reference on the world of coins. It covers all the varied aspects of coin collecting, including how to get started and care for your collection, the grading techniques, coin prices, and values. The author does this in such a way that that makes coin collecting seem both fun and potentially lucrative to a newcomer.

Whitman's Guide to Coin Collecting: An Introduction to the World of Coins

The New York Times Guide to Coin Collecting: Do's, Don'ts, Facts, Myths, and a Wealth of History by Ed Reiter is an excellent all-around guide that's an easy read and provides a a great deal of information that every beginning coin collector should know. It covers the origins and history of coins, how they're made, where they should be bought, and how to care for the coins. It also includes an extensive bibliography for further reading.

One reference no beginning collector should be without is a price guide that tells them the value of the coins they have or want to acquire. The best of these is A Guide Book of United States Coins, written by R. S. Yeoman and edited by Kenneth Bressett. Also known as the "Red Book," it surveys American coins, presents retail values, is enhanced with color photos, historical information, and is updated annually.

Coin Clinic 2: 1,001 More Frequently Asked Questions written by Alan Herbert, is a compilation of answers to the most frequently asked questions that the author received through his weekly coin clinic column found in the Numismatic News. Its chapter headings are in alphabetical order and its topics are numerous. It's a wide-ranging examination of topics beginning collectors will enjoy browsing through. It contains answers to questions they may wonder about or perhaps never even thought about asking, but that are great to know.

7. Strike It Rich With Pocket Change

If you're a beginning coin collector, Strike It Rich With Pocket Change: Error Coins Bring Big Money, written by Ken Potter and Brian Allan, can be an exciting and fun read. The thrill of the hunt and the potential for a great reward is at least part of the enjoyment of coin collecting, and this is a book that can be a beginner's trusty treasure map. It's a reference book that they'll repeatedly consult in their hunt for the rarest of coins.

Strike it Rich with Pocket Change

The Coin Collector's Survival Manual revised 7th edition by Scott A. Travers is an indispensable guide for novice coin collectors. It contains financial and legal advice for buying and selling coins and how to tell if a coin has been altered, doctored, or is counterfeit. It also has information on how to avoid scams and protect your coins from disaster. Overall, this is a fantastic guide on buying, selling, collecting, investing in coins, and how beginners can avoid some pitfalls of coin collecting.

9. The MacMillan Encyclopedic Dictionary of Numismatics

If you're getting into coin collecting game, you'll need to know and understand the lingo. The Macmillan Encyclopedic Dictionary of Numismatics by Richard G. Doty is a dictionary/encyclopedia that lists coin collecting terms in alphabetical order for quick reference and provides in-depth information on subjects of interest to coin collectors at all levels.

The MacMillan Encyclopedic Dictionary of Numismatics

The World of Coin Collecting

If you're a beginner in the world of coin collecting, you'll soon discover that coin collecting is an adventure into history. Every coin has a story behind it and you're likely to learn more history as a coin collector than you ever did in a history classroom.