The antique apothecary scale is a meaningful symbol that has been depicted by a vast array of different cultures, countries, and creeds. From Egyptian mythology to Lady Justice, scales have become associated with accountability, and this iconography's popularity has made it a lasting collector's item for hundreds of years. So, before you set about bidding on a set of antique apothecary scales to weigh your smoothie ingredients, take a deeper look at their history and how they've continued to attract collectors for the past few decades.

Unsurprisingly, balance scales have been around since antiquity and have been used for a variety of functional purposes for thousands of years. At its root, the balance scale has been used as a tool to measure the unknown weight of an item (like food, medicine, herbs, and so on) against a set of known weights. Thus, as a person adds known weights in calculated increments, they can determine the exact weight of an item by seeing how much it takes for the pan full of the item in question to become level with the weighted pan.

While antique apothecary scales were mostly manufactured to be functional, many of them were ornately designed - though hardly ever venturing into something ostentatious - and were made out of luxury woods and metals. Most antique apothecary scales were designed using a hanging, T-shaped balancing system, and included a set of apothecary weights along with two different pans that hung from either end of the scales' T. Furthermore, there was normally a base that the scale either rested on or was molded into which housed the weights when they weren't being used. Here are some of the materials that the apothecary scales and their cases were made out of. 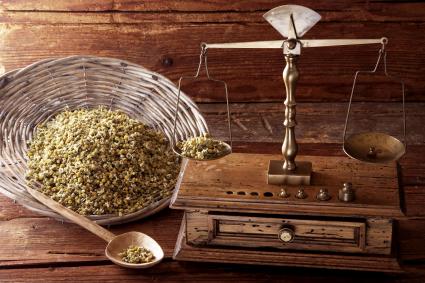 Given the substantial shift towards modern medicinal practices in the early 20th century, it is unsurprising that the business of manufacturing pharmaceutical scales would be both lucrative and competitive. This means that there are a vast number of American and European companies you could possibly find stamped onto an antique apothecary scale. These are a select few of the manufacturers you might come across when shopping for one of these antique pharmacy scales. 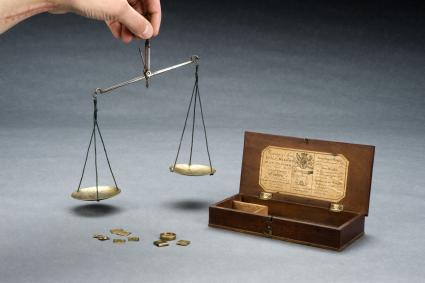 Despite this common historic tool not being a particularly rare antique, average antique apothecary sets are usually priced anywhere between $50-$250. Antique apothecary sets, which are made of higher quality materials, are from the 18th century and early 19th century, and are housed in glass cases, are valued between $200-$400 on average. For example, a French apothecary brass scale from the 19th century sold for about $400, and a similar French apothecary scale sold for almost $500 at auction. In comparison, a luxurious antique English mahogany and brass apothecary set is listed for a whopping $1200.

If you already have an antique apothecary scale in your possession, or you've recently purchased one for yourself, then you might have the inclination to scrub out the dirt and grime from the antique's every nook and cranny. Now, there is some debate among collectors as to whether or not antique apothecary scales should remain untouched or if they should be cleaned and polished, but it's ultimately up to the owner's preference. If you do want to help your scales shine, then you'll want to wipe down your scales with a dry, soft cloth to remove any dust or grime, and then you'll want to apply an appropriate metal polish to the scales and weighs themselves. Be extremely careful to not have any metal polish touch the scale's wooden cases, because it can tarnish antique wood and create lasting damage.

The Practicality of Antique Apothecary Scales at Home

Antique apothecary scales are one of the few antique items whose technology has not been rendered completely useless with the advent of the industrial revolution. So, if you do bring one of these antique apothecary scales home with you, you might find yourself struck with the urge to start weighing all your small ingredients the old-fashioned way.