The history of antique street lighting is wide and varied across the United States and Europe. Gain a better understanding of the history, the evolution, the types of lamps and fixtures, where to buy, and their value and cost so you can choose the light to suit your street.

According to the Worcester Art Museum, the Greek city of Antioch, aka "The Athens of the East", which existed between 300 BC to 600 AD, had street lighting, but collectors often focus on 18th and 19th Century lighting.

The evolution of lighting technology and design soared in America and Europe; the changes are too numerous to pinpoint the exact dates of who did what first and where. The candle was the precursor to oil, gas, and electric lighting. Two notable cities on each coast of the United States can provide insight into their history and evolution.

In 1792, gas lamps replaced candles and oil lamps when William Murdoch lit up the streets of Britain with his invention of the gas lamp. In 1817, America followed Britain's lead and Baltimore, MD, became the first city in the country to use gas lighting and The Gas Light Company of Baltimore was "...the first U.S. commercial gas lighting company by distilling tar and wood to manufacture its gas."

The City of Angels and Electric Street Lights

Los Angeles was dark until 1867. If you hopped into a time machine and set the dial to 1867, you would see a lamplighter on horseback gallup down the streets as he skillfully lit or extinguished outdoor lamps at dawn and dusk. That changed in 1882 when CL Howland constructed the first electric street light in the country, 150-foot tall metallic arc lamps. 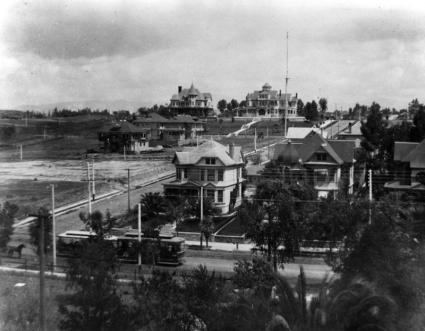 Jack Feldman, Curator of the Water and Power Associates Museum, said that during the early 19th century, there were two basic types of electric street lights: the Utilitarian, (lights that hung from wires), and the lamp Electroller, (free-standing lights). Feldman said, "the efficiency of the light dictated the design of the of the posts", or the post's structure, was designed to fit the lighting fixture. Fixture grading terms were known as candle power, lumins, and finally, wattage. Pole design, lighting and efficiency continued to progress.

Los Angeles streetlight designs included poles that held from one to seven- globes with simple or ornate designs and named after the districts where they stood. For example, if you walked down Wilshire Boulevard, you would see a Wilshire street light. Keystone Iron and Steel was the most prominent manufacturer in Los Angeles. 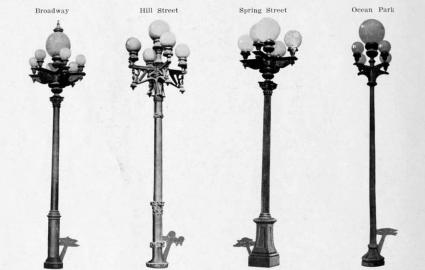 When you look at a fixture at the top of a post, you may think that ta globe or light was just plopped on. If you look at the blueprints of some of the designs, you will see that they are quite intricate, well thought out down to the last detail, meticulously diagramed.

Feldman, also a retired engineer from Water and Power in LA said that almost every piece of electrical equipment produced for utility companies were branded with the manufacturer's logo. Worthpoint has a few examples.

In an interview with Bjoern Dahlhaus from Dahlhaus Vintage European Lighting in Germany, he confirmed that in cities like Dusseldorf, out-of-use, gas-powered streetlights are purchased by homeowners for use in their gardens. Since the poles were made from solid cast-iron, they will last for decades, however, the crown tops made from tin, need to be replaced by a company such as Dahlhaus. They will manufacture a matching replacement piece with simple parts to hold an electric lightbulb. He said that homeowners personally refinish the pieces or hire a professional to do so. Additionally, there is a growing demand for cities to keep and restore the original historic lighting.

Styles of street lights varied throughout the late part of the 18th century and early 1900s in the United States, with Victorian influence seen throughout early street light systems.

Early Victorian lamps were generally cast or wrought iron with elaborate curling decorations, and multiple panes that allowed light to shine from all directions. Lamp tops and caps were made of copper (pointed tops were "Holland" tops after the lanterns used by the Dutch to signal ships), cast metal or brass, and bases were ribbed or molded with designs, and could rise to more than 10' in height.

A gas post featured a lamp topped with a small-paned glass and metal lantern with an eagle or other finial. These posts were used from the mid-19th century onwards in New York City and other urban areas. Short arms allowed the lamplighter to rest a ladder against the lamppost. The arms disappeared once electric lights were introduced. If the post was short and thick, it was called a "bollard," after the posts used to secure ships to the dock.

A few other styles included the following.

Late Victorian streetlights were called electroliers or luminaires, in part because electricity was now used in place of gas. The streetlights were still mounted on posts or stands, and could be decorative and ornamental or plain and utilitarian. "Presidential" bases had garlands molded into the design, while an urn base may had an urn and floral decorations.

Streetlights from the pre-World War I era often had curling designs inspired by Art Nouveau, or classical designs based on ancient styles, like the Windsor Streetlight from 1914 Los Angeles.

Lyre tops were streetlights with a decorative top resembling a lyre or "harp". The shade was held inside the lyre, much like a bulb is protected inside a table lamp.

The end of the first quarter of the cenutry highlighted several street lighting styles.

Where to Find Antique Street Lights 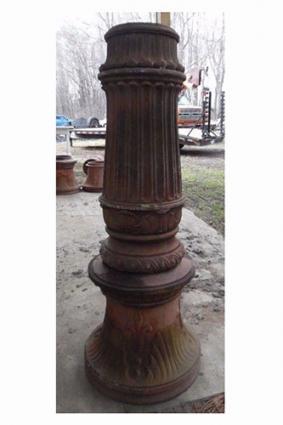 You can find antique streetlights in a number of places, or replicas made by an original street lamp manufacturer in an effort to keep their history alive. 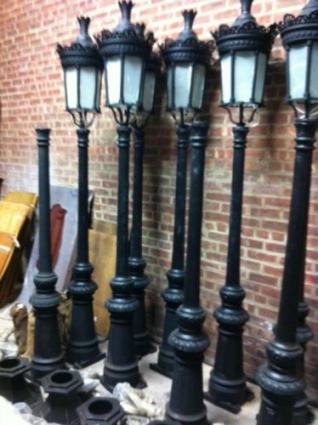 Antique fixtures in disrepair due to age and long exposure to the elements can be restored without detracting from the value. However, if a part needs to be replaced, it has to be identical in order for the piece to remain authentic and hold value.

If you buy an antique street lamp in need of rewiring, Feldman says, "You need to be aware that most streetlamps are wired at 120/240 volts, which is what you would find in a typical house. So there is no problem there. Some of the very old streetlights ran at 4,800 volts (that is in LA), so those street lamps would have to be rewired for 120/240 for safety reasons." When in doubt, seek out a certified electrician.

These fixtures seem to be a bit pricey for the collector, depending on where you buy, and whether your piece is American or European, whether it's in one piece, or just miscellaneous parts. 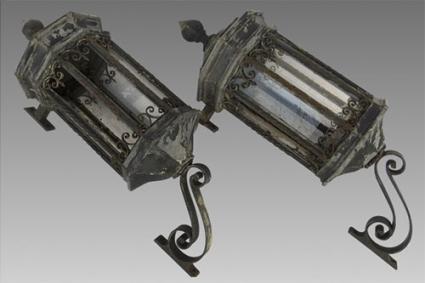 Review some of eBay's sold items to get an idea of value before you buy or sell. You will find a variety of fixtures, poles, parts, and styles in original condition with patina ranging from $22 to $1,500.

Visit current auctions and track their asking prices to see what various pieces cost to start and follow the auctions all the way through to find out their final selling prices.

If you are unable to find a value of a lamp, seek out an appraiser in your area, or contact Antiques Road Show for advice. Consumer Reports has two suggestions for reputable appraisers.

Another source would be to search for a free online appraisal.

Antique streetlights are a piece of history quite common to see in United States and Europe. They are not always collected by the average antique aficionado, but are also purchased by homeowners to enhance their properties, or sought after by historic preservation societies in an effort to keep the look and feel of past centuries alive in their towns.