Of all the farm toys, from barns to cows, windmills to machinery, it's the old toy tractors that are among the most popular collectibles. Whether you grew up on a farm or just wish you did, toy tractors represent the ingenuity and craftsmanship of American rural life.

Tractors Go From Farmland to Toyland

Until the late 19th century, farming was based on physical strength: plows were drawn by horses, mules, and oxen, and guided by humans who walked or rode behind the animals. Steam and gas powered engines appeared in the 1869s and 1870s, and by the 1880s, tractors. The word "tractor" itself is a bit of a mystery. It was used as early as 1890 by George Edwards, who patented a steam-driven farm vehicle, which gained traction by the motor's power (thus, "tract-or").

Henry Ford believed that improved agricultural equipment would advance civilization so by 1917, Ford and his son had opened the Fordson factory to produce the Fordson Model F gas-powered tractor. The popularity of the machine was enormous and soon, tractors were common farm machinery.

It wasn't long after the invention of a full-size tractor that companies began to pay attention to the possibilities offered by farm-related toys. After all, in 1900 the US labor force was composed of nearly 40% agricultural workers and farmers, and millions of children were fascinated by the big, noisy farm machines.

Arcade Manufacturing Company was one of the first companies to produce toy tractors. Based in Freeport, IL and founded in 1885, the company started out producing home goods, like coffee grinders, but by 1921 they introduced a toy car and not long after, perhaps the first commercially made toy tractor, the Fordson. One of the fun mysteries of this toy is whether the man depicted driving the tractor is Henry Ford! Arcade proved that Americans would pay more for a farm toy, and other companies soon followed. (A detailed history of Arcade Toys, including tractors, was written by Al Aune.)

Toy Tractors on the Assembly Line

While many companies make toy tractors, the production methods tend to fall into a few areas:

Virtually every tractor company is represented by an antique (100+ years old) or vintage (50 to 100 years old) toy, including: 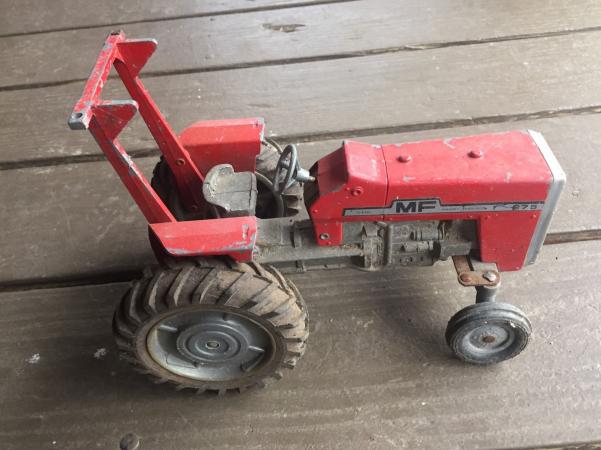 Since there are thousands of toy tractors for sale along with many new collector sets, determining rarity and value can be confusing. Recent sale prices can be checked on sites like WorthPoint (a subscription value site) or eBay, or you can begin with basic price guides and then move on to specialty guides. Experts can always be consulted in person at local antique stores or online via websites like LoveToKnow's What's It Worth? community.

Copies of guides specific to toy manufacturer, like Ertl Toy Tractors by Patrick Ertl and Catherine Lee Phillips, general books on collecting farm toys, like Standard Catalog of Farm Toys by Karen O'Brien, and guides to particular tractor companies, like John Deere Collectibles by Brenda Kruse. Locate the books through various book stores and resellers, as many may not be currently in print.

Antique toy tractors (100+ years) don't always bring the highest prices, and sometimes vintage or recent releases can be just as costly as a very old piece: according to Farm Collector, the following antique and vintage tractors are highly sought after, as indicated by realized prices (per WorthPoint via their subscription section):

What to Look for When Purchasing

Although people of all ages collect toy tractors, many tractors are purchased for display, not as toys. Prices range from $50 into the thousands, but good collectible examples can cost well under $200 when sold. The best way to ensure that you are purchasing what you want is to buy from a dealer who will back the sale. Toy tractors are big business and most dealers are honest, know their stock, will guarantee your purchase, and answer your questions. In the meantime, some basics to consider include:

If you need to do repairs on antique or vintage toy tractors (or build your own), you can locate materials and parts at the following companies:

Additionally, Toy Tractor Show provides links to many dealers, and sources for toy tractor repairs and purchases; they also list toy tractor shows across the US where you can find vintage and rare toy tractors for sale. They may also have kits available at their various shows - look for an upcoming one scheduled for your area soon.

If you love farming, history, and technology then collecting toy tractors may be the perfect hobby for you. It doesn't take long to fall in love with these miniature works of craftsmanship and to appreciate having a farm tractor on your shelf.