Collecting antique bubble gum machines can be a fun and profitable venture, however, before you buy or sell, become familiar a few basics. It's important to know some background on these coin-operated machines and how to identify them properly as you start your collection.

Gumball machines are classified as antiques if they are aged 100 years or more which is the industry standard noted by J. Michael Flanigan for Antiques Roadshow.

Before the Dispenser Came the Gum

Chewing gum dates back as Greek Ancient history. A few thousand years later, John B. Curtis invented the first gum that sold on the market in the , followed by William Finley Semple, who acquired the first patent for gum in 1869. Thomas Adams' Tutti-Frutti gum debuted in 1888.

Adams invented the first gumball machine in 1888. His marketing savvy became apparent in 1907 when he placed coin-ops in New York's highest traffic areas -- train platforms. The dispensers were home to his new flavored gums, Black Jack and Tutti-Frutti One-Cent Gums. Later, Adams Sons and Company introduced the machine that held balls of gum.

Machines most remembered today are most likely those that resembled models of the 1920s and 1930s that were constructed of cast iron and covered in fire engine red porcelain. They stood on claw feet and topped with a glass bowl filled to the brim with colorful balls of gum.

During Prohibition in the U.S., (1920-1933), the Hawkeye Novelty penny dispenser gave every tenth customer a free gumball. Officials banned the Hawkeye because they thought it too closely resembled a gambling machine.

Post World War II, coin-ops were constructed of aluminum and plastic, instead of steel and cast iron to keep inline with the economy. Moving parts in machines were eliminated during this period.

Production continued during the 1950s and 60s and gum dispensers could be found in supermarkets and drugstores. Today, the Oak Acorn machine, a popular model during that time period, is still being built and sold.

Chad Boekelheid, South Dakota veteran collector, dealer and owner of Chad's Coin Op, said in an interview that animated gumball machines from the turn of the Century are among the rarest, most valuable, and most sought after in the industry. Below are photos of items from his own collection, or from his wish list. There are many examples and models of antique gum/candy vendors. 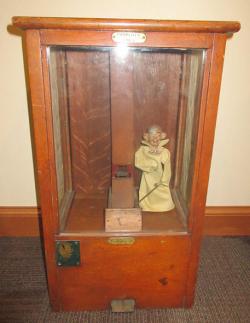 Chad notes that the wooden animated dispenser from 1899 with the yellow kid is rare and hard to find. He describes its features:

The Blinkey Eye Soda Mint Gum Vending Machine is from 1907. Features are the following, according to Chad:

Chad says that the Columbus model A is easy to find, and is recommended as a good place to start for the new collector. Its features include:

Live Auctioneers has a Zeno from Dan Morphy Auctions, LLC. Their model has writing on both sides, although there is another version without writing on one side. The features of the model include:

Be wary of online sites; some items listed as original are replicas. Before you shop, be armed and ready to shoot the right questions and know some of the tell-tale signs in order to determine a machine's authenticity.

John Papa of National Jukebox Exchange in Mayfield, New York is a thirty-five-year veteran collector, dealer and restorer who specializes in antique penny arcade machines and jukeboxes. John mentioned that although there were countless models and styles produced at the turn of the Century, most all antique coin-operated vending machines were constructed with the same materials, encasements and mechanisms, and the characteristics used to determine authenticity are the same. John offers a few of those characteristics.

Another way to avoid being fooled, or scammed when you buy or sell is to add The Silent Salesman Too by Bill Enes to your library. Chad Boekelheid said, "It is known as the Bible of Vending Machines, and every collector should own a copy." The name, silent salesman, coined in the early part of the 20th Century, made reference to how the machines sat on counters in businesses and sold gum without the help of a live salesman.

Where to Buy and Sell

Like other collectible antiques, you have a variety of places where you an buy and sell the machines. Traditional places like garage and yard sales, estate sales, flea markets, and thrift stores are just places to start your search.

Auction houses can be found in any corner of the world, and vary in specialty of merchandise, price range, clientele served and the manner in which business is conducted. Rago Art and Auctions, in Lambertville, New Jersey is just one example of a high-end re-seller with strict parameters regarding the price level of merchandise accepted. Free public appraisals are offered each month conducted by some of the top experts in the world; some of whom are regulars on the Antiques Road Show.

Live Auctioneers host real-time auctions for auctionshouses in 47 countries. You can bid live when you register as a bidder on their site, and is also a great reference to learn the latest industry news and helpful tid bits.

Invaluable is a great source to find and buy items, or to locate an auctioneer in your area; they provide a free, online directory of 2000 auction houses. You can also do a search by category of merchandise. Your Gameroom Place is a source to purchase a variety of vending machines, repair manuals, books, and pricing guides.

Build a network of others who have shared interests, and seasoned collectors; it's a great way to meet the who, what, when and where of the business.

Make regular appearances at these venues and people will get to know you; the more you are involved, the quicker you will be up to speed.

Whether you're an aspiring or veteran collector of antique gumball machines, or any antique or vintage item, the most significant factor that will attribute to your success is knowledge. When you begin, keep your focus on one period, style or manufacturer at a time until you feel comfortable enough to move on to the next. Stay on top of your game; do your homework. Learn how to recognize replicas posing as authentic products, use resources, network, get involved in associations and don't be afraid to ask questions. You will be an expert in no time at all and become an intelligent buyer or seller. Happy shopping!