For thousands of years, people have worn decorative items for protection against evil or to bring luck and prosperity to the owner. While these ancient charms and amulets are still eagerly sought after by collectors, later examples from the Victorian and Twentieth Century are just as appealing. Wearing, sharing and collecting charms continues to be a popular pastime, and the story of charm bracelets is filled with mystery, magic and style.

Amulets were made specifically to keep away curses and ill wishes from the wearer. In ancient Egypt, an amulet could be worn to protect against an attack by the great river horse, also known as a hippo. If the amulet was carved out of a particular stone, that in itself might provide even great security for the wearer, who might choose a green stone like beryl for prosperity (the green represented vegetation and regrowth) or a red stone like carnelian (the red represented blood and life) for safety from a serpent's deadly bite.

Amulets were worn as jewelry, but also tucked within the mummy wrappings. This ensured that the dead would have protection in the next world. Charms, on the other hand, were made to confer good luck on the wearer, and were often worn on strings around the neck.

The Romans also loved the lure of charms, and wore them on rings, bracelets and necklaces. Ancient examples seem to indicate that the charms and amulets were collected at different times, and then added to necklace or bracelet, much as we do today. 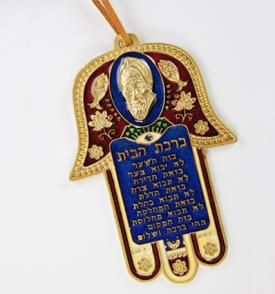 In the Mideast, the hamsa, or hand of Fatima (also called the hand of Mary or Miriam), was both a charm (bringing prosperity) and an amulet (keeping away the evil eye.) Hamsas were worn on necklaces or bracelets and were particularly important to mothers, who gave their children the symbol as protection.

The Dark Ages and Beyond

Examples of charms as religious symbols have been found from the Dark Ages or early Christian era (when charms were written on paper and placed next to the wearer's body), the Viking period and later through the Renaissance and after.

From Queen Victoria to Vintage Charms

Charms had a renaissance, so to speak, when Queen Victoria set the style in the late 19th century. Victoria was a devoted wife to Prince Albert, and together they raised 9 children. Albert started a tradition of giving Victoria a heart charm at the birth of each child. The charms were also lockets, and held strands of hair from each infant. A second charm bracelet had charms which held a photograph of Albert, and were enameled with images of crosses, and decorated with diamonds and inscriptions. Albert died at 42, and Victoria outlived him by 40 years. She instructed that the charm bracelet never be worn by anyone else.

Charm bracelets grew in popularity during the 20th century. Charms were brought home to wives and girlfriends by returning soldiers. New materials were used for bracelets, including platinum, celluloid and precious stones.

Charm bracelets are back and highly collectible with prices ranging from a few dollars for a vintage charm to thousands for gold and jewel-encrusted examples. Whether you buy an entire bracelet and charm collection, or assemble your own bracelet charm-by-charm, you may want to consider the following:

Antique charm bracelets come in all shapes and sizes, and some can hold dozens of charms. Antique sterling silver examples start at $70 and with the charms, the cost can rise to hundreds of dollars.

Charm subjects are nearly endless, and reflect everything from technology (airplanes and telephones) to cancan dancers with moveable legs. The hunt is just as fun as finding the perfect charm. Flea markets, antiques malls and retro shops will all have charms and bracelets for sale. Etsy.com has dealers who sell vintage and antique charms, but you have to move fast; great old charms sell quickly.

For lovely examples, check online at these shops, which include overseas offerings:

Collecting charms is challenging and fun. The tiny trinkets are a window to the past, and let you see into the loves, lives and pastimes of ladies long gone. Start your collection of antique and vintage charms, and keep your own story close at hand.