Hairbrushes and hair combs have been used to tame humanity's hair for centuries, and antique hair brushes are beautiful examples of how past craftsmen transformed functional tools into works of art. Take a closer look at these bathroom staples to see how these old hair brushes evolved into the modern hair dressers' weapon of choice.

Early History of the Hair Brush

You can find references to hair brushes and combs in many different textual and artistic records from the ancient world, but the first brush manufacturer wasn't established until 1777 when William Kent founded the company Kent Brushes in Hertfordshire, England. These brushes were rather simple, made out of wood and natural bristles, but they laid the foundations for how hair brushes would be designed for much of the 19th and 20th centuries.

Interestingly, antique hair brushes were incredibly important tools used in the process to create historic hairstyles. Since hair soaps and lathers were not widely used until the early 20th century, these natural fiber brushes were able to pull the oils from the top of the hair follicle to the tip, helping to fortify the hair and make it shine.

Since the late 18th century, hair brushes have evolved to take on a few distinctive shapes, many of which are still in use today. 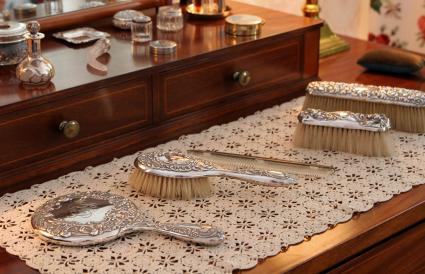 Antique hair brushes generally include two different materials, that of the handle/base and that of the bristles. Over time, technological advancements and manufacturing feats shifted brush production from these ornate, natural bristle brushes to synthetic, bakelite, or plastic brushes. During the Victorian period, hair brushes were seen as a status symbol, and many commissioned custom brushes made out of luxury materials. These are some of the common materials used over the past few centuries to make hair brushes out of.

In addition to brush frames, antique hair brush bristles were crafted out of a variety of both synthetic and natural materials. Boars hair bristles were historically considered to be the highest quality bristles available, though there are a plethora of old hair brushes with other bristles to be found, like these bristles below. 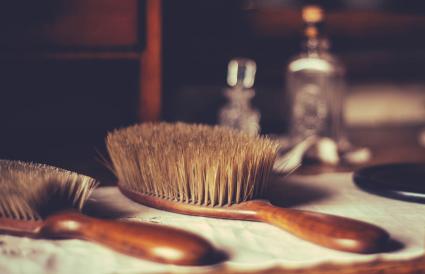 Since hair brush manufacturing began in 1777, a few notable companies rose to prominence for their superior craftsmanship and marketing strategies. These include Kent Brushes, Fuller Brush Company, and Mason Pearson.

Given their beautiful aesthetic quality, antique hair brushes are constantly being cycled through auction website listings and in local antique stores and consignment shops. Since these items aren't particularly rare to find, their real value comes in their condition and quality. Some of the materials used to make antique hair brushes are prone to signs of wear (such a scratches on wood and patina on silver), so brushes with little damage are worth significantly more than well-used brushes. Similarly, brushes made out of valuable material and/or are highly decorative are priced higher than plainer looking brushes. For example, an average antique enamel brass brush from the late 19th century was sold for $30, while an antique silver plated hand mirror and brush set can be sold for about $70. Most antique hair brushes can be valued between $20 - $100, while truly pristine, rare brushes can be sold for under $500.

Interestingly, depending on their condition, antique hair brushes can still be used today. If you catch yourself wanting to replicate every period drama film you've ever seen by brushing through your long locks with the antique hair brush you've acquired, then be sure to soak the brush in washing soda dissolved in warm water first in order to clean it and soften the bristles for modern use.