Funko Pops are worth collecting if you are an avid collector, but the average person should weigh the pros and cons before diving into this marketplace. While it is true that some Funko Pop Vinyls do offer a good investment opportunity, there are a few things you should consider before making any purchases.

Collecting Funko Pops Can Be Worth It!

There are several instances where Funko Pops have become quite valuable and their owners have turned a nice profit. However, most Funko Pops collectors aren't in it for the money; they are genuine collectors.

The biggest pro for starting a Funko Pop collection is because it is something you like and enjoy collecting. A positive for collecting Funko Pops is you have a wide choice of toys to collect and will never run out of options. This is a huge plus for anyone who wishes to collect Pop Vinyls.

Adding Limited Editions to Your Collection

One thing you can bank on is buying a Funko Pop Vinyl that has a small limited number produced, such as special editions that only have 10 units manufactured and you luck on purchasing one of them. You will need to know this information upfront if you wish to pattern your buying habits.

You can open the box that your Pop Vinyl comes in without destroying its value. Unlike some collector toys, the Funko Pop display boxes are not sealed. This is a big check in the pro column since many Funko Pop collectors who enjoy displaying their collection outside the boxes. Some collectors display the toys on top of their respective empty boxes, while others store the boxes and display the toys on shelves or in cases.

A collector often competes to purchase newly released Chase Pop Vinyls. Chase Pop Vinyls are variants to the regular character and are produced as limited editions. Sometimes the series can be as low as 10 only. These variants can be something as subtle as a different hair color or as dramatic as a metallic variant. With so few of these produced, their value immediately goes up the moment you purchase one.

Some Pop Vinyls are produced strictly for promotional purposes and are exclusive to that company or event. These are also limited editions that you won't find once the promotion or event has ended. By virtue of exclusivity, these Pop Vinyls will certainly increase in value. Your biggest challenge is to get one before they are scooped up.

One thing that makes collectors excited about owning a Pop Vinyl is the often-limited supply. Some of these are revealed during a toy fair but are a common feature at a Comic Con where people stand in line for a chance to make their purchases before the limited release is sold out.

It might not be a huge jump in value, but your Funko Pops will eventually increase in value. These square-headed, black-eyed toys are released regularly as part of a new movie paraphernalia that collectors gobble up or other product lines.

Funko Pops Are Cheap and Easy to Purchase

You can find Funko Pops in many retails stores, online stores, the Funko website, and eBay. Unless you're buying a limited, exclusive, Chase, or vaulted Franko Pop, you can purchase the toys for as very little as $8 to $11 and higher.

A Never-Ending Supply of Funko Pops

If you wish to start a collection of Funko Pops, decide what you wish to collect. For example, there are well over 20,000 differently Funko Pop creations. You may like Disney and wish to start collecting the various licensed Disney characters as Pop Vinyls. Perhaps you're a Marvel fan and are looking for a related Spiderman or Ironman Pop Vinyls to collect.

You may focus on purchasing some vaulted Pop Vinyls. The vaulted Funko Pop is one that has been selected to be decommissioned. This means the production of the toy is stopped or retired.

This is the kind of Pop Vinyl that collectors swoop in to buy. While collectors buy on the premise that the vaulted toy will increase in value, this isn't always the case.

There are a few cons for buying Funko Pops, but mostly revolve around collectors only interested in reselling their toys. There are several factors that go into the resell value of Pop Vinyls, such as the popularity and demand of the toy. 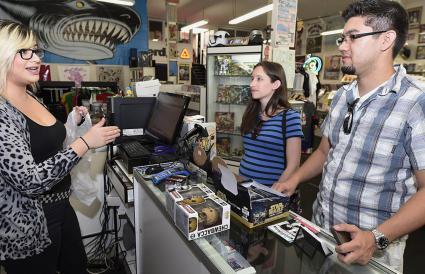 The con for purchasing exclusive, limited, Chase, and vaulted Pop Vinyls is only if you're depending on reselling the Pop Vinyl for a higher price. You may not see that anticipated return on your investment. The resell value of these Funko Pops depends on how popular the toy is and if it grows in demand once it is vaulted.

Most Pop Vinyl collector expect the original box to be included in their purchase. Since opening the box doesn't lessen the value of the toy, it's easy to misplace the box. You can still sell your Pop Vinyl, but it will be for a lesser price without its box.

As with anything you may decide to collect, you want to examine your reasons for starting a collection. If you're in it strictly for the money, you're in for a bumpy ride. It is almost impossible to predict which Pop Vinyls will become valuable.

The number in the series is indicated on the box packaging, but this can be confusing since the numbers run consecutive in each series run. You can end up with two different lines with toy characters having the same number. You can also end up with a break in the series number if the line is interrupted, and another line is run using the next numbers in the series.

Pop Vinyls don't always go up in value. For example, if a toy is vaulted, exclusive, limited, or a Chase Pop Vinyl, these have been known to go up in value and then experience a sudden drop in price. You just never know how the prices will fall out.

Many Pros and Cons for Collecting Funko Pops

There are many reasons you may decide to collect Funko Pops. You can easily get started with a few inexpensive Pop Vinyls. You can then begin to add a few exclusives, Chase Pop Vinyls, vaulted, and limited additions if you follow the market.

Comments
© 2006-2021 LoveToKnow, Corp., except where otherwise noted. All Rights Reserved.
Are Funko Pops Worth Collecting? Pros and Cons