Since Elvis first shook his guitar, posters have announced upcoming shows and enticed audiences to rock along. Today, collecting rock posters is a popular pastime, and dedicated buyers may spend tens of thousands on a very rare piece. But there are enough affordable posters out there for new collectors and the trick is knowing what you are looking at and finding where to buy.

The earliest rock posters appeared in the late 1950s, with the advent of performers like Elvis Presley, Johnny Cash and The Beatles. Posters were printed to attract audiences; promoters would put up posters on telephone poles and in public spaces. The posters featured photos of the performers, listed some of their hit songs, and gave the show date. In addition to local shows, bands also played at venues like Shea Stadium and The Fillmore East in New York City, which printed their own show posters.

By the mid-1960s, rock and roll had headed west to California, where the psychedelic scene was in full swing and bands like Jefferson Airplane were taking off. The rock posters from that era reflected the colorful, eccentric hippie world of the Haight-Ashbury area, with bright colors, wild designs and even the ability to glow in the dark (if the right ink was used.)

There are two major areas of collection: boxing posters (which include promo posters) and psychedelic posters, and each area has its own rules for collecting, including condition, design, and provenance or origin. 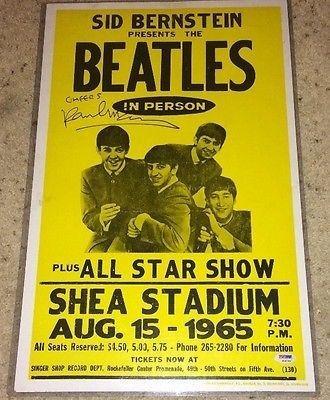 Thousands of bands and performers crisscrossed the country and they were advertised by boxing posters. Also called concert posters, these posters resembled those printed up for boxing matches. They averaged in size about 14" x 22" and had bold, clear typography (lettering) which made them easy to read from a distance.

Photographs of the entertainers were included, along with the names of opening acts and sometimes the band's hit songs. Watch for these posters at flea markets, yard sales, paper and memorabilia shows, or you can purchase direct from dealers. You can find information about rock posters in a number of books, including The Art of Classic Rock or The Art of Rock Posters from Presley to Punk. Here's what to look for when buying boxing posters: 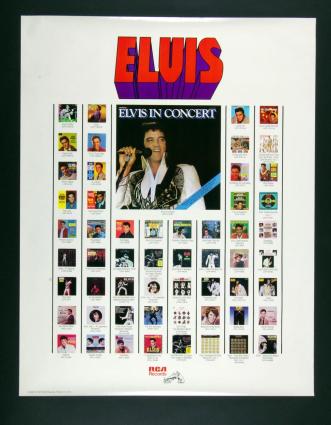 Record companies printed posters to promote their artists, and these "promo" posters have developed their own following. The posters announced an upcoming record or tape, and often showed the artist and/or the album cover. Dates and performance sites were not included. The early posters (1950s and 1960s) are difficult to find.

Elvis tops the list of many collectors - a grouping sold at auction for four times the expected price. Next, come the Beatles, and their promo posters command thousands for the early examples. 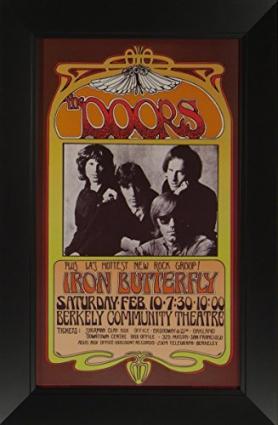 These bright, eye-popping works of art blended color, dense design, and Art Nouveau's flowing styles into a new art form. During the 1960s, rock and roll was king. Add in drugs, hippies and free love, and this was a time of experimentation in music and art.

Rock posters of this era reflected the new emphasis on freedom, and pushed the boundaries of convention which were made famous by Woodstock, and bands like Jim Morrison and The Doors.

Among the most famous rock impresarios was Bill Graham, who owned the Fillmore East and Fillmore West clubs. Graham commissioned posters to promote the shows and the quality of the poster designs began a collecting frenzy which is still going on. Graham posters were difficult to read because of the elaborate typefaces, but each was a piece of art. Graham hired artists who became famous for their poster art, including Stanley Mouse and Victor Moscoso.

Original psychedelic posters can vary in price from a few hundred dollars to $5000 or more if the poster is sold at an auction. Here are a few tips if you want to get into this collecting field:

Poster art is alive and well today with a huge fan base, and modern rock and rap posters are available with prices starting under $100. Some posters are silkscreened, others printed and the value varies with condition, artist and designer.

The difference between a reproduction and a fake is intent; a reproduction is not meant to deceive the buyer, while a fake does just that. Poster art has been reproduced so many times, it's sometimes difficult to tell the difference between an original, an early reprint, and a later reprint of the same poster. Here are some tips to help you avoid mistakes when buying.

Brick and mortar poster shops can be found around the country, but the best poster selection is available through online shops like those below. All of these sites offer detailed information about the posters for sale, including condition, history and style. Just remember, competition can be fierce for the classic posters!

Whether for fun or for profit, collecting classic posters is challenging, fun and very cool. Get into the action and start rocking on.