Not only is Frankoma Pottery highly sought after by collectors, the company itself is of great historical significance to the state of Oklahoma. The company has a fascinating history, from its beginning during the Great Depression to modern day production. Discover the history and unique characteristics of this highly collectible pottery line.

With the opening of Frank Potteries in 1933, John Frank became proprietor of Oklahoma's first commercial producer of pottery. After just a year of operations, the enterprise's name was changed to Frankoma Pottery. For the company's first few years, Frank divided his time between teaching duties (ceramics) at the University of Oklahoma and his pottery business. In 1936, he stopped teaching and began focusing full time on Frankoma Pottery. 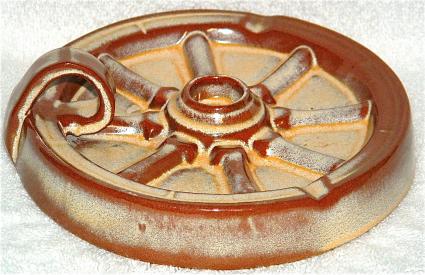 Frankoma Pottery operated in Norman, Oklahoma from 1933 to 1938. The business was moved a bit over 100 miles away to Sapulpa, Oklahoma during 1938. The Sapulpa plant was destroyed in a fire during its first year of operation, but was rebuilt.

After Frank's 1973 death, his youngest daughter, Joniece Frank, took over the business. An artist, Joniece was well-prepared for operating Frankoma Pottery, as she spent 13 years working with him before inheriting the company.

In 1938, The Frankoma Pottery factory was once again destroyed by fire (having previously burned in 1938). Thanks to a fireproof storage room for the pottery molds, they were spared. The factory was rebuilt and continued to operate, though the business never fully recovered. Frankoma Pottery closed in 1990.

In 1991, the company was purchased by Richard Bernstein, an investor and pewter maker based in Maryland. Following the sale, Joniece Frank remained with the company as VP and Kyle Costa took over the reins as president. 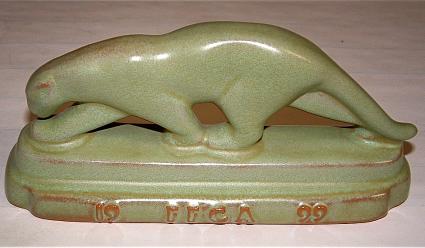 Joniece and her sister Donna founded the Frankoma Family Collectors Association in the mid-1990s. Based in Sapulpa, the association remains active today. The group hosts events that provide collectors with an opportunity to gather and network with one another.

The company changed hands several times during the 2000s.

In December 2012, pottery pieces began being produced under the Frankoma Pottery name once again. Current items can be ordered via FrankomaPottery.com. Custom pieces can also be commissioned.

While many antiques and collectibles have a single definitive mark, that is not the case with Frankoma Pottery. Markings on this pottery line changed several times over the years. For example:

There are coloration differences in Frankoma Pottery relative to the clay type and additives. As a result, the coloring of the unglazed portion on the bottom of a piece can reveal its production era.

The Frankoma line includes a wide variety of pieces. Visit eBay, Etsy, or LiveAuctioneers.com to get an idea of current asking and selling prices. Examples of values and prices include:

Want to learn more about Frankoma Pottery? Request a free copy of the Frankoma Reference & Price Guide by Robert and Vickie McBain, via the Frankoma Collector's Association website. If you subscribe to the website, you can also receive a free copy of The McBain Frankoma Book. Additionally, you may want to check out one or more of the other interesting books about Frankoma Pottery, each of which provides a wealth of information.