Identifying which Funko Pops are rare requires understanding the number of Funko Pops made for set. You can also look for Chase Pop Vinyls as possible valuable collector Pop Vinyls.

While it is impossible to know when a Funko Pop toy is first released if it will become valuable. The rarity can often be determined by the number of pieces released or if the Pop is a limited edition.

What Makes a Funko Pop Rare?

The main factor that makes a Funko Pop rare is when there is a small number of pieces produced and if it is a regular or Chase Pop Vinyl. These factors alone don't guarantee that that your purchase will become valuable, but if it is part of a limited quantity, such as only 48 pieces produced, then you can be certain it will quickly become a rare commodity. How valuable depends on the demand of collectors.

What Is the Rarest Funko Pop?

The rarest Funko Pop may be the 2016 Golden Ticket 2-pack Golden Version of Willy Wonka and Oompa Loompa. In addition to the Funko Pops, the four winners were treated a tour of the Funko factory. 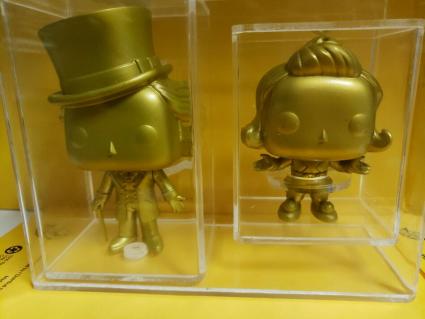 There were only 10 sets of the 2-pack Golden Version Willy Wonka and Oompa Loompa made. Only four were distributed to the four Golden Tickets found in the Funko branded chocolate bars. It's long been rumored that the remaining six 2-packs were distributed to Funko employees. To date, none of the 2-pack Willy Wonka and Oompa Loompa sets have surfaced for sale.

What Is the Most Valuable Funko Pop?

While it is often debated which Funko Pop is the most valuable, many collectors argue that the two exclusive Metallic and Platinum Stan Lee Pop Vinyls take the prize. This series was designed by Stan Lee and each design only had 10 pieces produced. 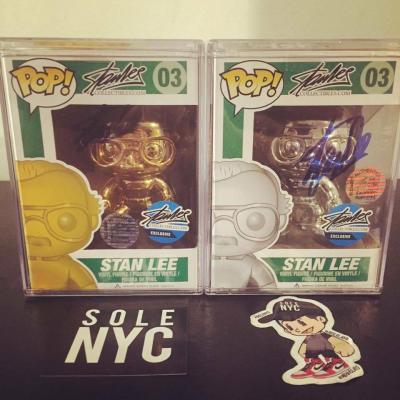 Only 10 Pieces Per Design

Each one also has an authentication certificate signed by Stan Lee. With his passing, these prized Pop Vinyls continue to go up in price with one selling on eBay for $9,000.

What Does a Chase Sticker Mean?

If a Pop Vinyl features a Chase sticker on the box, you can use it to help you identify how the Pop Vinyl is different from the regular ones released. This sticker is located on the lower righthand corner of the box. You can use the Chase sticker as an identifier that the vinyl Pop inside the box has a smaller number produced than a regular Pop.

The number of Chase Pop Vinyls made are significantly lower than regular Pops. This can be as few as 48 to 1,000+. It stands to reason that the fewer Pops created, the rarer they are. However, just because a Pop may be rare doesn't necessarily mean they are more valuable. If collectors aren't excited about the Chase Pop Vinyl and aren't excited about collecting, the price might not be much more than a regular pop.

What Are Vaulted Pop Vinyls?

A vaulted Pop Vinyl means it has been decommissioned and is no longer being produced. Whenever a Pop Vinyl is vaulted, come collectors grab them, in expectation the Pop Vinyl will become valuable.

A vaulted Pop Vinyl may not immediately increase in value since you can often continue to purchase them, sometimes at discounted prices. The demand determines how valuable a Pop Vinyl becomes.

How to Purchase Pop Vinyls

Another way to get Funko Pops is to attend the Funko Fundays. You will receive a box of assorted Pop Vinyls, along with different opportunities to win door prizes.

The Pop Vinyls sold at a Comic Con, such as the one at San Diego feature Comic Con exclusive editions with the specific Comic Con sticker. It's impossible to predict which of these may become valuable, but you can be certain they are in a limited quantity, so they soon become rare, especially when the demand increases.

Older Pop Vinyls May Be Valuable

Some Pop Vinyls (unmarked) may be rare and valuable Funko Pops simply because of their age. These Pop Vinyls are no longer being produced and offer special design features that collectors appreciated.

Ways to Authenticate Your Funko Pops

There are ways you can authenticate your Funko Pops, such as the art on the box, the stickers on the box, fonts used, barcodes, factory codes, and the figurine design. Many collectors choose to use the Pop Price Guide authentication service. The Whatnot app connects to a community of buyers and sellers of authenticated collectibles. Whatnot checks out every item for its condition and authentication.

Easy to Identify Funko Pops That Are Rare and Valuable

It's easy to identify rare and valuable Funko Pops when you know what to look for in the packaging. There are several authenticating options for novices to ensure your purchases are not counterfeits.