If you have parents or grandparents who were children during the mid-20th century, chances are high that you've heard about the vintage Barbie Dream House and how much fun your family members had exploring this adolescent foray into adulthood using characters like Barbie, Ken, and Skipper. Over the course of the next 60 years, Mattel has launched numerous iterations of this original Barbie Dream House, all of which are coveted by Barbie collectors today.

There were seven pre-millennium editions of the Barbie Dream House made, and a few of these have significant appeal to contemporary collectors because of their varying interior designs that reflect the different periods in which they were released. See if you remember having any of these Barbie Dream Houses when you were a kid.

The original Barbie's Dream House was a portable playset that unfolded into an open-area home space which Barbie could stand in. Made out of cardboard, this playset came with a bunch of different cardboard interior pieces like chairs, sofas, tables, and the like that you could easily assemble. This playset particularly reflects the Mid-century Modern style that was popular during the year it was released (1962), and reproductions of it can be bought on the Mattel website. If you're in the market for buying an original one of these, then you'll find them priced between $100-$200, like this listing for $185, depending on their condition and how many pieces of the original set are still there. 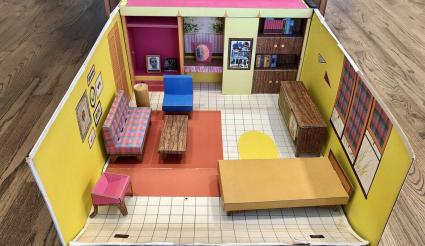 This was the second iteration of the Dream House. It was released in 1974 and added many features to the previously simple design. This house featured three stories and came with a built in elevator so that kids could move their Barbies up and down the different floors. These sets are actually similarly priced to the original Dream House, like this one listing that comes with the original box, which is for about $150. If you already have the shell of the house, but lack the appropriate furniture, you can find blow-up plastic furniture sold separately for about $15-$20 each. 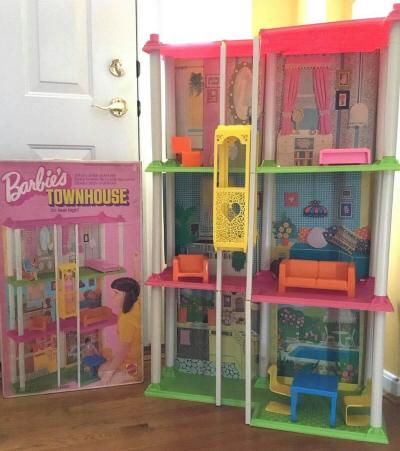 In 1979, Mattel released an entirely new design for this year's version of the Dream House, which boasted the popular slanted A-frame roofs of homes at the time. This brightly colored set was the most complex fabrication the company had created thus far, and was fully enclosed, featuring French doors that led to a balcony and terrace planters on the windows. Once again, this vintage playset is also worth between $100-$200, with replacement accessories costing about $10-$20, but if you already have one of these Dream Houses in some state of disrepair, you can use this digital version of the owner's manual to put it back together. 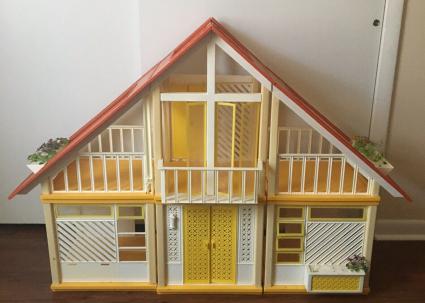 By the 1980s, Barbie was acquiring some serious real estate. Her 1983 Barbie Dream Cottage included the same bright orange and yellows of the A-Frame house but had an open floor plan with an enclosed rooftop that could be used for imaginary pool parties and barbeques. While not as collectible as the previous homes are, this set can be worth between $100-$150. For example, one seller has listed a Barbie Dream Cottage with the original instructions for about $150. 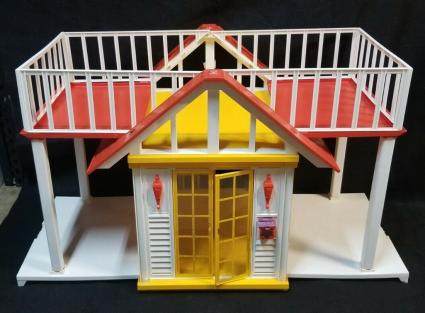 It's hard to believe that the 1990 Barbie Magical Mansion is considered a vintage item, but many '90s kids would fondly remember the huge estate that was this sprawling pink palace. At this point, Barbie had absolutely moved into a life of luxury. However, since memories of this house are still prominent in a lot of young adult's minds, sets are harder to find and are worth less money at about $100 each.

How the Barbie Doll Become a Phenomenon

According to Mattel's (the company who launched Barbie) website, "Ruth Handler, co-found of Mattel, observed her daughter Barbara playing with paper dolls for hours…[which] sparked [her] vision to create a 3-D doll for girls to play out their dreams." Quickly, Barbie became the biggest toy doll available, and Mattel expanded her catalog to include new outfits, friends, accessories, automobiles, and play sets. Amid this Barbie-mania, Mattel devised a portable playset titled the "Barbie Dream House" and launched it in 1962. Subsequent versions of this Barbie-themed doll house came every few years, with each new generation of child being introduced to the design-specific house of their era. The Barbie Dream House is still incredibly popular today, with the company currently selling a Barbie Dream House that comes equipped with a pool, slide, garage, and elevator for about $200.

To Collect or to Play With the Barbie Dream House

If you're one of those who is emotionally attached to your childhood Barbie Dream House and want to pass it down to someone in your family, no need to worry. While Barbie collectors are some of most zealous toy collectors around, these playsets aren't nearly as desirable as limited editions of the dolls themselves. Also, these sets are relatively sturdy and can withstand a lot of abuse. So, you don't have to worry about feeling pushed to sell your favorite childhood toy because there are plenty of these sets on the market.