Say the words 'French bread board,' and you can practically smell the rich aroma of baguettes fresh from the oven. Perhaps this blissful sensory daydream is what entices people to collect vintage boards in the first place, but there's more than that to keep collectors interested.

Use Of Bread Boards

No French home is complete without a baking oven, and bread boards are a necessary tool when baking different types of breads. Some boards are huge enough to accommodate ten or twelve big round loaves of bread and have a handle on one end so they can be used to transport large baked items to and from the ovens. Others are long and skinny and are the perfect size for a single baguette.

Still other boards are used to place slices of bread on the table; this type of bread board is the smaller, round bread board that was sometimes carved around the edges. Vintage (approximately 50 years old) and antique (more than 50 years old) bread boards are fun to collect, and they can easily be put to work in anyone's kitchen.

Bread boards come in different shapes and sizes that make them ideal for specific uses.

The materials used for early French bread boards have changed over time.

Early bread boards were normally made either by someone in the household or by the people working at the bakery. However, some were manufactured. For example, Bérard of France has been making bread boards and other wooden items for the kitchen since 1892. The company uses beech wood, box wood and cherry wood from certified forests, and it utilizes 100-percent of the wood it harvests for its products. Unfortunately for collectors, very few vintage bread boards were signed by the maker since these boards were not considered works of art.

Every home owned one or two bread boards which were carved by the man of the family and used by the family as a utilitarian piece. Early boards are roughly carved, and the handle that is used to hang the board usually shows the marks of the tool used to create it. Some were even originally part of some other object and not meant to be a bread board from the start. For example, there are a number of bread boards for sale that were originally the tops of wooden barrels, but their shape and size made them perfect for re-purposing as bread boards. 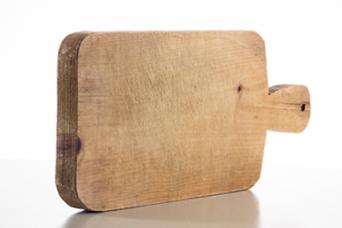 Bread boards are not usually signed by the maker so if you see a signature and the board is glossy or well-oiled, be suspicious of its age. Older bread boards usually show signs they've been used. Look for:

The new boards are often made of walnut and are much darker and smoother than vintage baguette boards. The major difference is that contemporary bread boards look more polished and are less likely to show wear from many years of family gatherings and long hours baking.

Once you've fallen in love with wooden bread boards, you'll need to know where you can find them.

Antiques shops, especially those which ship some of their goods by container from Europe, are the best place to find vintage French bread boards. The brick and mortar shops are best because if you can't find what you're looking for, you can ask the owner to search for you. Antiques dealers are immersed in finding items because they can't just call a factory and say, "Make me some vintage bread boards." Dealers visit auctions, other dealers' establishments, and often buy households full of goods, as well as finding contacts to bring antiques in from other countries. Make friends with your local dealer!

eBay is a huge online source for specific items. Conduct a search and use all the terms to find the board you want. For instance, if you want to see everything that's available, search for "vintage French bread boards." If you just want a circular one, search for "circular bread boards," but remember that the ones you find will be all the circular bread boards, so you'll have to go through your search results to see if any of them are actually French. Some eBay dealers advertise items that you can purchase immediately while others conduct an auction. Just be careful not to get caught up in auction bidding and wind up spending too much for your board.

Etsy is a group of online shops where dealers sell everything from homemade bookmarks to designer pieces of furniture. A recent search for "vintage French bread boards" netted almost 100 dealers who had some kind of French bread board for sale. Some were vintage, some were new, and some were antique, but all were interesting.

Specialty dealers sell their items online, and you can conduct a simple online search for "vintage French bread boards" and discover dealers who regularly sell this item. For example:

Two elements determine price when you're collecting vintage items: age and condition. When collecting wood items that were work horses, welcome those splits in the wood, those wormholes, that uneven handle. All of these elements add character to work-day items that make them even more valuable to collectors and even more loved by chefs who still embrace old tools and tried-and-true recipes.

Note: These prices are averages for items sold on eBay and other sources referenced in this article.

Most of the vintage French bread boards you will find for sale today date from the late 1700s (ca. 1780) to the mid 1940s. The large round bread boards usually date from the 1800s. After the turn of the century, home bakers (and larger bakeries) began making their bread in tins or cast iron pans instead of on the floor in brick ovens. The bread board handles were shortened, and the boards were made smaller since bakers did not need to carry several loaves on the one large round bread board they had previously used.

Caring for Your Bread Board

If you are lucky enough to find a vintage or antique bread board, be sure to care for your treasure properly.

One of the beautiful things about collecting these lovely wooden boards is that each one is different. All of them have aged in their own distinct way, so you will never find any two that look the same. Remember that the first rule in collecting is to buy something you love. If you can display your bread board and/or use it, all the better, but love it first!