Vintage cookbooks come in the wildest array of colors, styles, and culinary themes, and they line bookshelves in hardback, paperback, cardstock, and spiral bound editions. The most iconic image of vintage cookbooks comes from the 1960s and 1970s, and a recent surge of nostalgia for the odd recipes enclosed within them has made them a desired collectible. Before you start pulling every old cookbook off of the consignment store shelves, you should know a few details to look out for in order to make the best choice.

Vintage cookbooks come in all shapes and sizes, but not every edition is as easily discernable as others, and some of the least 'cookbook' looking books might be worth the most at auction. 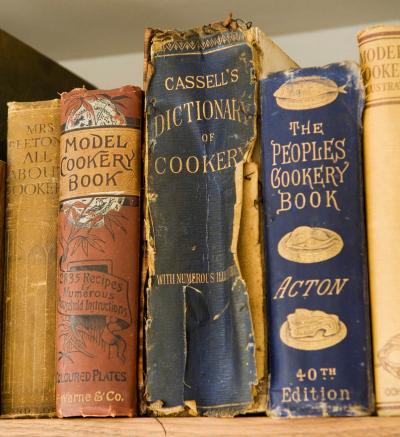 There are a few characteristics concerning vintage cookbooks that can affect their resell values; among these include their physical condition, age, historic popularity, and niche.

Since cookbooks are meant to be referenced throughout the cooking process, many of them receive unfortunate stains and smudges from errant gravies, sauces, and spices. Thus, vintage cookbooks with some degree of noticeable use are valued at higher rates than other vintage items with similar wear and tear. However, vintage cookbooks in pristine condition will still fetch significantly higher amounts than those with noticeable wear.

Vintage cookbooks that come from iconic chefs and/or recognizable institutions are much more likely to be valued by amateur collectors than obscure books will be. Cookbooks from domestic-oriented institutions like Better Homes and Gardens and food manufacturers like Betty Crocker ignite the nostalgic desire within vintage collectors. Similarly, even those who aren't chefs are intrigued by the instructions of culinary giants like Julia Child and Martha Stewart.

Interestingly, vintage cookbooks that focus on either 'exotic' cuisine or specific culinary acts (like grilling) have their own select group of devoted collectors. The prominent appraiser, Dr. Lori Verderame, attests that these "oddities bring value."

Notable Vintage Cookbooks to Look For

The cookbook has a long history, and archaeologists have even found clay tablets bearing recorded recipes in the area that once was Ancient Mesopotamia. However, cookbooks as you know them today were first developed by Fannie Farmer for her 1896 cookbook, The Boston Cooking-School Cook Book(now known as The Fannie Farmer Cookbook). In it, Farmer helped formalize the recipe format that most cookbooks follow to this day. Following Farmer's initiative, many notable cookbooks have taken the world by storm, and these are just a few to look for.

As previously mentioned, condition and popularity are two of the most significant factors that influence how much vintage cookbooks bring at auction. For example, a 1951 edition of the Better Homes and Gardens Cook Book recently sold for $25, while "Martha Stewart's debut book…Entertaining is worth $100 today" according to Dr. Verderame.

One way for you to be able to estimate the value of your own vintage cookbooks without having to have them appraised is to visit Book Finder. This digital catalog allows you to look up a specific text and compare what its currently being listed for at a variety of retailers. Since Book Finder actually tells you the condition and year of the editions being sold, this is a really invaluable resource for valuing your vintage cookbooks.

Put Your Vintage Cookbooks to Use

While these colorful collectibles can be quite valuable, half of the fun of having these cookbooks around is experimenting with vintage recipes. Perhaps try making your own Drum Cake to round out your holiday menu from the Betty Crocker's Cookbook for Boys and Girls of 1957. Or you can put your own spin on these classic recipes to give you and your family a true taste of the past.

0
Comments
© 2006-2021 LoveToKnow, Corp., except where otherwise noted. All Rights Reserved.
Resources, Advice & Tips for Covid-19
Read More
Collecting Vintage Cookbooks: A Taste of the Past