The search for rare Swatch watches has taken the planet by storm in recent years. When even the brand name inspires infectious feelings of fun and frivolity, everyone soon wants a piece of the action.

The Road to Collectible Pop Culture

At a time when once glorious Swiss horology enterprises suffered the threat of obliteration, the Swatch brand emerged to resurrect the industry single-handedly. Armed with a simple idea of merging cheeky playfulness and inexpensive materials with durable construction and precision movements, Swatch made its initial mark on the timepiece world in the early 1980s. Under the leadership of Ernst Thomke (of ETA SA Manufacture Horlogère Suisse) who put together a crack team of engineers helmed by Elmar Mock and Jacques Müller, Swatch set about the task of redefining Swiss craftsmanship.

Recognizing that creating a good quality timepiece would not reinvigorate Swiss horology, Swatch conceived a precision engineered plastic watch with a double-duty case back that also served as a movement main plate. The results of such innovative thinking produced an array of bold and colorful pieces that looked like mere novelty watches but kept time like pros. Placing an emphasis on chic fun, Swatch launched their collection in 1983 with a pricing structure that nearly everyone could afford. Thus, a future collector's item was born.

The popularity of Swatch watches peaked by the mid 1980s. Among the trends associated with Swatches are wearing more than one model, using them as ponytail holders and attaching them to clothing. This era of prosperity also marked the introduction of designs created by artists like Keith Haring, a move that added an air of style swank to Swatch's trendy reputation. 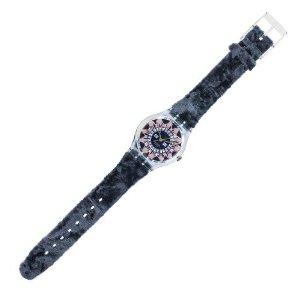 Like other companies, Swatch's continuing success relies on the steady introduction of new and innovative products, which makes any Swatch manufactured before the mid 1990s somewhat rare. Limited edition or themed Swatches are even harder to find and fetch significant prices at auction.

Other than watches from the family of originals, limited edition models are usually the most rare and valuable Swatches. To form an idea of what constitutes a rare Swatch, check out the examples of limited edition and special release models listed below.

While some people enjoy rare Swatch watches because of their collectability, others believe their true value lies in their unmistakable fashion statement. For budget fashionistas in search of cheap chic watches as well as amateur collectors, Swatch imparts an esteem that time won't soon forget.