Matryoshka dolls have remained a popular commodity in both large and small towns across the vast Eastern European landscape, perhaps being considered as the number one travel souvenir for the region, with antique Russian nesting dolls still captivating collectors today. Whether you grab a set from an online auction or purchase one on your backpacking trip through the European countryside, the journey these figurines have taken through history to fall into your hands is incredibly interesting.

While their folkloric craftsmanship makes these toys seem as if they've been around for hundreds of years, it's well-documented that they were actually first created in the early 1890s by the Children's Education workshop. Not many people realize that these toys were first crafted to be used as educational tools to teach children basic arithmetic, hand-eye coordination, and traditional stories. The very first doll is colloquially known as the "Rooster Girl," and the largest doll in her series is a classic Babushka character carrying a rooster in her arms. The workshop gave her the name Matryoshka, aka "little mother." Aristocratic patronage in the early 20th century helped bolster national Russian industry, and these beautifully painted figurines became a popular export. Despite the country's revolution and the subsequent downfall of later Soviet rule, these dolls are still being created by Russian businesses today. Unfortunately, the speed of industrial manufacturing has decreased the doll's quality, so finding an antique or vintage nesting doll is definitely your best option. 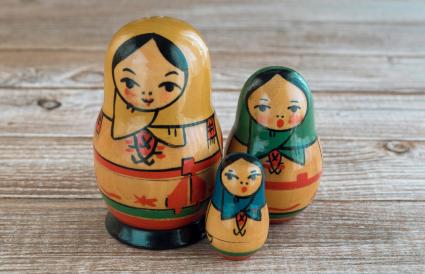 What Is A Russian Nesting Doll?

These 19th century toys go by many different names (Matryoshka doll, Babushka dolls, Russian tea dolls, stackable dolls, Russian nesting dolls, and so on), but all of them describe a set of rounded, bowling-pin shaped figurines which fit increasingly grow in size and are created to fit into one another. They vary in both size and design, and experts can tell what region they were created in depending on the specific style of the design on a Matryoshka set.

These dolls were made out of linden or birch wood, and each set was normally made from the same piece of wood to ensure any expansion or contraction within the lumber would be uniform across every piece. They were finished in illustrations that were applied with varying grades of paints and pigments. This was a security measure against potential warping within the pieces that could disrupt the fundamental 'nesting' quality. Additionally, the Russian nesting doll has come to be associated with fertility, and most of these antique figurines feature a mother with various children stacked inside of her body; across each of the figurines, a story pertaining to Russian folklore or cultural lessons is illustrated in a series of beautifully painted scenes that culminate in the final moment on the smallest one's belly. 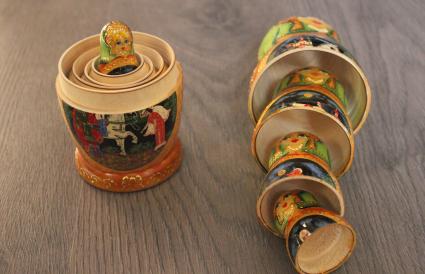 Here are a few of the different workshops that have manufactured these nesting dolls over the years, evidence of which you can find stamped and/or painted onto the bottoms and inside of these dolls.

Since these dolls are still in high demand by visitors to be brought home with them as souvenirs of their adventures, these dolls are relatively easy to find, both online and in antique stores. However, the older artifacts are harder to come by, and authentic 19th century nesting dolls are nearly impossible to find in an average auction. That being said, there are plenty of low-cost vintage sets available. On average, you can find old sets of these nesting dolls listed between $20-$200, like this 1960s trio of nesting dolls that is listed for almost $30. Many different factors influence these values, including: 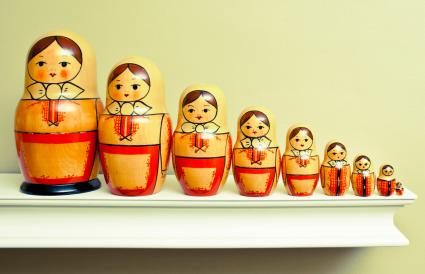 Nary a Dull Evening With a Nesting Doll

While having a complete set of antique Russian nesting dolls is certainly the goal, if only one or two of these collectibles have made their way into your hands, there are many unique things you can do to display it in a unique way. Yet, the most useful of all of these things is to use it for storage; you can keep extra buttons, car keys, and even cash in these colorful figurines with no one knowing the wiser, making these Russian cultural touchstones all the better to have.