Medicinal history is filled with fascinating stories of triumph and innovation, and the antique syringe embodies this progressive journey. Since the 19th century, doctor's have been using syringes to administer medicine directly into the body, and their necessary but macabre nature has made them a unique collector's items. Now you can begin filling your own doctor's bag with these interesting facts about antique syringes.

Historic Timeline of the Antique Syringe

The earliest syringes were made out of brass and rubber in the 17th century, and were used for a variety of semi-invasive procedures, like ear cleanings, enemas, and sexually transmitted disease treatments. By the 19th century, metal syringes were being attached with the hypodermic needles that were invented in 1953 and were moderately used by the medical professionals of the period; but, it wasn't until the 20th century that the syringe would evolve into what everyone is familiar with today.

Thankfully for most, the visual iconography associated with a syringe makes this collector's item easy to determine. However, contrary to popular conceptions, a syringe is the metal, glass, or plastic tube with a nozzle at one end that can be used to either suck up or eject liquids. Hypodermic (hollow) needles are not included in the definition of a syringe and are attached to syringes to allow medical professionals the ability to administer medicine deep into the body.

There are a few different ways to better identify the antique syringe that you may be looking at or that is already in your possession. These include looking at the materials it's made out of, any noticeable manufacturing information, and the period in which it was produced. 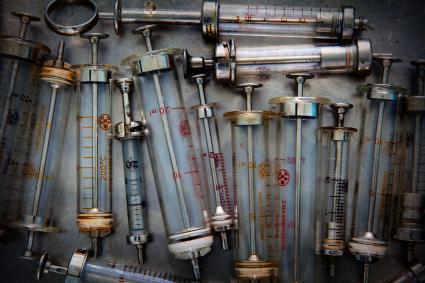 What Antique Syringes Are Made out Of?

Antique syringes are one of the more aesthetically pleasing historic medical tools because of the variety of fine materials they've been crafted out of over the past few hundred years. These are some of the materials you might find an antique syringe to be made out.

Given the fact that the aforementioned BD company cornered the market on manufacturing syringes, a significant number of antique (American) syringes you'll come across will bear the name Becton, Dickinson, and Co. Yet, the German manufacturer Dewitt and Hertz made a substantial name for themselves in the early 20th century, with user's relying on their dependability.

Dating antique syringes can be an imprecise art, but using the material they're made out of and a general timeline of syringe history, you can confidently estimate what period a syringe is from. Any plastic syringes or syringes with a removable barrel and plunger come from the latter half of the 20th century. Similarly, silver and brass syringes were typically used during the 19th century, before glass was routinely used and disposable syringes were invented. Thus, if you do a little historical detective work, you can better date your antique syringe.

There is always an interest in medical artifacts among both historians and niche collectors. Yet, not every antique syringe is going to be worth enough money for an all-expenses paid vacation to a private island; rather, most antique syringes can bring in anywhere between $20-$100 at auction. Factors that influence how much antique syringes are worth include the following: 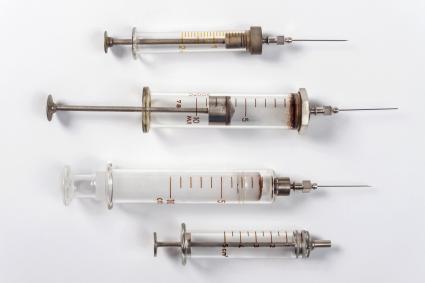 If you're in the market for an antique syringe, you'll definitely be able to find a reasonably priced one to add to your collection. Single syringes, like this antique glass syringe from approximately 1900 which is listed for $30, can be bought for up to $50. However, seasoned collectors fight over complete syringe sets, making these items pricier and more difficult to obtain. For example, a 1901 Antique BD Yale Medical Syringe Kit and Case is listed for nearly $100 at Memory Hole Vintage, and a Z.D. Gilman Vintage Nickel Syringe Kit sold for $60. Thus, if you're willing to put down a hundred dollars or so, you can find yourself welcoming a syringe set equipped with needles and carrying case into your home. 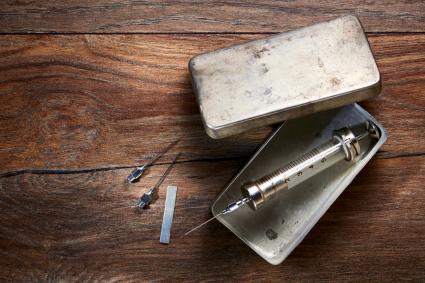 Since antique syringes were made with one explicit purpose, to break a person's skin and enter their body, there is some concern over how safe handling antique syringes is. While most communicable diseases will not be able to survive in these syringes and medical professionals of the period were taught to sterilize these tools (to a certain extent), there is nothing wrong with being wary of manipulating a used syringe. Therefore, if you have significant concerns over the potential hazards of manipulating antique syringes, always be careful to take proper health precautions like wearing medical grade gloves when handling the antique and thoroughly washing your hands when you've finished doing so.