Most modern canes are produced with function, rather than style, in mind, but antique canes and walking sticks have a unique history which intertwines social position and wealth with public fashion. Although not every antique cane and walking stick is bejeweled with large gemstones, they all exhibit expert craftsmanship and can be worth quite a lot of money to antique collectors.

Historically, Europeans used these walking aids to put wealth and social privilege on display; strict sumptuary laws of the Medieval period dictated what different levels of society were permitted to wear. Disobeying these laws was taken seriously by the government, and people faced fines and imprisonment for their crimes against the state. This meant that walking sticks and other items/styles of clothing were exclusively worn by the social elite, and thus became culturally synonymous with wealth and power.

Although these laws were eventually repealed, the lasting cultural effects of these laws meant that walking sticks and canes became a vital component of a gentleman's attire; being without these accoutrements, especially at high society functions, was seen as undignified and below one's station.

To the average eye, the terms antique cane and antique walking stick might appear to be interchangeable; however, there are important differences between the two that explain how they were designed and stylized. Canes/walking sticks are similar in the way that they both have four separate components: handle, collar, shaft, and ferrule (tip). Yet, the two differ in the materials used to make them, their durability, and their decoration. 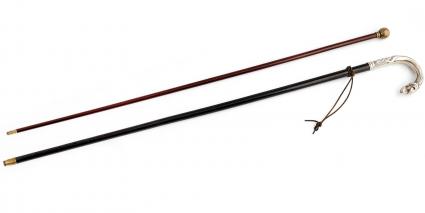 Antique canes were crafted out of sturdy natural materials like rattan, malacca, bamboo, and reeds. Canes were created to be more functional, though they could be encrusted with fine jewels in order to communicate one's social status to the world. Canes could be fashioned with either hook/crook, Fritz, Derby, or T-Shape handles, as these different handles could more easily bear a person's weight.

Antique walking sticks were created with the sole purpose of communicating status and being socially fashionable. These accessories were made out of valuable materials like whalebone, ivory, ebony, and many more. They were ornately designed and had jewels, sculptures, and metal adornments crafted into their bodies.

Once an antique cane or walking stick' s materials, balance, and aging are assessed by experts, they can then be subdivided into three different groups: gadget, decorative, and folk. These different categories help appraisers better identify the value of these individual pieces.

Gadget walking sticks married fashion and function in the 19th and 20th centuries; these walking sticks contained either hidden compartments or could transform into another device altogether. Sword canes and dagger canes show exactly how the gadget walking stick could be made deadly. Given that cane fighting became a popular way of settling arguments between gentleman in the 19th century, these gadget canes became increasingly popular. 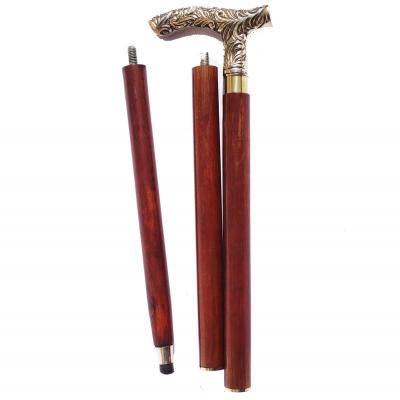 Canes and walking sticks which belong to this category are easily identifiable based on their artistic designs. These canes' handles are often carved into portraits of beloved animals, people, and geometric shapes. While most of these decorative handles are hollow, they can be sculpted out of various desirable materials like semiprecious gemstones, ivory, silver, and so on. 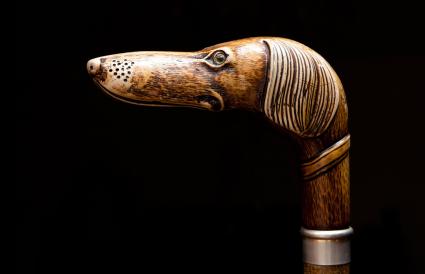 Traditional folk canes are less ostentatious than their decorative and gadget brothers; most often, they're crafted out of a single piece of wood and display traditional iconography from the folklore of the country they were produced in. One way that genuine antique folk canes and walking sticks can be authenticated is by using ultraviolet light to assess the wood stain's coloring; historic stains appear to be the same color under ultraviolet light as they appear under natural light. 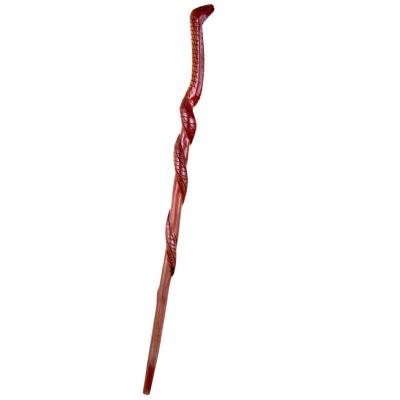 Most prominent cane and walking stick manufacturers were based in Europe and the United States, and antique accessories which bear the maker's marks from these companies can increase their resell value by thousands of dollars.

Brigg of London was one of the preeminent British cane and umbrella manufacturers during the 19th century. This company had dependencies in a number of European capitals and sourced their elegant handles from foreign imports.

This cane manufacturing titan was established in 1832 and employed upwards of 400-500 people in its London office. Unfortunately, this global company ceased production during World War I, which makes antique canes and walking sticks bearing their insignias incredibly valuable.

The French designer, M. Cazal, was well known for making luxury canes and parasols that were one-of-a-kind. In 2016, a lapis lazuli cane with a vermeil knob sold for $6,000 dollars at auction.

A. Schuman was another prominent manufacturer of canes and walking sticks, and the company was associated with having durable canes and using fine materials.

Founded in 1873, the R.F. Simmons Company was most well-known for its watch chains, and canes/walking sticks from this company are identified by their pristine metallurgical details. Similarly, a large portion of canes and walking sticks made by R.F. Simmons are marked only with their initials as this manufacturer was the first to do so in 1881.

The American fine jewelery magnate, Tiffany & Co., commissioned their master silversmiths and gem cutters to create canes and walking sticks for the American elite throughout the late 19th century and early 20th century.

Considering that historic canes and walking sticks were designed to be luxury items, quality antique examples can bring in a hefty sum at auction. For example, an antique gadget cane that has 8 interchangeable handles was estimated to be worth $600-$1,200, and a decorative cane from 1880 made out of whale baleen is estimated to be worth between $700-$1,000. In 2019, an understated sterling cane made by Tiffany & Co. sold for $400, while a Howell Co. decorative cane from 1900 sold at auction for $500. Ultimately, these antiques' values are predominately determined by the name of the company that produced them and by the monetary value of the materials they were made out of.

As with most antique fashion items, impressively manufactured modern canes and walking sticks can be marketed as antiques and sold for their steep prices. Given this potential, one of the best ways to ensure that a cane/walking stick is a genuine antique is to authenticate its materials. For instance, real ivory can be tested using at home methods (like sticking a hot needle into it and seeing if the material resists), and real metals might be obviously marked. Now, if you're trying to investigate your own cane/walking stick, taking it to a seasoned appraiser is your best option.

These decorative pieces of fashion history make wonderful family heirlooms, and many people hold onto their grandparents' and/or great-grandparents' canes to pay homage to them. Yet, you might want to consider placing your antique cane or walking stick up for sale because of the impressive amounts they are routinely sold for. However, should you choose to keep your antique cane or walking stick within the family, understanding its style, materials, and history will give you a more intimate connection to the person it first belonged to.