Equivalent only to Rolex in terms of worldwide popularity, millions of Omega wristwatches have sold since 1848, making vintage Omega watch identification a precarious task. While a few of their most notable series have lasted into the 21st century, early editions of these historic lines can be worth an impressive amount to collectors and horologists. It's time to better acquaint yourself with your vintage Omega timepiece using this simple guide.

The Story Behind Omega Wristwatches

Louis Brandt began the Swiss watch company in 1848 in La Chaux de Fonds, Switzerland. The company began as Louis Brandt & Fil and was christened with many different names over the course of the 19th century until the release of its 19-Ligne Omega Calibre timepiece in 1894. This watch's massive popularity inspired the company to adopt Omega as its lasting moniker. Considering that the company has actively manufactured timepieces since the mid-19th century, there is an enormous catalog of different Omega watches that could be hiding in your junk drawer or jewelry box.

One of the first elements to look for when identifying Omega watches is the company's name, as it should be listed somewhere on the dial (the inside face of the wristwatch). Many editions also feature Omega labeling on the back of the watch case. In addition, you will usually find the Omega letter from the Greek alphabet (Ω) included somewhere. Understanding what series of watch you have can greatly impact its value and help you determine if it is worth investing in being fixed.

This calibre watch was first released in August of 1894, and it set "a new standard for watchmaking" according to the company's website. It was incredibly accurate, but its true innovation was the ability for any component to be replaced by any watchmaker without needing modification. This Omega watch went on to become such a global phenomenon that the company adopted its name in 1903. Despite its popularity, finding one of these classic pocket watches is quite difficult and would retail for an exorbitant amount of money. 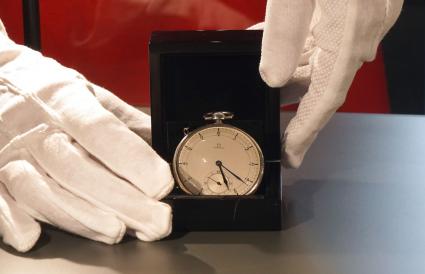 Omega released the Seamaster in 1948 as a celebration of the company's 100th Anniversary. The dive watch was crafted using techniques introduced by the British navy during World War II and became one of the watch manufacturer's most popular series. However, the Seamaster took popular culture by storm when actor Pierce Brosnan wore a Seamaster Diver 300M as the James Bond character in the 1995 feature film GoldenEye. The Omega brand has sponsored every James Bond film since. Due to this Hollywood connection, the Seamaster continues to be a prominent watch among watch-wearers. 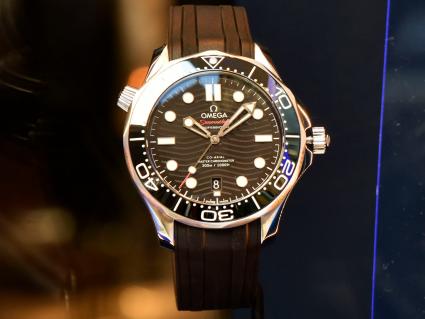 Omega Speedmaster aka "The Moonwatch"

The Omega Speedmaster claims to be the only watch that has ever been to the moon; astronaut Buzz Aldrin famously wore a Speedmaster on the Apollo 11 mission. Nicknamed "The Moonwatch," Speedmasters generally appeal to aerospace buffs or history nuts. However, vintage Speedmasters are not particularly difficult to find at auction. Yet, some editions have been sold for steep prices; at a Sotheby's auction in 2019, a 'Broad Arrow' from 1958 sold for a quarter of a million dollars. 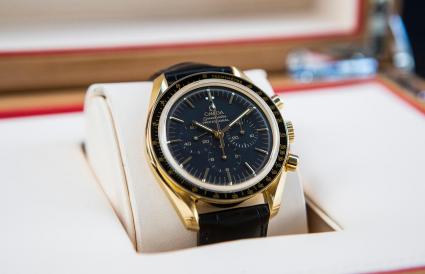 Omega's Constellation series continues to be beloved by both men and women alike for its luxurious design. Omega first produced these automatic chronometers in 1952, and vintage Constellations are easily identifiable by their pie-pan dials (domed dials that peak in the center and fall at the peripheries) and star symbols placed above the 6 o'clock mark. Omega created these fashionable watches to be more stylish than their previous models, and they are highly desirable to collectors. A 1956 Omega Constellation watch is currently listed for $2,400 at Antiques Atlas. 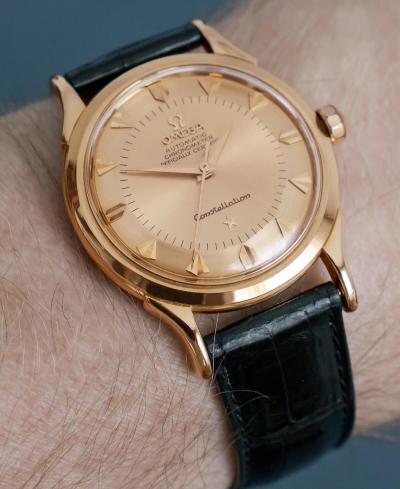 This run of Omega wristwatches became famous because of the 1983 film Scarface starring Al Pacino. The watches are highly collectible because Omega produced only 261 of them. One rare Omega La Magique is listed for a whopping $12,000 at auction.

The Omega De Ville, not to be confused with either the coupe de ville or Cruella, became its own independent line of wristwatches in 1967. Marketed for the younger generation, this streamlined wristwatch offered cases in a variety of shapes and is still considered the most luxurious Omega watch available for purchase.

As with most vintage jewelry, wristwatches and pocket watches are valued based on their age, condition, rarity, and the quality of the materials used to make them. Vintage Omegas can come in a variety of different materials such as leather, stainless steel, 14K gold, and 18K gold. Subsequently, the watch series can be an early indication of what materials were used in its making; Omega De Villes are often manufactured using expensive semi-precious metals and will have higher values than stainless Speedmasters. For example, Ashton-Blakey sold a solid 18K Omega De Ville from the 1960s for $1,795.

Caring for Your Vintage Omega Watch

While selling your vintage Omega watch is definitely an option for some owners, these watches' quality and lineage may discourage many from wanting to part with them. If you find yourself wanting to sport your new-old wristwatch on a daily basis, you'll want to be sure to use these helpful tips to take care of it properly.

Ultimately, Omega's longevity speaks to the fact that their watches are some of the most consistently reliable, luxurious watches that anyone can own, and their contemporary designs pay tribute to its past best-sellers. Thus, if you can't spare the hundreds of thousands of dollars on some new Omega watches, you might find yourself in the market for a less expensive vintage Omega.